Maths Physics a single vector that is the vector sum of two or more other vectors
Collins Discovery Encyclopedia, 1st edition © HarperCollins Publishers 2005
The following article is from The Great Soviet Encyclopedia (1979). It might be outdated or ideologically biased. 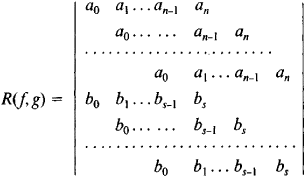 Let there be given the two equations P(x,y) = 0 and Q(x,y) = 0, where P and Q are polynomials in x and y. Suppose these polynomials are arranged according to powers of x, and the resultant of the polynomials obtained is equated to zero. An equation in y is then obtained of degree at most sn. Here, η is the degree of P in x and y, and s is the degree of Q. If x = x0, y = y0 is a solution of the given system of equations, then y = y0 is a root of the equation R(f, g) = 0. The process of solving a system of two equations is thereby reduced to the solution of a single equation.

The resultant of a system of forces is a force equivalent to the given system and equal to the vector sum of the forces: R = ΣFk. A system of forces applied at the same point always has a resultant if R ≠ 0. Any other system of forces applied to a body has a resultant, if R ≠ 0, when the moment of the system either is equal to zero or is perpendicular to R. In this case, the system of forces may be replaced by the resultant of the forces only when the body may be regarded as perfectly rigid. The system may not be replaced when, for example, internal forces are to be determined or when other problems that require the deformation of the body to be taken into account are to be solved. A couple and a system of two forces that are not coplanar are examples of systems of forces that do not have resultants.

[ri′zəl·tənt]
(mathematics)
For a set of polynomial equations, a function of the coefficients which equals zero if the equations have at least one solution. Also known as eliminant.
vector sum
McGraw-Hill Dictionary of Scientific & Technical Terms, 6E, Copyright © 2003 by The McGraw-Hill Companies, Inc.