After sound has been produced in, or enters, an enclosed space, it is reflected repeatedly by the boundaries of the enclosure, even after the source ceases to emit sound. This prolongation of sound after the original source has stopped is called reverberation. A certain amount of reverberation adds a pleasing characteristic to the acoustical qualities of a room. However, excessive reverberation can ruin the acoustical properties of an otherwise well-designed room. A typical record representing the sound-pressure level at a given point in a room plotted against time, after a sound source has been turned off, is given in the decay curve shown in the illustration. The rate of sound decay is not uniform but fluctuates about an average slope. See Sound 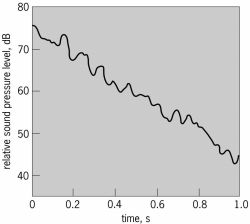 The buildup of sound within an architectural space, such as a room, as a result of repeated sound reflections at the surfaces of the room.
Illustrated Dictionary of Architecture Copyright © 2012, 2002, 1998 by The McGraw-Hill Companies, Inc. All rights reserved
The following article is from The Great Soviet Encyclopedia (1979). It might be outdated or ideologically biased.

the process by which a sound in an enclosed space gradually decays after its source ceases to emit. The volume of air in the enclosure constitutes an oscillatory system with many natural frequencies. Each natural oscillation is characterized by a decay rate; the absorption of a sound during its reflection from the boundaries of an enclosure and during its propagation determine the decay rate of the sound. Consequently, the natural oscillations of various frequencies that are excited by the same source do not decay simultaneously.

Reverberation has an important effect on the audibility of speech and music in an enclosure because the listener perceives direct sound against a background of oscillations that have been previously excited in the volume of air; the spectra of these oscillations vary in time because of the gradual decay of the natural oscillations. Reverberation is all the more important when oscillations decay slowly. When the dimensions of a room are large compared with the wavelengths, the spectrum of natural oscillations can be regarded as continuous and reverberation can be represented as the result of both a direct sound and a series of delayed repetitions with decreasing amplitudes, which reflect from the boundary surfaces.

Reverberation is also applied to the echoes produced in the ocean by the reflection and scattering of an original sound from the bottom (bottom reverberation), from the agitated surface (surface reverberation), or from a heterogeneous aqueous medium, fish, and other biological objects (volume reverberation).

[ri‚vər·bə′rā·shən]
(acoustics)
The prolongation of sound at a given point after direct reception from the source has ceased, due to such causes as reflections from bounding surfaces, scattering from inhomogeneities in a medium, and vibrations excited by the original sound.
McGraw-Hill Dictionary of Scientific & Technical Terms, 6E, Copyright © 2003 by The McGraw-Hill Companies, Inc.

The persistence of sound in an enclosed space (such as a room or auditorium) after a source of sound has stopped.
McGraw-Hill Dictionary of Architecture and Construction. Copyright © 2003 by McGraw-Hill Companies, Inc.

Feedback
Flashcards & Bookmarks ?
Please log in or register to use Flashcards and Bookmarks. You can also log in with
Flashcards ?
My bookmarks ?
+ Add current page to bookmarks
Mentioned in ?
References in periodicals archive ?
Reverberation time RT is defined as the time for the sound to decay to a level 60 dB below its original level.
EXPERIMENTAL INVESTIGATIONS AND COMPUTER SIMULATIONS TO SOLVE ACOUSTIC PROBLEMS IN THE MODERN CHURCH
Mittra, "Performance evaluation of a mode-stirred reverberation chamber using the finite difference time domain (FDTD) simulation," in Proceedings of the Asia-Pacific Symposium on Electromagnetic Compatibility, pp.
A Fast Finite-Difference Time Domain Simulation Method for the Source-Stirring Reverberation Chamber
According to the distance and acoustic intensity reverberation (DAIR) physical model of sound propagation in closed space, the sound pressure level at r from the sound source can be expressed as follows [17]:
Method for Detecting the Inside of Coke Drum Using Acoustic Signals
Reverberation, as one of the basic physical phenomena in underwater acoustics, the study of it has a long history, and the reverberation theory is becoming mature.
Research and analysis on the reverberation scattering characteristics for active sonar echo detection system
Not only is the reverberation time itself frequency dependent, every signal emitted into the room has its own frequency balance.
From classical music to heavy metal: variable acoustics play a crucial role in modern multi-purpose halls
For this research project, I used a JND value of 5% (51) for T30 when values were larger than 0.6s, and assumed a fixed value of 0.03s for reverberation times shorter than 0.6s.
An acoustical approach to the study of the wagons of the York Mystery Plays: structure and orientation
We work out a method for evaluating the number of independent positions based on the statistical analysis of multiple fluctuating variables, namely multivariate analysis, collected inside the WV of a reverberation chamber.
Reverberation chamber as a multivariate process: FDTD evaluation of correlation matrix and independent positions
Goodness-of-fit (GOF) tests [14] were popularly used in studying the distribution of the random field in a reverberation chamber (RC) [5,6].
Model selection for investigation of the field distribution in a reverberation chamber
"Similar to ATI's horizontally-oriented acoustical reverberation chambers, efficiency of sample installation and testing has been engineered to maximise the testing experience at our facility," stated Eric Miller, director -- acoustics.
ATI's acoustical testing skills expanded
A company spokesman said: "Mugen means limitless and Mugenkyo means limitless reverberation, expressing our belief that taiko has no limitations, no musical or geographical boundaries.
Sounds of drummers head to Wrexham
Writing for engineers, technicians, and beginning students and using a conventional physical approach, they cover the position of the reverberation chambers in common electromagnetic tests, the main physical features of electromagnetic cavities, the statistical behavior or stirred waves in an oversized cavity, the impact of the physical and technological parameters of a reverberation chamber, radiated immunity tests in a reverberation chamber, emissivity texts, measuring the shielding effectiveness, and a mode stirring reverberation chamber as a research tool.
Electromagnetic reverberation chambers
A school's needs vary as widely as its classroom designs - the ability to hear well with minimal reverberation is paramount in a standard classroom, but in a library or media center, the same speech intelligibility could distract students from reading or studying.
A sound education: don't let acoustic problems rule your school