[′rəm ‚līn]
(mapping)
A line on the surface of the earth making the same oblique angle with all meridians. Also known as loxodrome.
McGraw-Hill Dictionary of Scientific & Technical Terms, 6E, Copyright © 2003 by The McGraw-Hill Companies, Inc.
The following article is from The Great Soviet Encyclopedia (1979). It might be outdated or ideologically biased.

a line on a sphere or other surface of rotation that cuts across all meridians at a constant angle K (see Figure 1). The rhumb line and orthodrome (great circle) on a sphere were introduced and studied in 1624 by W. Snell. On a sphere and oblate ellipsoid of rotation where K = 0° and K = 180°, a rhumb line coincides with a meridian; where K = ±90°, it coincides with a geographic parallel. In other cases it has the shape of a spiral: making an infinite number of convolutions on the surface, it comes infinitely close to the poles. On maps using the Mercator projection all rhumb lines are shown by straight lines. 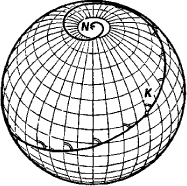 Figure 1. A rhumb line on a sphere, crossing all meridians at an angle K = 70°

The rhumb line is used extensively in maritime and air navigation, where the angle K is treated as the true course of the ship or aircraft. The use of a rhumb line instead of a great circle, which is the shortest distance between two points on a sphere, is determined by practical convenience in controlling a ship or aircraft, even though the route is longer in this case. Where K≡ 0° (or 180°) the difference in lengths of a rhumb line and a great circle that connect two given points is proportional to the distance between the points and the distance from the equator. Rhumb lines are sometimes used in spheroidal geodesy. The isogonal trajectories of a given family of curves on random surfaces are a very generalized form of the rhumb line.

A rhumb line crosses all meridians at the same angle.
A line on the surface of the earth that cuts all meridians at the same angle. It appears as a curved line on the surface of a sphere. Only one such line may be drawn through any two points. Although this is not the shortest distance, the direction is constant. Normally, flights of less than 1,000 NM distance follow the rhumb-line track, whereas flights of a longer distance follow the great-circle track. Also called an equiangular spiral, loxodrome, loxodromic curve, or Mercator track.
An Illustrated Dictionary of Aviation Copyright © 2005 by The McGraw-Hill Companies, Inc. All rights reserved

Feedback
Flashcards & Bookmarks ?
Please log in or register to use Flashcards and Bookmarks. You can also log in with
Flashcards ?
My bookmarks ?
+ Add current page to bookmarks
Mentioned in ?
References in periodicals archive ?
The neat precision of the rhumb lines has been replaced by raw, irregular, uneven pen-strokes that produce deranged faces interlaced with the land masses.
Medieval madness: Opicinus de Canistris and Geschwind Syndrome
- Information adapted from Chief of Navy Information Rhumb Lines, Sept.
Social media guidelines
Navy Dept., "Task Force Climate Change and the Arctic Roadmap," Rhumb Lines, 30 November 2009.
Arctic security considerations and the U.S. Navy's roadmap for the Arctic
The night before the nuptials, the bridal couple hosted a party for about 35 people at St John's Rhumb Lines Restaurant in quaint downtown Cruz Bay.
My Renee had me from hello; Kenny Chesney talks for the first time about his love for the Bridget Jones star
The newlyweds and 45 guests had also held a party at the Rhumb Lines restaurant the night before.
RENEE ZELLWEDDER; Star ties knot with country singer Kenny
Mark Monmonier's Rhumb Lines and Map Wars: A Social History of the Mercetor Projection (University of Chicago Press 17.50 [pounds sterling]) offers an account of the controversies surrounding Flemish cartographer Gerard Mercator's legacy.
Sixteenth to eighteenth centuries
The compass roses, rhumb lines, decorative scale bars, and the map's general appearance also point to a Portuguese origin.
Jean Mallard's world map (ca.1538-39)
ADMIRAL GARY ROUGHEAD, IN RHUMB LINES, 20 AUGUST 2007
Maritime domain awareness: myths and realities