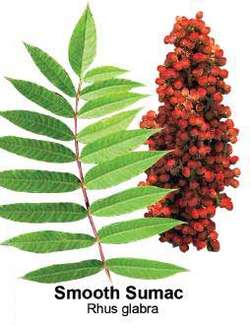 Feedback
Flashcards & Bookmarks ?
Please log in or register to use Flashcards and Bookmarks. You can also log in with
Flashcards ?
My bookmarks ?
+ Add current page to bookmarks
References in periodicals archive ?
Rhus glabra leaves collected from the contaminated site near Picher displayed a mean ([+ or -] SE) unsigned fluctuating asymmetry value of 0.0455 cm ([+ or -] 0.0020 cm), compared with a mean of 0.0335 cm ([+ or -] 0.0015 cm) for leaves collected from Tulsa (n = 80 leaves for each site).
Heavy metal contamination increases fluctuating asymmetry in Rhus Glabra L. (Anacardiaceae)
The same procedure was used for Rhus glabra, with the following modifications.
- A second method was used to estimate size of the soil seed bank of Rhus glabra using four additional soil samples (20 cm x 20 cm x 5 cm deep) collected as described above from each of the three clumps of this species.
For Rhus glabra, 24 seed traps (30 x 32 cm) made with the same wire netting mentioned above were set up under standing plants on 20 August 1994.
After one calendar year only 2 [+ or -] 1% of the Rhus glabra seeds in the unheated greenhouse had germinated [ILLUSTRATION FOR FIGURE 2B OMITTED].
- After 4 y in the unheated greenhouse, 900 [+ or -] 282 seedlings of Rhus glabra [m.sup.-2] had emerged.
Input to the soil seed bank in Rhus glabra was much greater than that in R.
That many more viable seeds of Rhus glabra remained impermeable (4525 [m.sup.-2]) than had germinated (900 [m.sup.-2]) after 4 y in greenhouse soil (Table 2) agrees with conclusions by other researchers that size of soil seed bank based on the direct seed-counting method greatly exceeds that determined via the seedling-counting approach (Olmsted and Curtis, 1947; Hurka and Haase, 1982; Gross, 1990; Brown, 1992).
Contrasting Soil Seed-bank Dynamics in Relation to Local Recruitment Modes in Two Clonal Shrubs, Rhus aromatica Ait. and R. glabra L. (Anacardiaceae)
For example, smooth sumac (Rhus glabra), previously reported to be a major component in the diet of golden mice (Goodpaster and Hoffmeister, 1954; Linzey, 1968; Linzey and Packard, 1977), was of low food quality because of high levels of gallotannins when dietary experiments were conducted (Jewell et al., 1991).
Bioenergetics of golden mice: the importance of food quality
Encyclopedia browser ?
Full browser ?
CITE
Site: Follow: Share:
Open / Close