A vault in which the ribs support, or seem to support, the web of the vault. 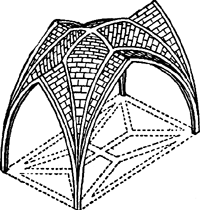 ribbed vault
A vault in which the ribs support, or seem to support, the web of the vault.
McGraw-Hill Dictionary of Architecture and Construction. Copyright © 2003 by McGraw-Hill Companies, Inc.

Feedback
Flashcards & Bookmarks ?
Please log in or register to use Flashcards and Bookmarks. You can also log in with
Flashcards ?
My bookmarks ?
+ Add current page to bookmarks
Mentioned in ?
References in periodicals archive ?
The pointed arch and ribbed vault gave a new lightness and permitted more refinement and subtlety of form.
The social history of the English medieval cathedral
She is a member of the Latvian Union of Artists--which occupies a 19th century Gothic-revival mansion known as Zvartava Castle--and based the bat wings on the distinctive concave geometry of Gothic ribbed vaults. Something of a medieval flavour lingers in her use of the forms in Batgirl, despite her free interpretation of the ribs and spans of the vaults and the rather classical volutes in which the metacarpals of the wings terminate.
Ilona Romule's porcelain fables
Following the introduction, the students examined the differences between barrel and ribbed vaults, an the differences between Romanesque and Gothic architecture by looking a several examples as well as a film strip
An introduction to architecture & installation art
The palace area consists of a sequence of courts leading into each other, and its much ruined buildings reveal the routine use of domes, pointed arches, pyramidal vaults, ribbed vaults, and squinch zones.
Firuzabad: Palace City of the Deccan
However, Islamic sources and the Iberian Peninsula's own heritage of Moorish and Gothic monuments (notably the exceptional late Gothic and Manueline ribbed vaults and cloisters of the monastery of Batalha or the Jeronimos in Lisbon) have furnished Rewal with equally significant and appropriate design precedents.
Islam in Iberia