[′räk·ət ‚en·jən]
(aerospace engineering)
A reaction engine that contains within itself, or carries along with itself, all the substances necessary for its operation or for the consumption or combustion of its fuel, not requiring intake of any outside substance and hence capable of operation in outer space. Also known as rocket motor.
McGraw-Hill Dictionary of Scientific & Technical Terms, 6E, Copyright © 2003 by The McGraw-Hill Companies, Inc.
The following article is from The Great Soviet Encyclopedia (1979). It might be outdated or ideologically biased.

There are many types of chemical rocket engines, and they are classified on the basis of the propellant components used (oxidizer and fuel), the state of aggregation of the components,

the magnitude of jet thrust developed, and the design and function of the engine. In practice, however, the principal designs and operating processes of different types of chemical rocket engines are similar. All rockets have a main assembly consisting of a combustion chamber and nozzle (Figure 1,a). The fuel is oxidized and the reaction products—the heated gases—are released inside the combustion chamber. The gases are expelled in the nozzle as a result of expansion and exit at high speed, forming a reactive jet, that is, creating the jet thrust of the engine.

Solid-propellant rocket engines are the forerunners of all rocket engines and are used for launching signal flares, fireworks, and military rockets; they are also used in space exploration. Their advantages are operational reliability and simplicity and constant readiness for launching over prolonged storage. Disadvantages include lower efficiency relative to the best liquid-propellant engines, difficulty in controlling the magnitude and direction of the reactive thrust, and, as a rule, the limitation of use to a single firing. Of all chemical rocket engines, solid-propellant engines develop the maximum thrust, and their specific impulse may reach 2.5–3 kilonewtons-sec/kg. 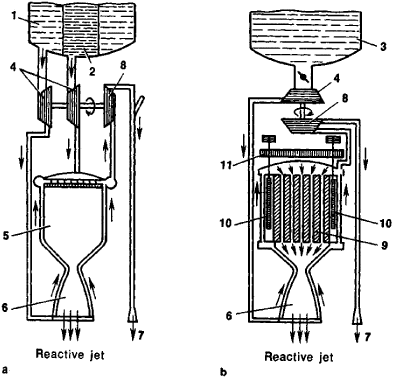 An increase in the specific impulse by a factor of tens and hundreds can be achieved using electric rocket engines, in which electric energy is converted into the kinetic energy of a reactive jet.

In theory, photon (quantum) rocket engines, in which the reactive jet is formed by quanta of radiation, have the most potential. A possible area for the use of photon rocket engines is interstellar flight, but no workable way to construct such rocket engines has yet been found (1975).

Depending on their use in rocket and space technology, rocket engines may be classified as propulsion engines (the principal engines in a rocket used, for example, to accelerate the rocket to escape velocities), attitude and control engines, retrofire engines, vernier engines, steering engines, and stabilizer engines. Rocket engines are used in aviation as main and auxiliary (starter and assist) engines.

Feedback
Flashcards & Bookmarks ?
Please log in or register to use Flashcards and Bookmarks. You can also log in with
Flashcards ?
My bookmarks ?
+ Add current page to bookmarks
Mentioned in ?
References in periodicals archive ?
The rocket engine explosion occurred at a weapons testing area near the village of Nyonoksa in Arkhangelsk region, the Interfax news agency cited unnamed security sources as saying.
Radiation briefly spikes in Russian city after rocket engine explosion -- TASS
A rocket engine, much like an aircraft jet engine, burns fuel together with an oxidizer--often oxygen--to create hot gas that expands down and out of the engine nozzle, accelerating the engine the other way.
THE ENGINE THAT CAME IN FROM THE COLD: CAN SPACEX AND BLUE ORIGIN BEST A DECADES-OLD RUSSIAN ROCKET ENGINE DESIGN?
Up until that point, the team had been developing its own rocket engine with a firm in Manchester called Falcon Project.
Space race
Such projects, currently being supervised by Dr Bilal of DSU, include Long Endurance Unmanned Aerial Vehicle (UAV), UAV Catapult Launch System, Turbojet Engine, Hybrid Rocket Engine and Regeneratively Cooled Liquid Rocket Engine.
DHA Suffa University wins SUPARCO's Space Fair 2016
The Raptor is a cryogenic methane-fueled rocket engine, which is said to have several times the thrust of Merlin, the engine used in SpaceX's Falcon 9 rockets.
SpaceX on course for Mars mission, set to test Raptor rocket engine
"You can do analysis, material testing, and an individual component test, but it's very hard to replicate the true environment of a hot fire rocket engine test."
Building a 3D printed rocket engine
Congress banned use of the Russian RD-180 rocket engines for military use after 2019, following Russia's annexation of the Crimea region of Ukraine in 2014.
Pentagon: U.S. needs up to 18 more Russian rocket engines
NASA successfully tested the first deep space RS-25 rocket engine for 500 seconds March 10, clearing a major milestone toward the next great era of space exploration.
Engine Test Marks Major Milestone on NASA's journey to Mars
officials back to Russia to look for a rocket engine that can get military equipment into space, Senate Armed Services Committee Chairman John McCain said on Monday, according to Reuters.
McCain: US should spurn Russia rocket engines despite SpaceX failure
He was recognized for outstanding support to the center during 27 years of work with the space shuttle main engine, J-2X, RS-68 and RS-25 rocket engine test projects.
Stennis employees receive Silver Snoopy Awards
and Boeing Co., picked Blue Origin to develop a rocket engine that could replace the Russian rocket engine used in many American unmanned launches.
Tech execs run commercial space race