a swivelling device attached to the gunwale of a boat that holds an oar in place and acts as a fulcrum during rowing
Collins Discovery Encyclopedia, 1st edition © HarperCollins Publishers 2005

[′rō‚läk]
(naval architecture)
A U-shaped fitting with shank or socket attachment to the gunwale of a boat, through which an oar is swung.
McGraw-Hill Dictionary of Scientific & Technical Terms, 6E, Copyright © 2003 by The McGraw-Hill Companies, Inc. 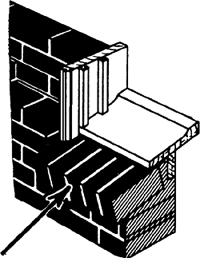 rowlock
1. A brick laid on its edge so that its end is visible.
2. One ring of a rowlock arch.
McGraw-Hill Dictionary of Architecture and Construction. Copyright © 2003 by McGraw-Hill Companies, Inc.

Feedback
Flashcards & Bookmarks ?
Please log in or register to use Flashcards and Bookmarks. You can also log in with
Flashcards ?
My bookmarks ?
+ Add current page to bookmarks
Mentioned in ?
References in periodicals archive ?
We had to devise a strategy to capture this rowlock. I gently closed the doors to the house and shut the windows.
The Silenced Cock
The dominant rowlock would walk around and forced the hens to the ground, get on top of their backs and tread them.
The silenced cock
All have a high freeboard for safety, and each seat is a separate mould and hand laid, all have rubber gunwales, rowlocks and tow ring.
Tender mercies
They include a lifejacket worn by a Titanic survivor and two thole pins (rowlocks) from lifeboat No 9, all obtained by 19-year-old Carpathia crew member Ernest St Clair of Liverpool.
Rescue relived; Maritime Tales by Stephen Guy of Merseyside Maritime Museum
For all Dan knows, he might be allergic to rowlocks and people on towpaths with megaphones.
Dan gets 2012 trial
Well, rowlocks to that, as far as I am concerned...
willy poole
ANSWERS: 1 USS Enterprise; 2 Governor of the Bahamas; 3 Red; 4 Bhopal; 5 A soup flavoured with curry, 6 Four Weddings And A Funeral; 7 Italy; 8 Virginia; 9 A unit of astronomical distance (about 3.26 light years); 10 Rowlocks.
Quiz of the Day
With money left over, the RNLI decided to commission a model of the Robert and Susan accurate in every detail down to its oars and rowlocks.
Lost lifeboat sails back into limelight
He showed me where the oars were stored and the brass rowlocks that fitted onto the boat so that the oars could be moved about in the water.
MORNINGSERIAL
When it comes to grabbing an oar in the promotion of the Good Ship Lambourn, few, if any, beat Henderson to the rowlocks. But this was generosity beyond the call of duty.
Henderson has no peers at throwing a good party; Lambourn correspondent Rodney Masters joins the team at Seven Barrows to celebrate a season of outstanding achievement
The scale model of the lifeboat, named Robert and Susan, is complete in every detail, down to oars and rowlocks. It is being donated by its current owner, semi-retired banking consultant Peter Allsopp, to Newbiggin RNLI to become part of a planned maritime heritage centre.
Gem of Victorian craft
"I won't be talking new balls or rowlocks," she says - double entendres are her favourite kind of humour.
Men always try to cage and stifle me. Nick's different .. he's not jealous of me; EXCLUSIVE: SUPERBIKE SUZI ON A BITTER DIVORCE ..AND FREEDOM