1. any of the characters of an ancient Germanic alphabet, derived from the Roman alphabet, in use, esp in Scandinavia, from the 3rd century ad to the end of the Middle Ages. Each character was believed to have a magical significance
2. any obscure piece of writing using mysterious symbols
3. a kind of Finnish poem or a stanza in such a poem
Collins Discovery Encyclopedia, 1st edition © HarperCollins Publishers 2005
The following article is from The Great Soviet Encyclopedia (1979). It might be outdated or ideologically biased.

a character of the oldest Germanic alphabet, a writing system used from the second century to the late Middle Ages. Runes, which were cut on or carved into stone, metal, wood, or bone, were used in Scandinavia, Iceland, Greenland, England, northern Europe, northern Prichernomor’e, Staraia Ladoga, and Novgorod. An inscription on a spearhead found in Øvre Stabu, Norway, dating to approximately A.D. 200, is the oldest runic inscription known.

The composition of the alphabet and the shape of the runes changed in the course of time. Two varieties of runic writing are distinguished: an early runic alphabet, called futhark, and a later runic alphabet, or Danish runes (see Figure 1). The former contained 24 runes, and the latter consisted of 16. The later runic alphabet, a consistent simplification and modification of futhark, gradually replaced futhark and became firmly established in Scandinavia in approximately the late eighth century. Other types of runic alphabets were functionally or geographically limited: truncated runes (in German, Stutzrunen), widely used in Sweden and Norway during the late Middle Ages and sometimes called Swedish-Norwegian runes; pointed runes, which originated no earlier than the 12th or 13th centuries; and Anglo-Saxon runes, which constituted an alphabet of 33 characters. The letters could be read from left to right, from right to left, or in boustrophedon fashion. Word boundaries were only rarely marked; dots or points were used.

The origin of the runes has not been explained definitively. According to the Norwegian runologist C. Marstander, the runes are a modification of one of the northern Italian alphabets. Runic inscriptions (futhark) most often consist of one or several words, such as a proper name, a dedication, or a magical incantation of the type found on the bracteate (a round gold pendant) from Darum. Inscriptions of several lines are rare. Inscriptions written in the later alphabet usually consist of several short lines. 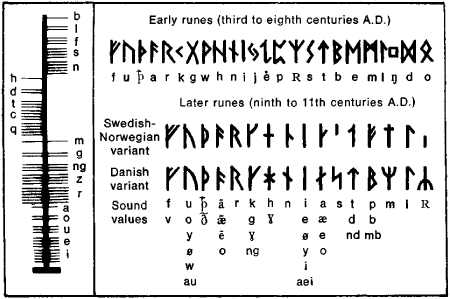 Runic inscriptions are characterized by stereotyped formulas, sacral and poetic lexical elements, magical incantations, and a generally elevated tone. The language of the early runic inscriptions can be regarded as a distinctive literary koine, the first supradialectal and literary language in the history of the Germanic languages.

an epic folk song of the Karelians, Finns, and Estonians. Runes were used by E. Lönnrot in the Kalevala.

Runes originated in antiquity and reflected certain aspects of the material and spiritual culture of the primitive communal system and vestiges of matriarchal and patriarchal relations. Genetically, they can be traced back to archaic cosmogonic myths. The songs are mainly about the epic heroes Väinämöinen and Ilmarinen. Their poetic structure is characterized by parallelism of verses, anaphoras, lexical repetition, conventional epithets, and similarity of plot conflicts. Early examples of runes have a range of a fifth or a fourth, consist of two periodically recurring diatonic motifs, and are mainly in 3/4 and 5/4 meter. Verse structure is determined by syllabic structure.

Runes were usually sung by a single performer or alternately by two singers; sometimes the singing was accompanied by playing on the kantele, a plucked stringed instrument. The Kalevala and Kalevipoeg epics were compiled from runes. Well-known rune singers included the Perttunens, a family of Karelian folktale narrators, and J. Kainulainen and Paraske Larin, both of whom were Finns.

Feedback
Flashcards & Bookmarks ?
Please log in or register to use Flashcards and Bookmarks. You can also log in with
Flashcards ?
My bookmarks ?
+ Add current page to bookmarks
Mentioned in ?
References in periodicals archive ?
Rune Eriksen is a retired electrician who has spent the past 20 years building his dream lakeshore cabin, garage and shop.
Roof under a deck: inexpensive roof panels keep it dry down below
"But the fewer rune stones there were in the vicinity, the poorer writers the carvers of these non-verbal inscriptions were.
11th century rune stones say more than what was written on them
"Professor Jacobs, hi." Rune stood in the doorway, her fists balled in her jacket pockets.
Bandit
Officials from the Guinness Book of Records were on hand to authenticate Rune's feat.
Man scoffs 187 oysters in Co Down record bash
the Rune is the longest bike Honda makes, even though it only seats one.
Honda Rune: intensity rules. (WIP)
Like letters in the English alphabet, each rune corresponds to a sound or sound combination.
Unpeaceful symbol: a look at the history of the so-called peace symbol reveals that it originated in ancient pagan rituals, and that its use has been primarily as a token not of peace, but of evil. (Peace Symbol)
With a Tolkienesque structure of maps and ancient runes, it takes the reader on a breathtaking odyssey through the nine worlds.
Harris, Joanne: Runelight
Laura Munslow Kim Olander, Sandvik; Elizabeth Rhodes, Cobetts; Martin Williams, EBS; Tony Hall, Handelsbanken Left: Jeffrey Skidmore, artistic director, Ex Cathedra; Charles Bond, Swedish Honorary Consul for the Midlands; Alan Bolton, MD, Sandvik Right: Nuz Chagan, the Reverend Anders Rune, the Reverend Canon Janet Chapman
Santa Lucia celebration
The flimsy background story isn't deep, complex or sprinkled with heavy dialogue choices, but Rune Factory Frontier's mishmash of gameplay styles is so well delivered, the whimsical tale really doesn't matter.
IT'S TOP OF THE CROPS; Fun down on the farm..with a bit of combat thrown in
NORDIC BUSINESS REPORT-30 November 2009-Norwegian Eltek names Rune Finne CEO(C)1994-2009 M2 COMMUNICATIONS http://www.m2.com
Norwegian Eltek names Rune Finne CEO
This was stated by the country director ADB Rune Stroem while speaking at the 5th POGEE conference at Karachi Expo Centre here Tuesday.
ADB provides $ 5.3 bln, including $ 2.166 bln for energy sector