sage, any species of the large genus Salvia, aromatic herbs or shrubs of the family Labiatae (mint family). The common sage of herb gardens is S. officinalis, a strongly scented shrubby perennial, native from S Europe to Asia Minor. The dried leaves are used as seasoning, especially in dressings for meat and poultry and also in sage cheese; sage tea, once popular as a beverage, has also been used as a domestic remedy for colds and other ailments and as a hair rinse. The oil is used in medicinals and flavorings and sometimes in perfumery. Prized since ancient times, common sage was thought to prolong life and to increase wisdom by strengthening the memory—whence the name.

The ornamental sages are often popularly called salvia. Of these the scarlet sage (S. splendens), native to Brazil, is best known. Clary (S. sclarea), native from the Mediterranean region to Iran, is a biennial sage whose seeds were once used to “clear the eye”; it has bluish or pinkish flowers, and its oil is sometimes used similarly to that of the common sage. 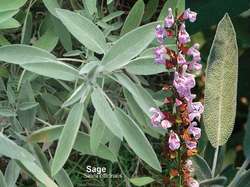 Feedback
Flashcards & Bookmarks ?
Please log in or register to use Flashcards and Bookmarks. You can also log in with
Flashcards ?
My bookmarks ?
+ Add current page to bookmarks
Mentioned in ?
References in periodicals archive ?
Sage Central, Sage's patient support center, officially opened in June and is providing a range of patient resources to assist women with PPD and their families, including: dedicated case managers who can provide information to help navigate the treatment journey; personalized support to assist with understanding insurance and coverage options; financial assistance programs for eligible patients and access to educational resources and assistance through connections to more than 60 national and local advocacy groups.
Sage Therapeutics Announces Second Quarter 2019 Financial Results and Highlights Pipeline and Business Progress
"The UK's tech sector is fast becoming a centre of global excellence, and Sage is particularly proud to be part of this, and to have such a significant home in the North East.
Sage (LSE: SGE) - Sage announces [pounds sterling]40m investment in major new hub for colleagues in the North East -- 1/7/2019
He will also be tasked with leading innovation across Sage Business Cloud, using emerging technologies such as artificial intelligence to improve Sage's products.
Trio of appointments as Sage reshapes top team
Sage also used his "top-notch skills" to aid in seizures of more than of $650,000 and 11 vehicles, as well as removing more than $8 million worth of dangerous drugs off the streets of McHenry County, according to the news release, which credited Sage with tracking down 43 subjects and finding at least seven cadavers.
McHenry sheriff's office mourns police dog Sage
The business solutions provider will also be hosting Sage Sessions at its stand about digital transformation and best practices across verticals and will be exhibiting in Hall 7 Stand D7-34.
Sage Announces Participation in GITEX Technology Week 2018
Launched in June 2013, Sage Enterprise Intelligence is the Business Intelligence solution for Sage enterprise products.
Sage Enterprise Intelligence wins 1,000 customers
Bensch joins Sage from HPE (Hewlett-Packard Enterprise), where he was managing director for South Africa.
Sage appoints new EVP for Africa and Middle East
Sage Alexander and the Hall of Nightmares is an intricate, adventurous novel of a boy's journey to save his father and defeat the Seven Princes of Hell.
Sage Alexander and the Hall of Nightmares
The new Sage Summit Tour will follow the model of previous Sage Summits, with bespoke content for partners and accountants on day one, and market leading product and technology sessions for the world's business builders on day two.
Sage takes the magic from Sage Summit on the road to meet with the world's business builders
The review for upgrade is based upon Moody's view that, should the acquisition by Stryker Corporation be consummated, that Sage will become part of an enterprise with a stronger overall credit profile than if Sage remains a standalone entity.
Moody's reviews Sage Products Holdings III, LLC ratings for upgrade
Sage, a maker of accounting, payroll and payments solutions,
Sage launches new ISV marketplace