sarcophagus (särkŏfˈəgəs) [Gr.,=flesh-eater], name given by the Greeks to a special marble found in Asia Minor, near the territory of ancient Troy, and used in caskets. It was believed to have the property of destroying the entire body, except for the teeth, within a few weeks. The term later generally designated any elaborate burial casket not sunk underground. The oldest known examples are from Egypt; they are box-shaped with a separate lid, which sometimes has sculptured effigies of the corpses. The sarcophagus of Tutankhamen (14th cent. B.C.), which was rediscovered in 1922, is of red granite and ornamented with reliefs of spirits with outspread wings. Later Egyptian sarcophagi were sometimes shaped to the body they contained. Sarcophagi were not in common use in Greece earlier than the 6th cent. B.C. because of the previous custom of cremation. After that time they became numerous. Records reveal that the majority of sarcophagi were made of wood, but those that remain are of stone and terra-cotta, as evidenced in the early 6th-century examples (British Mus.) from Clazomenae. Many Greek and Etruscan sarcophagi are in the shape of a couch; others, such as the sarcophagus of Alexander the Great, are carved and painted in imitation of temple architecture. The marble sarcophagi (excavated in 1877) from Sidon, a chief city of ancient Phoenicia, are among the finest examples of Greek art. In Rome sarcophagi became popular before the Punic Wars. The earliest known example is that of the consul Cneius Cornelius Scipio of the 3d cent. B.C., now in the Vatican. Under the rule of the emperors Roman sarcophagi became elaborate, with mythological scenes carved on the sides and statues of the deceased on the lid. The early Christians also used sarcophagi for their distinguished dead. The carvings, usually representing Bible stories, are the chief source of early Christian sculpture. In the Middle Ages sarcophagi proper were used only in rare instances for especially elaborate entombments. Although memorials in the shape and decoration of sarcophagi were erected during the Renaissance and later, the body itself was almost always buried underground.

An elaborate coffin for an important person, of terra-cotta, wood, stone, metal, or other material, decorated with painting and carving and large enough to contain only the body. If larger, it becomes a tomb.
Illustrated Dictionary of Architecture Copyright © 2012, 2002, 1998 by The McGraw-Hill Companies, Inc. All rights reserved
The following article is from The Great Soviet Encyclopedia (1979). It might be outdated or ideologically biased.

in ancient times, a coffin or tomb; generally, any coffin whose design is based on architectural and artistic principles. The sarcophagi of ancient Egypt consisted of many parts. Originally resembling dwellings, they became mummylike in appearance after the third millennium B.C. Etruscan sarcophagi had a figure of the deceased on the lid, and Hellenic, ancient Roman, and early medieval sarcophagi were decorated with reliefs and architectural details. A type of classical sarcophagus developed during the Renaissance and the baroque period. 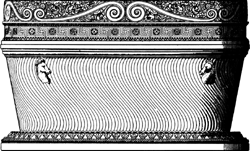 sarcophagus of Roman Imperial time
An elaborate coffin for an important personage, of terra-cotta, wood, stone, metal, or other material, decorated with painting, carving, etc., and large enough to contain only the body. If larger, it becomes a tomb.
McGraw-Hill Dictionary of Architecture and Construction. Copyright © 2003 by McGraw-Hill Companies, Inc.

Feedback
Flashcards & Bookmarks ?
Please log in or register to use Flashcards and Bookmarks. You can also log in with
Flashcards ?
My bookmarks ?
+ Add current page to bookmarks
Mentioned in ?
References in periodicals archive ?
However, mud and water have filled the sarcophagus over the centuries and it will be some time before the contents can be properly analysed.
Roman tomb prised open by experts; LID LIFTED BY BOFFINS FOR FIRST TIME IN 2,000 YEARS
The surfaces of both the strigilated sarcophagus and the vase are animated by a pattern of shallow vertical channels that undulate in elongated S- or reversed S-shaped curves, taking their modern name from their resemblance to the curved and hollowed blade of an ancient strigil--the athletic instrument used by Greeks and Romans to scrape oil and dirt from the body.
The Metropolitan Museum of Art two Roman sculptures
Pope John XXIII had been in a sarcophagus, but John Paul was buried only with a simple stone slab covering his coffin.
No marble sarcophagus, just a simple casket
Western governments and Ukraine have pledged pounds 500m to replace the existing sarcophagus,but only pounds 81m has been spent due to delays.
Chernobyl shelter `could collapse'
The Artisan Group was assigned the task of designing, constructing, and decorating an appropriate sarcophagus to house the completed mummy.
King Cluck: an interdisciplinary undertaking
It took 206 days to build the first sarcophagus, using 400,000 cubic metres of concrete and 7,300 tonnes of metal framework.
How Chernobyl was finally made safe - 30 years after world's worst nuclear disaster; The plan to encase the entire disaster site where radiation was 20 times more than the lethal dose was so ambitious that many thought it could never be done
The Rome segment of our pilgrimage included a visit to the Pio Cristiano Museum, one of the Vatican Museums, which contains many sarcophagus friezes of deceased women in shown in authoritative postures.
Foremothers minister from beyond the grave: Funerary art depicts early-Christian women proclaiming Jesus with authority
Scott C Waring,&nbsp;a famous UFO researcher, claims that a NASA rover photo has revealed an ancient sarcophagus on the red planet.
NASA's Rover Stumbles Upon Alien Life, UFO Expert Claims
In 1927, a huge limestone sarcophagus was found in the area and placed in the Egyptian Museum in Cairo, but the site was then forgotten, Hawass said.
Egypt unveils 2,500-year-old mummy at forgotten cemetery
The Ministry of Antiquities announced discovering a limestone sarcophagus containing two mummies in Quweisna quarries in Menoufiya.
Two mummies accidentally discovered in Menoufiya
The sarcophagus was one of two found earlier this month by a French-led mission in the northern area of El-Asasef necropolis on the western bank of the Nile.
Mummy of 3,000-year-old woman discovered inside unopened coffin in Egypt