1. the dried crusty surface of a healing skin wound or sore
2. a contagious disease of sheep, a form of mange, caused by a mite (Psoroptes communis)
Collins Discovery Encyclopedia, 1st edition © HarperCollins Publishers 2005

Short piece of lumber nailed over a splice or joint to add strength or prevent slippage or movement.
Illustrated Dictionary of Architecture Copyright © 2012, 2002, 1998 by The McGraw-Hill Companies, Inc. All rights reserved
The following article is from The Great Soviet Encyclopedia (1979). It might be outdated or ideologically biased.

in agricultural plants, a dangerous disease caused mainly by microscopic pathogenic fungi and, sometimes, by actinomycetes and bacteria. Scab affects the superficial tissues of the leaves, fruits, flowers, shoots, tubers, and roots. It is characterized by scaling of the cuticle or skin and by the formation of spots, pits, pustules, or warts. Many agricultural plants are affected. Most serious are apple scab, pear scab, potato scab, and citrus scab. Less damaging are sugarbeet scab and cherry scab.

Apple and pear scabs. Apple and pear scabs are widespread throughout the world. Apple scab is caused by the ascomycete Venturia inaequalis (conidial stage of Fusicladium dendriticum). The causative agent of pear scab is V. pirina (conidial stage of F. pirinum). Both diseases are characterized by the formation of a brownish olive, olive-green, gray-black, or almost black velvety bloom on the leaves, fruits, and flowers. Small, round, bubblelike swellings form on the cortex of shoots, the skin cracks, and tiny pits appear. Affected leaves and flowers fall prematurely, and the fruits dry out, grow unevenly, and often crack. The bloom, which covers the spots and lines the pits and cracks, is the conidial spore carrier of the fungus, by means of which numerous repeated infections occur through the summer. Primary infection in the spring is caused by conidia or by ascospores that develop in special receptacles, or perithecia, on overwintering diseased leaves. The disease is especially destructive in years with much precipitation. Trees that are severely affected with scab are less frost resistant and produce a smaller yield of lesser quality. Methods of control include the use of the most scab-resistant varieties (among apples—the Saffron Pippin, English Winter Gold Pearmain, and Wagener; among pears, Beurré Ligel, Beurré Clairgean, Beurré Bosc, and Cure); destruction of fallen foliage and affected shoots; and repeated spraying of trees with fungicides during the growth period.

Potato scab. The causative agents of common potato scab are various species of actinomycetes, including Actinomyces scabies, A. tricolor, and A. cretaceus. Common potato scab is particularly destructive to potatoes growing on light, sandy soils or on soil with a high limestone content. Small star-shaped scabs appear on the surface of the affected tuber. At harvest, the tubers may be covered with a deposit of thin mycelial filaments, which later break up into small bacillus-shaped spores—the sources of infection. Large quantities of manure and excessive moisture aggravate the disease. The most resistant potato varieties are the Berlichingen, Kameraz, Detskosel’skii, and Priekul’skii.

Powdery scab of potatoes is caused by the fungus Spongospora subterranea, which is distributed principally on heavy clayey or clayey-loam soils. The fungus is widespread on peat soils in the northwestern USSR. The tubers in the soil become covered with warts, which dry very quickly upon exposure to air. The skin of the nodule bursts, and an open star-shaped pustule is formed, which is filled with a powdery mass—the spores of the causative agent. Somewhat resistant varieties are Parnassiia, Iubel’, Majestic, Lorkh, and Cardinal.

Silver scab, or silver scurf, affects potatoes in northwestern regions and in the Far East. The causative agent is the imperfect fungus Spondylocladium atrovirens. The tubers are marked by silvery patches. During harvest the spots are only slightly noticeable, but by the end of the storage period (closer to spring), the spots deepen, acquire a characteristic silvery sheen, and are covered with a dark deposit of the conidial spore carrier. No potato varieties are resistant to the disease.

Another scab, caused by the imperfect fungus Oospora pustulans, affects potatoes in northwestern regions and in the Far East. No varieties are resistant to the disease.

Black scab, or Rhizoctonia disease, is most common in northern and middle parts of the USSR. It is caused by the fungus Rhizoctonia solani. There are no resistant potato varieties.

Potato scabs lower the commercial value of the tubers, increase waste from food potatoes, and shorten the storage life. Control measures include crop rotation, the use of resistant and slightly susceptible varieties, and the planting of undiseased or disinfected tubers.

Citrus scab. Citrus scab, which affects lemons and oranges, is caused by the imperfect fungus Sphaceloma fawcetti. Small, rounded, predominantly yellow spots appear on the leaves and fruits. The spots later form small warts or scabs. The fruits develop poorly and are deformed; when the ovaries are affected, the fruits fall off the tree. Diseased shoots are retarded in growth. The fungus spreads by means of conidia. Control measures include the removal and burning of affected parts of the plant before the vegetative period and spraying with fungicides.

Sugarbeet and cherry scabs. Sugarbeet scab is caused by actinomycetes (Actinomyces scabies, A. cretaceus, A. albus) and bacteria (Bacterium scabiegenum). It is characterized by the formation of warts on the roots. Cherry scab is caused by the fungus Karaculinia cerasi. With early infection, the fruits wrinkle and dry out.

[skab]
(building construction)
A short, flat piece of lumber that is used to splice two pieces of wood set at right angles to each other.
(medicine)
Crusty exudate covering a wound or ulcer during the healing process.
(metallurgy)
A defect consisting of a flat, partially detached piece of metal joined to the surface of a casting or piece of rolled metal.
McGraw-Hill Dictionary of Scientific & Technical Terms, 6E, Copyright © 2003 by The McGraw-Hill Companies, Inc. 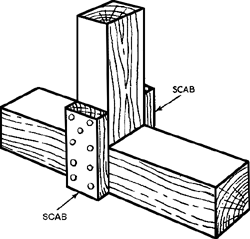 scab
A short flat piece of lumber which is bolted, nailed, or screwed to two butting pieces in order to splice them together.
McGraw-Hill Dictionary of Architecture and Construction. Copyright © 2003 by McGraw-Hill Companies, Inc.

Feedback
Flashcards & Bookmarks ?
Please log in or register to use Flashcards and Bookmarks. You can also log in with
Flashcards ?
My bookmarks ?
+ Add current page to bookmarks
Mentioned in ?
References in periodicals archive ?
(25) The intimidation of the scabs was not always so easy.
Fremantle in slow motion: winning back the Melbourne Waterfront, 1919
He suffered constant abuse from fans at away grounds who would shout scab after he defied pickets to work at the Monktonhall Colliery in Midlothian.
Legacy of fear still haunts strikebreakers; THE MINERS' STRIKE 25 YEARS ON..THE 'SCABS'
Narrator A: The newsies begin to walk down the street but stop when they see Dave Simons leading a group of scabs to sell papers.
Extra! Extra! The '1899 newsboys' strike called attention to the struggles of kids working the U.S
To try to prevent infection to the rest of your family, I suggest that you cut your daughter's nails short and encourage her not to scratch her scabs, pick her nose, bite her nails or suck her fingers.
Is skin disease a real danger? Ask the Doc
ScAbs allow an easier and more cost-effective scale-up for manufacturing compared with monoclonal antibodies.
Development of an ELISA for the determination of the major haptoglobin phenotype: an interesting technical development and its potential consequences
"These scabs will potentially be the oldest material we'll have looked at in terms of being able to determine any kind of genomic characterization," says Damon.
Century-old smallpox scabs discovered
Sometimes the buckle will open up, allowing the metal to run through the crack in the sand and fill the void behind the buckle to create a scab (Fig.
It's Time to Play, Name ... That ... Green Sand Casting Defect!
I heeded my mother's advice and let the scabs take their course, and eventually (but it seemed forever!) my knees became scabless and presentable.
Healing takes time: "yecch, don't pick those scabs!"
Such actions may not be common but they do happen and they are usually directed at what trade unionists call "scabs." These are people who, for one reason or another, choose to cross picket lines when their fellow workers are on strike.
Scab - a definition
All this damage is caused by the fungus Fusarium graminearum, which got nicknamed "head scab" because of the blisters or scabs it forms on the grain-bearing structure, or head, of grain plants.
Helping cereals resist head scab
"I won't have anything to do with the scabs, but I do know some of the guys who crossed the picket.
Dispatches from Decatur: community is the first casualty in America's labor wars
The many replacement workers who have been hired on at Staley will now have union membership, making Local 7837 a union of scabs. As one of those severed from Staley, Watts is no longer a member of the union he now holds in contempt.
Labor takes its lumps