, séance
a meeting at which spiritualists attempt to receive messages from the spirits of the dead
Collins Discovery Encyclopedia, 1st edition © HarperCollins Publishers 2005

The word séance means "sitting." It is a sitting to communicate with spirits of the dead. It can be one on one (just the sitter and a medium) or it can involve a whole group with a medium. A medium is one who is able to bridge the gap between this world and the next—a connecting link between the living and the dead.

A group usually sits in a circle around a table, although it may form an open circle. Invariably the members hold hands to make a connection of energy. The séance often starts with the singing of songs to bring an attunement and to balance the vibrations of everyone present. There may then be a brief period of meditation, during which the medium will slip into trance. From there the medium, through a "Gate Keeper" or "Guardian," will relay messages between the people in the circle and their deceased loved ones.

Witches do not perform séances, but they do believe in communication with the spirits of the dead. This can be done in various ways, but is traditionally done at the sabbat celebration of Samhain. 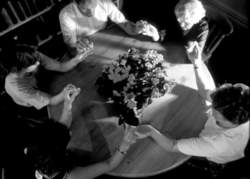 Participants in a séance attempt to summon and communicate with the spirit world. Courtesy Fortean Picture Library.

The meaning of the word séance is “sitting.” A séance is a sitting together of a group of people—usually including a medium—for a Metaphysical experiment. The people attending a séance are referred to as “sitters.” Such a gathering can be of any size, though a group of six or eight people is most common. Two friends sitting with a talking board would be considered as having a séance; in this case both of them acting as mediums. The medium is the channel through whom the spirits communicate.

People attend séances for a variety of reasons. Usually, the object is to make contact with spirits of the deceased in order to obtain information from them. This may simply be a sitter looking for confirmation that indeed the spirit does continue existence after death, or it may be seeking more specific information concerning the quality of life in the afterworld, or to investigate some past, present, or possible future happening in this world.

Séances can be held at any time of the day or night, though the majority seem to be held in the late evening. Certainly at that time the “vibrations” are better for spirit communication. This may be something to do with the atmosphere; radio waves seem to travel farther and with less interruption in the evening. There is also a certain stillness and clarity that is missing during the day. Additionally, of course, a private séance held in the late evening is less likely to be open to interruption from unexpected callers.

A séance lifts the veil between this world and the next, so that the living and the dead may temporarily reunite and communicate with one another. With physical mediumship, phenomena such as psychokinesis (the moving of objects without physical contact), levitation, materialization, and similar may be experienced. With a trance medium there may be clairvoyance, clairaudience, and direct voice communication … the speaking of a spirit through the medium’s vocal cords. The spirits speaking, either through the medium or by way of the medium’s spirit guide, can impart knowledge of the past, present, or even of the future.

The question of lighting at a séance is often debated. Some groups work in complete or near total darkness while others work in bright light. The darkness is usually called for when there will be materializations, because production of ectoplasm seems to be restricted by light. However, many times a red light is permissible, and today events can be monitored with infrared light and film. Some mediums will work in candlelight while others just dim the lights. A lowered level of light does seem preferable, if only to cut down on distractions and as being conducive to shifting consciousness and entry into trance.

Many séances take place with the sitters around a table. It is then usual to place the hands on the table, at least initially, with some groups spreading their arms so that little fingers touch with neighbor’s fingers, forming an unbroken circle of energy. Feet are usually kept flat on the floor, with legs uncrossed.

Whether or not there is a medium present, the group should have a leader. This person is responsible for everyone and, in a development circle, responsible for recognizing where talent is showing itself so that it may be encouraged. A brief meditation or the singing of a song at the start of the sitting is sometimes used as a relaxing and harmonizing tool, bringing everyone into accord.

As stated, the purpose of the séance can vary, as can the method of operating. Table tipping is sometimes part of a sitting, as is automatic writing,clairvoyance, clairaudience, clairsentience, direct voice, psychokinesis, levitation and materialization. The aim may be to communicate with one or more specific spirits, perhaps related to sitters, or it may be to make contact with virtually any spirits.

There are also private séances. Someone with a strong desire to communicate with a deceased friend or relative may arrange a private sitting with an accomplished medium for this purpose. In this instance there is seldom input in the form of energy from the sitter, who is there to witness the phenomena produced by the medium and to acknowledge the material presented.