divisions of the year characterized by variations in the relative lengths of day and night and in the amount of heat received from the sun. These variations depend on the inclination of the equator to the plane of the eclipticecliptic
, the great circle on the celestial sphere that lies in the plane of the earth's orbit (called the plane of the ecliptic). Because of the earth's yearly revolution around the sun, the sun appears to move in an annual journey through the heavens with the ecliptic as its
..... Click the link for more information.  and on the revolution of the earth around the sun. The amount of heat received at a given point on the earth's surface depends chiefly on the angle at which the sun's rays strike the earth at that point and on the daily duration there of exposure to the sun's rays; the more vertical the rays and the longer the exposure, the more heat will be received. Seasonal change varies greatly with latitude. Near the equator there is little change; in high latitudes spring and autumn are very short. In the temperate zones there are four well-defined seasons; in the north temperate zone, spring begins about Mar. 21, the vernal equinoxequinox
, either of two points on the celestial sphere where the ecliptic and the celestial equator intersect. The vernal equinox, also known as "the first point of Aries," is the point at which the sun appears to cross the celestial equator from south to north.
..... Click the link for more information. ; summer, about June 22, the summer solsticesolstice
[Lat.,=sun stands still], in astronomy, either of the two points on the ecliptic that lie midway between the equinoxes (separated from them by an angular distance of 90°).
..... Click the link for more information. ; autumn, about Sept. 23, the fall equinox; and winter, about Dec. 22, the winter solstice. However, the weather lags somewhat behind the seasons because, at the time of maximum sunlight (summer solstice for the Northern Hemisphere) the ground is still too cold to radiate as much heat as it receives, so average temperatures usually continue to rise for several weeks until a balance is reached between reception and radiation of heat. In low latitudes and in certain other areas (e.g., India) where oceans and winds are the chief factors governing seasonal changes, the terms "wet season" and "dry season" are used. The seasons play an important part in mythology and folklore; many holidays are connected with the changes of season.
The Columbia Electronic Encyclopedia™ Copyright © 2013, Columbia University Press. Licensed from Columbia University Press. All rights reserved. www.cc.columbia.edu/cu/cup/ 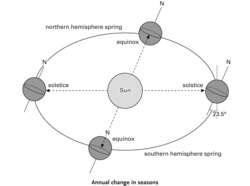 The four approximately equal divisions of the year, usually taken as lasting from equinox to solstice – spring and autumn – or from solstice to equinox – summer and winter. The seasons, which are more noticeable away from the equator, result from the inclination (23°.45) of the Earth's axis to the perpendicular to the Earth's orbital plane so that the Sun spends half the year north and the remaining year south of the celestial equator (see illustration). The varying distance of the Earth from the Sun has a minor effect on the seasons. Mars, with an axial tilt of 24°, also has seasons.
Collins Dictionary of Astronomy © Market House Books Ltd, 2006
The following article is from The Great Soviet Encyclopedia (1979). It might be outdated or ideologically biased.

(spring, summer, autumn, and winter), the long-established division of the year into periods according to the apparent motion of the sun through the heavens and seasonal changes in nature. The alternation of seasons takes place as a result of the fact that the earth’s axis of rotation is inclined toward the plane of the earth’s orbit at an angle of 66°33’. As the earth moves around the sun, the axis almost always shifts parallel to itself; therefore, during the year its northern and southern ends—that is, the corresponding terrestrial poles— are alternately inclined toward the sun. Therefore the sun heats and illuminates more strongly first the northern and then the southern hemispheres of the earth, as a result of which summer in the northern hemisphere coincides with winter in the southern, and vice versa.

The ellipticity of the earth’s orbit causes irregularity of the earth’s motion around the sun; therefore the seasons are not of identical length. The earth is closest to the sun in the beginning of January, when it passes through perihelion and its motion is most rapid. Therefore, winter in the northern hemisphere is the shortest season, and summer is the longest. At present, spring in the northern hemisphere lasts about 92.8 days, summer 93.6, autumn 89.8, and winter 89.0, for a total of 365.2422 days—the tropical year. The difference between the minimum and maximum distances of the earth from the sun during its motion in orbit is relatively small, as a result of which the change in the amount of solar heat received by the earth has virtually no effect on the change of seasons.

Phenological features. The annual changes of climatic indicators and the seasonal phenomena in nature are associated with the apparent annual motion of the sun. In the middle latitudes of the northern hemisphere there are four seasons. Various criteria are applied to determine the change of sea-sons. According to one criterion, winter is generally limited to the dates between which the mean daily air temperature remains lower than 0° C. The date on which the mean daily temperature rises and remains above 0° C is taken as the beginning of spring. In regions where the snow cover reaches a depth of 40-50 cm by the end of winter (the Northwest, the central European USSR, and the Byelorussian SSR), it thaws two to four days after the onset of a daily mean temperature of 0° C; in the northern and northeastern sections of the European USSR, where the snow cover is deeper than 60 cm, it disappears ten to 15 days after the temperature rises above 0° C. In the southern regions of Siberia, as a result of exposure to direct solar radiation and positive temperatures during the midday hours, the snow cover (25-30 cm) melts ten to 12 days before the temperature exceeds 0° C. Such phenomena as the pollination of the alder, the arrival of starlings, and the beginning of ice drift on small rivers are associated with the beginning of spring. The day beginning with which the mean daily temperature reaches 70 percent of the temperature of the warmest month of the year is considered the beginning of phenological summer. Under different soil and geographical conditions the beginning of summer is characterized by different phenological phenomena—from the point at which apple trees begin to blossom to the flowering of the lilac or European mountain ash; sometimes the beginning of summer is associated with the flowering of the bird cherry. Summer accounts for 60 percent of the duration of the growing season—that is, the period having a mean daily temperature of over 5° C. During the summer the sum of positive air temperatures accumulates, causing a mean annual temperature of over 0° C. In a climatic sense summer occurs only in places where winter exists—that is, where the mean temperature for at least one month of the year is less than 0° C. The day by which 60 percent of the growing season has passed, counting from the beginning of summer, is taken as the beginning of fall (see Table 1).

An example for Moscow is as follows: mean July temperature

The northern boundary of the four-season belt in Europe coincides with the southern boundary of the tundra; in Asia it passes more to the south—through Tobol’sk and Tomsk and to the north of Blagoveshchensk. It intersects Sakhalin Is-land along the 50th parallel and the Kamchatka Peninsula along the 56th and 57th parallels. In America it passes to the north of the Alaskan peninsula, to the south of James Bay, and along the Labrador peninsula and the southern tip of Greenland. To the north of this boundary there is no true summer. Here there are three seasons—winter, a prolonged spring, and fall. In this three-season zone the day by which 60 percent of the growing has passed since the date of passage of the mean daily temperature above 5° C, which is taken as the start of the growing season, is also taken as the start of fall. In the tundra the start of autumn coincides with the flight of the cranes.

In tropical and equatorial countries the temperature has no clearly expressed annual progression. The growing season period lasts year-round. Here there are dry and moist periods. The latter are characterized by monsoon rains, whose zone shifts together with the tropical front, which fol-lows the sun’s motion between the tropics. In the equatorial zone there are four seasons: two moist seasons, which set in about the time of the equinoxes; and two dry seasons, which come about the time of the solstices. In tropical countries the moist periods are more prolonged and occur in months close to the solstices. The dry periods are shorter.

Feedback
Flashcards & Bookmarks ?
Please log in or register to use Flashcards and Bookmarks. You can also log in with
Flashcards ?
My bookmarks ?
+ Add current page to bookmarks
Mentioned in ?
References in classic literature ?
“How?” said Kirby, looking up with a simplicity which, coupled with his gigantic frame and manly face, was a little ridiculous, “if you be for trade, mounsher, here is some as good sugar as you’ll find the season through.
Chopping comes quite natural to me, and I wish no other employment; but Jared Ransom said that he thought the sugar was likely to be source this season, seeing that so many folks was coming into the settlement, and so I concluded to take the ‘bush’ on sheares for this one spring.
View in context
All that we can do, is to keep steadily in mind that each organic being is striving to increase at a geometrical ratio; that each at some period of its life, during some season of the year, during each generation or at intervals, has to struggle for life, and to suffer great destruction.
View in context
Status: Renewed for two more seasons (Season 6 premieres May 10)
Is your favorite TV show canceled? A guide to what's renewed and what's in limbo
"Game of Thrones," over the course of its eight seasons, has filmed in 10 countries, including Northern Ireland, Republic of Ireland, Morocco, Malta, Spain, Croatia, Iceland, United States, Canada and Scotland.
'Game of Thrones': Fun facts and figures to know
Dave Hill, who wrote one episode in each of the last three seasons, has the writing credits for the first episode of Season 8.
'Game Of 'Thrones' Season 8 Runtime May Have Been Leaked
Four Seasons Hotels and Resorts, the world's leading luxury hospitality company, has been awarded 36 Five-Star ratings by Forbes Travel Guide, the highest honour from the guide.
Four Seasons Hotels and Resorts Receives Record Number of Forbes Travel Guide Five-Star Awards for Fourth Year Running
The Blues have hit their Season Ticket cap for the past two seasons and demand is growing year-onyear.
Last chance to buy Blues season tickets on Direct Debit; evertonfc
Head coach Mitch Ocholla is targeting to get the Rift Valley-based side back to the playoffs after missing out in the last two seasons .
KRU changes local calendar, transfer period
Four Seasons Hotels and Resorts has announced that Forbes Travel Guide has awarded its highest honour, a five-star rating, to 33 Four Seasons properties worldwide.
Four Seasons hotels receive Forbes five-star rating
Todd Cilano has been appointed regional vice president and general manager of Four Seasons Hotel Doha.
Todd Cilano is now RVP and GM of Four Seasons Doha
Boro have kicked off the last two seasons at the Riverside, and one positive about next year is that fans will be able to tick off a new ground following the promotion of MK Dons.
All you need to know about who Boro play next season