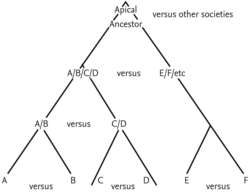 Fig. 27 Segmentary societies. At each level, membership of a descent group (A; A/B; A/B/C/D; etc.) defines the basis of allegiance and mutual support(e.g. in feuds).

forms of STATELESS SOCIETY, whose fundamental mode of social organization is a lineage system in which descent group membership is defined in terms of, sometimes notional, common ancestors (apical ancestor). Such systems, involve a hierarchical structure, which at each level defines expected bases of membership and opposition (see Fig. 27). A classical account of such a system is EVANS-PRITCHARD's (1940) account of the Nuer. However, this account, and the concept of segmentary society in general, has been criticized as presenting only an ‘ideal’ model of social relationships in such societies. see also SEGMENTARY STATES.
Collins Dictionary of Sociology, 3rd ed. © HarperCollins Publishers 2000

Feedback
Flashcards & Bookmarks ?
Please log in or register to use Flashcards and Bookmarks. You can also log in with
Flashcards ?
My bookmarks ?
+ Add current page to bookmarks
Mentioned in ?
References in periodicals archive ?
(8) Hudson's classification seems to agree with that of Robin Horton, who in his study of segmentary societies established dispersed and nucleated settlements as the patterns among segmentary societies.
Settlements relocation in Northern Nigeria: a historical analysis of the colonial resettlement scheme in Yagbaland, 1900-1950
This sort of organization helps to "affirm the rights of segmentary societies in opposition to the organs of State power." (p.
Perpetual modernity, ever becoming modernity: re-reconciling state, society and aesthetic ideals
Generally, there are two types of indigenous leadership systems among segmentary societies in the South Pacific: clan leadership in Melanesia and chief leadership in Polynesia (Strathern & Godelier, 1991).
Re-defining the role of tribal leadership in the contemporary governance systems of Papua New Guinea