[‚flaj·ə′lā·shən]
(biology)
The arrangement of flagella on an organism.
(psychology)
Beating or whipping as a means of producing sexual gratification.
McGraw-Hill Dictionary of Scientific & Technical Terms, 6E, Copyright © 2003 by The McGraw-Hill Companies, Inc. 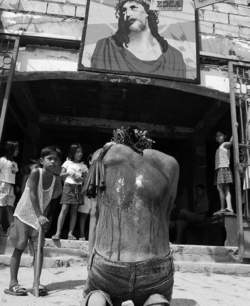 A practice that emerged in the European Dark Ages and still survives today is self-flagellation. In this photo, a penitent in Cutud, San Fernando, Philippines, follows the whipping ritual. Getty Images.

Flagellation, the scourging of oneself or others, was a widespread form of punishment in the ancient world and as such has continued to the present day, though acquiring prominent critics. Religiously, flagellation acquired a place in the liturgical world of Western Christianity in the Middle Ages as increasingly more prominence was placed on the sufferings of Christ during the last week of his life. One expression of the contemplation of the sufferings of Christ was self-flagellation, a practice that took on added dimensions as a means for the expiation (doing penance) for one’s sins. Christian self-flagellation as a popular practice can be traced to Italy and to the likes of Bishop Peter Damian (1007–1072), later named a doctor of the church. The practice entered the life of the Franciscans and Dominicans, and it was ultimately spread to several confraternities in the thirteenth century who made self-flagellation a keystone of their piety. By the high Middle Ages, it had become one of the most common forms of penance throughout Christendom. It was lauded as an expedient means of moving from a life oriented on desire to one focused on spiritual realities.

Groups that based their common life on flagellation began to see their role as doing not only self-penance but penance for all of Christendom. Such penance was understood as effective in averting disasters, especially those attributed to divine wrath. In the thirteenth century, penitential processions that included flagellants emerged, and various attempts by church authorities to curb the practice led in 1349 to a papal condemnation of such processions as heretical. While the condemnation (and the general abandonment of self-flagellation altogether by Protestants) limited the public demonstrations of self-flagellation, it did not greatly affect its use in private in religious orders. In the modern world it had become increasingly out of fashion, especially since Vatican II, when the more extreme forms of self-flagellation were mentioned disapprovingly.

Within the Roman Catholic tradition, self-flagellation (as well as more traditional portrayals of Christ’s suffering during Passion week) is generally practiced among more conservative believers. It is, for example, reportedly a common practice used by members of the somewhat secretive Opus Dei organization. It is a regular part of the Easter celebration in several Catholic countries, the Philippines being the best documented. In the United States, large crowds gather annually for the reenactment of the Easter week events by the Penitentes of New Mexico.

However, Christianity is not the only place where flagellation has taken on religious meanings. For example, self-flagellation is a central part of the Shi’a Muslim holiday Ashura. Ashura begins on the eve of the 10th day of the Islamic month Muharram to commemorate the martyrdom of Imam Hussein, the grandson of Prophet Mohammad, who was killed at Karbala (Iraq) in 680 CE by those who opposed his claim to become the successor of Ali as caliph. The mourning ceremonies include self-flagellation and self-mutilation. Banned under the reign of Saddam Hussein, Ashura was celebrated in Karbala for the first time in forty years in 2003.

Flagellation, though of a more staid variety, was introduced into modern Witchcraft (or Wicca) by Gerald B. Gardner, its progenitor. According to Wiccan historian Aidan Kelly, Gardner was addicted to being whipped (a sexual practice often associated with British males). While other Wiccans have suggested that Kelly simply overstated the case, the use of scourging in Gardnerian rituals indicates a more positive approach to the practice. Here, it is tied not to penance and mourning, but put forward as one of a variety of means to develop one’s magical skills. Other paths include the use of meditation or of trance states. In the Gardnerian rituals, the person being scourged is bound and the strokes delivered in a light, steady, monotonous, and slow fashion. Some have attempted to connect such flagellation with its use for erotic stimulation as part of various sexual practices.

Devotees of the goddess Isis, priests of Cybele, followers of Dionysus, the ancient Greek cult of the Spartans, and other religious followers of many different persuasions have recognized flagellation, or ritual scourging, as a necessary part of religious rites. In its broadest sense it is a spiritual cleansing.

The life-size frescos on the walls of the Initiation Room at the Villa of the Mysteries, just outside Pompeii, Italy, include a scene showing a priestess of Dionysus scourging an initiate. In the Wiccan initiation there is a similar ritual scourging as part of the palingenesis, which is the central theme of all initiations. It is a symbolic death prior to rebirth. Since it is symbolic, it is not designed to hurt the neophyte. The Wiccan scourge, in fact, is a whip made with thongs of silk or a similarly soft material. They are not knotted or in any way enhanced to produce pain.

Flagellation, or scourging, is also used by some Witches to raise power when working magic. There are many ways of raising this cone of power—dancing, chanting, singing, or sex, for example—and ritual scourging is one of them. Here again, the design is not to bring pain. The recipient (in some traditions this would be the priestess of the coven) is repeatedly scourged, but the thongs of the instrument are drawn across the body repeatedly in an almost hypnotic movement. The Book of Shadows, the coven's ritual text, states that "the Scourge is used to bring blood to the surface of the skin, not to hurt."

Yet the witchcraft practiced in the Middle Ages included a scourging that was designed to hurt. In the records of the 1662 trial of the Scottish Auldearne witches, Issobel Gowdie spoke of the leader of the coven beating them: "He would beat and buffet us very sore. We would be beaten if we were absent any time, or neglect anything that would be appointed to be done. . . . He would be beating and scourging us all up and down with cords and other sharp scourges." Of the Northumberland witches (1673), it was reported, "All of them who had done harm gave an account thereof to their protector, who made most of them that did most harm and beat those who had done no harm."

Feedback
Flashcards & Bookmarks ?
Please log in or register to use Flashcards and Bookmarks. You can also log in with
Flashcards ?
My bookmarks ?
+ Add current page to bookmarks
Mentioned in ?
References in periodicals archive ?
We provide epidemiologic findings and HTLV-1 proviral load (HTLV-1 DNA copies/100 peripheral blood mononuclear cells) for this case-patient and 9 other asymptomatic HTLV-1 carriers of similar demography who reported a history of self-flagellation in Iraq, Pakistan, India, or the United Kingdom (Table).
Self-Flagellation as Possible Route of Human T-Cell Lymphotropic Virus Type 1 Transmission
They chanted for Imam Hussein as they continued their self-flagellation. "Do not ask me what I am doing, ask me instead why you are not, because the Imam Hussein is alive in all of our hearts, and our love and obedience for him kill the pain," insisted one of the men.
Nabatieh defies Nasrallah with Ashoura self-flagellation ritual
One of the latest catchphrases for pundits is: "You don't want to have two weeks to dwell on it." And with an international break upon us, a defeat at Upton Park would have led to a fortnight of unimaginable suffering and self-flagellation among Evertonians.
Conjurer Saha so good making his goal chances; BLUE WATCH MARK O'BRIEN - HAS FANTASTIC FEELING BACK
Some descendants of these New Christians in this region formed Catholic brotherhoods or Penitentes, who still engage in out- dated rituals including self-flagellation. Moradas are their chapels.
Marranos on the moradas; secret Jews and Penitentes in the southwestern United States, from 1590 to 1890
For any Labour party member to exert even the merest whiff of confidence is to risk being accused of losing touch with reality but indulge in the self-flagellation option and the election is already lost.
Labour's balancing act - between talk of delusion and desperation
The journal begins with the aspiring poet eagerly parsing the distinction between the "material unity" and "spiritual unity" of his work and claiming "how allusive, how all-pervading, every future subject must be to me..." Soon, though, whatever hope that might underlay his passionate purposefulness is crushed by self-flagellation: "Have I really ever asked myself what I ought to do according to conscience?
Cesare Pavese. This Business of Living: Diaries 1935-1950
I am not interested in self-flagellation. Rather, it is important to recall a more complex historic relationship than mere conquest and to recast the difficulties of accommodation, memory and reconciliation as the 'settler problem,' rather than, as the policymakers once put it, the 'Indian problem.'" (p.5)
We Are All Treaty People: Prairie Essays
Swarming crowds in Karbala on Tuesday joined sombre processions in which men and even some boys, accompanied by drummers, beat their chests and engaged in the devotional self-flagellation that characterises the Ashura rituals.
Tight security for Ashura in Iraq
As this piece is being written, America's quadrennial self-flagellation over choosing a new president is underway, and by the time it arrives in your mailbox, a new president will have been elected.
Health care after the election
MediaNews Group Vice President of Research Mike Baldwin wants newspapers to stop their "self-flagellation" with widely reported circulation declines -- and to start telling the story of growing newspaper audiences.
Stop Trumpeting Circ Losses And Report Growing Audience, MediaNews Exec Says
Thousands of devout followers in Manila reenact the death of Jesus and stage self-flagellation to prove their faith during Holy Week.
For God's sake, use clean nails; strange but true Bizarre stories from around the world
In a very adroit and rather matter-of-fact fashion, von Hausswolff fearlessly tackles issues of gender and group alienation, as well as the conventions of sexual allure and humankind's apparently bottomless appetite for self-flagellation. One might sometimes query certain Nordic indulgences in shame and humiliation, but they are never not to the point.
Annika Von Hausswolff