instrument for measuring the altitude of the sun or another celestial body; such measurements can then be used to determine the observer's geographical position or for other navigational, surveying, or astronomical applications. The term sextant is used generally to include related devices such as the quadrant, quintant, and octant. The sextant was invented independently in England and America in 1731. Its construction is based on the principle that a reflected ray of light leaves a plane surface at the same angle at which the direct ray strikes the surface. The sextant consists basically of a triangular frame, the bottom of which is a graduated arc of 60°; a telescope is attached horizontally to the plane of the frame. A small index mirror is mounted perpendicular to the frame at the top of a movable index arm or bar, which swings along the arc. In front of the telescope is the horizon glass, half transparent and half mirror. The image of the sun or other body is reflected from the index mirror to the mirror half of the horizon glass and then into the telescope. If the index (or image) arm is then adjusted so that the horizon is seen through the transparent half of the horizon glass, with the reflected image of the sun lined up with it, the sun's altitude can be read from the position of the index arm on the arc. By reference to navigational tables, the geographical position can then be determined. A sextant may be used on land with an "artificial horizon"—a small, shallow receptacle containing mercury, which gives a truly horizontal surface. In aerial navigation a bubble octant—sometimes called a bubble sextant—is used, in which a spirit level is reflected into the field of view in such a way that the center of the bubble indicates the true horizon.

a reflecting goniometer for measuring the altitudes of celestial bodies above the horizon or the angles between visible objects, for example, on a shore, in order to determine the coordinates of the observer’s location. Angles up to 140° can be measured with a sextant.

In order to determine the position of a ship or aircraft from observations of celestial bodies by means of a sextant, the altitudes of several celestial bodies above the visible horizon are usually measured. When a measurement has been obtained, corrections are made that take into account the dip of the visible horizon, the apparent radius of the celestial body, and other factors. A correction for the calculated coordinates is determined (analytically or, more often, graphically) by using the formulas and procedures of nautical astronomy and aviation astronomy.

The most important feature of a sextant is its ability to align simultaneously in the observer’s field of view the two objects whose angular displacement is being measured, for example, two celestial bodies or a celestial body and the horizon. This makes it possible to use a sextant on an aircraft or ship with no appreciable lowering of accuracy, even when the craft is pitching or rolling. Sometimes the altitudes of celestial bodies are measured with a sextant using an artificial horizon by observing a celestial body and its image reflected in a cup filled with an oily liquid; in this case, the cup must be on a fixed base. The two altitudes measured in this way are free of the errors resulting from an incorrect calculation of the horizon’s dip; the need for certain other corrections is also eliminated.

The operating principle of a sextant is based on the laws governing the reflection of light from plane mirrors. The beam from the primary object—the line of the horizon—passes above the silvered portion of the horizon glass (see Figure 1) and enters the telescope. The beam from the secondary object—a celestial body—is reflected successively from the index glass and the horizon glass; it then enters the telescope when the position of the index glass, which is attached to the alidade, corresponds to the angle being measured. The reading of the measured angle is obtained from the calibrated limb and drum of the reading device. On a ship, the accuracy of angles measured with a sextant varies according to the training of the observer; it ranges from several tenths to one minute of arc. On an aircraft, the measuring accuracy is somewhat poorer. 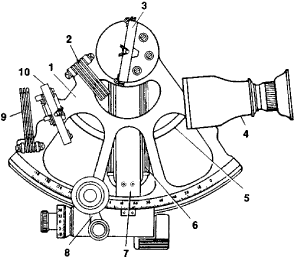 A sextant was developed in the middle of the 20th century that featured an automatic level or plumb bob (a gyroscopic pendulum). Such an arrangement makes it possible to measure the altitudes of celestial bodies in the absence of a visible horizon. This type of sextant has become popular in aviation. In order to reduce the measuring errors that result from the accelerations experienced on an aircraft or ship, the sextant has an averaging mechanism with an averaging period of 40 to 200 sec.

Sextants were first constructed in 1730–31 by John Hadley (England) and, independently, by Thomas Godfrey (USA). However, the concept behind the sextant’s mechanism was proposed by I. Newton as early as 1699 (Newton’s notes were not published until 1742). Early instruments had a measuring arc of one-eighth of a circle and were called octants. Later, the arc was increased to one-sixth, and the name “sextant” was used. In modern sextants the measuring arc has been increased to almost 1/5 of a circle, but the name of the instrument has not changed.

[′sek·stənt]
(mathematics)
A unit of plane angle, equal to 60° or π/3 radians.
(navigation)
An optical instrument; a double reflecting instrument used in navigation for measuring angles, primarily altitudes of celestial bodies. 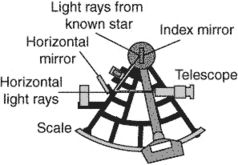 A double-reflecting instrument for measuring angles, primarily altitudes of celestial bodies. As originally used, the term applied only to instruments having an arc of 60°, one-sixth of a circle, hence, its name. Such an instrument had a range of 120°. In modern practice, the term applies to a similar instrument, regardless of its range, and very few modern instruments are sextants in the original sense.

1. an optical instrument used in navigation and consisting of a telescope through which a sighting of a heavenly body is taken, with protractors for determining its angular distance above the horizon or from another heavenly body
2. a sixth part of a circle having an arc which subtends an angle of 60°