An optical method of rendering fluid flow patterns visible by using index-of-refraction differences in the flow. The method relies on the fact that rays of light bend toward regions of higher refractive index while passing through a transparent material. The fluid is usually illuminated by a parallel beam of light. The illustration depicts the method as it might be applied to a fluid sample undergoing thermal convection between two parallel plates, with the lower plate being kept warmer than the upper one. As illustrated, the rays bend toward the cooler down-flowing regions, where the refractive index is higher, and away from the warmer up-flowing ones. After they have passed through the fluid layer, the rays tend to focus above the cooler regions and defocus above the warmer regions. If an image of the light beam is recorded not too far from the sample, brighter areas of the image will lie above regions of down flow, where the rays have been concentrated, and darker areas will lie above regions of up flow. Because the light passes completely through the sample, the bending effect for each ray is averaged over the sample thickness. See Convection (heat), Refraction of waves 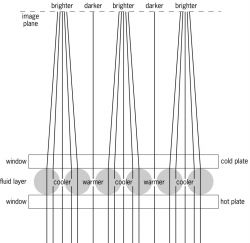 In convection experiments the refractive index varies because of thermal expansion of the fluid, but the method is not restricted regarding the mechanism responsible for disturbing the refractive index. Thus the same method may be used to visualize denser and less dense regions in a gas flowing in a wind tunnel, including Mach waves and shock waves, where the denser regions have a higher-than-average refractive index. See Shock wave, Supersonic flow

Images are usually recorded by means of a charge-coupled-device (CCD) camera, digitized, and stored in a computer. Such a digitized image consists of an array of numbers, each number being proportional to the brightness at a particular point in the image. The image points (pixels) form a closely spaced rectangular grid. A reference image may be taken in the absence of any fluid flow, and the reference image may be divided point by point into images taken with the fluid moving.

[′shad·ō‚graf]
(graphic arts)
A photographic image in the form of a shadow.
radiograph
(optics)
A simple method of making visible the disturbances that occur in fluid flow at high velocity, in which light passing through a flowing fluid is refracted by density gradients in the fluid, resulting in bright and dark areas on a screen placed behind the fluid.
McGraw-Hill Dictionary of Scientific & Technical Terms, 6E, Copyright © 2003 by The McGraw-Hill Companies, Inc.

Feedback
Flashcards & Bookmarks ?
Please log in or register to use Flashcards and Bookmarks. You can also log in with
Flashcards ?
My bookmarks ?
+ Add current page to bookmarks
Mentioned in ?
References in periodicals archive ?
A single value for the spray angle and the spray bend angle in each test are available from the quasi-steady state between 0.5 ms and 1.0 ms ASOI for tests with Mie scattering diagnostics, and for the 452 K condition with the shadowgraph diagnostics.
Comparison of Direct-Injection Spray Development of E10 Gasoline to a Single and Multi-Component E10 Gasoline Surrogate
The peripheral soot sampling was conducted at three different locations, z=60 mm: r=6mm, z=80 mm: r=12 mm, z=100 mm: r=12 mm for axial and radial distances respectively, which were determined based on the high-speed laser shadowgraphs.
Soot Oxidation in Periphery of Diesel Spray Flame via High-Speed Sampling and HR-TEM Observation
The optical system was constructed to visualize the ignition, flame kernel development, and flame propagation by a shadowgraph imaging.
Laminar Burning Velocity Measurements in DIPK-An Advanced Biofuel
Focusing schlieren and shadowgraph systems were the primary tools used for airflow visualization.
Capture and containment ventilation rates for double-island canopy hoods
However, researchers have now demonstrated that they can capture "shadowgraphs" of objects embedded in tissue by concentrating on the fraction of a light pulse that passes most rapidly through a tissue sample.
Needle imaged in animal-tissue haystack
Typically, Schlieren imaging and shadowgraphs were used to visualize the density variations occurring under choked flow conditions [27].
Generation of Turbulence in a RCEM towards Engine Relevant Conditions for Premixed Combustion Based on CFD and PIV Investigations
Capture and containment was validated using two schlieren systems and two shadowgraph systems, which allowed real time visualization of the thermal and cooking plumes (Schmid et al.
Capture and containment ventilation rates for single-island canopy hoods
The burning spray was visualized using the shadowgraph method.
Theoretical Study on Spray Design for Small-Bore Diesel Engine (Second Report)
The standard X-ray picture is a shadowgraph. It shows that somewhere in the object a certain amount of energy was removed from the X-ray beam, but it doesn't tell at what depth in the object the removal took place.
X-ray microscopy in 3-D; microtomography resolves micron-sized structures inside solid objects
[18.] Settles, G.S., (2012) Schlieren and shadowgraph techniques: visualizing phenomena in transparent media, Springer Science & Business Media,
Optimization of an Advanced Combustion Strategy Towards 55% BTE for the Volvo SuperTruck Program
The capture and containment conditions were established for full-load cooking conditions using two full-scale schlieren systems and one shadowgraph system that allow visualization of the thermal and cooking plumes in real time (Schmid, et al, 1997).
Capture and containment ventilation rates for commercial kitchen appliances measured during RP-1362