1. the religion of certain peoples of northern Asia, based on the belief that the world is pervaded by good and evil spirits who can be influenced or controlled only by the shamans
2. any similar religion involving forms of spiritualism
http://www.shamanism.co.uk/
http://www.faqs.org/faqs/shamanism/overview/
Collins Discovery Encyclopedia, 1st edition © HarperCollins Publishers 2005 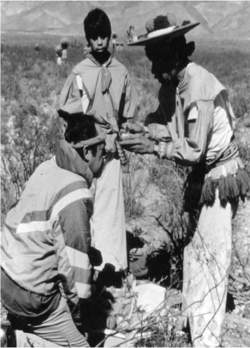 An Huichol Indian shaman performs a ritual in the desert of Wirikuta, Mexico; photographed in 1998. Courtesy Fortean Picture Library.

Ashaman is a priest/magician/healer especially as found in such areas as Siberia, Indonesia, Oceania, North and South America, Tibet, China, and Japan. Tools of the shaman usually include a specific costume and a drum. The shaman holds a type of séance, usually going into trance. The Altaic shaman ritually climbs a birch tree, into the trunk of which have been cut a number of steps. The birch symbolizes the World Tree and the steps are the various “heavens” through which the shaman must pass on his ecstatic journey to the highest heaven. There is an interesting parallel here with the various “spheres" or “levels” depicted in Spiritualism and detailed by Emanuel Swedenborg.

According to Mircea Eliade, “Shamanism in the strict sense is preeminently a religious phenomenon of Siberia and Central Asia. The word comes to us, through the Russian, from the Tungusic saman … the magico-religious life of society centers on the shaman.” Nandor Fodor suggests that the name also comes from the Sanskrit sramana, meaning an ascetic. Fodor clarified, “As distinct from priests, shamans have no ritualistic knowledge but operate rather like Spiritualist mediums.”

There are three ways to become a shaman. The first is by spontaneous vocation; by realizing that one has been “called” to it. The second is by hereditary transmission of the profession. The third is by personal “quest.” But as Eliade points out “By whatever method he may have been designated, a shaman is recognized as such only after having received two kinds of instruction. The first is ecstatic (for example, dreams, visions, trances); the second is traditional (shamanic techniques, names and functions of the spirits, mythology and genealogy of the clan, secret language).”

an early form of religion among most peoples.

Originating in the period of the primitive communal system, shamanism was based on faith in the shaman’s communication with spirits, which occurred when the shaman was in a state of kamlanie (ritual ecstasy). The forms of kamlanie, the concept of the spirits, and the shaman’s degree of specialization differed among different peoples. Some peoples retained vestiges of shamanism even under the conditions of class society.

Shamanism acquired complex forms among such Siberian peoples as the Tuvinians, Evenki, and Yakuts. The Siberian shamans dressed in special costumes, and their kamlanie, which involved the playing of tambourines, included frenzied dances and the use of hypnosis, ventriloquy, and various tricks. In kamlanie the shaman enacted a trip to the world of the spirits (sometimes on a “horse” or “deer,” represented by the tambourine) and a struggle against the spirits. Professional shamans were nervous, easily excited people who were able to put themselves into a state of ecstasy or hallucination that became a self-regulated hysterical fit.

Among some peoples of Asia, Africa, Central America, and Polynesia, shamanism coexisted with other forms of religion. Vestiges of shamanism are retained in many later religious systems; examples include the radenie (prayer accompanied by dance) of the Khlysty and the dhikr ritual of the dervishes in Islam. Among the peoples of the USSR, shamanism has almost completely disappeared.

Feedback
Flashcards & Bookmarks ?
Please log in or register to use Flashcards and Bookmarks. You can also log in with
Flashcards ?
My bookmarks ?
+ Add current page to bookmarks
Mentioned in ?
References in periodicals archive ?
The institutionalisation of the traditional shamanic vocation in the context of religious organizations is closely linked with the official restoration of 'shamanism' as one of the 'traditional confessions' of the autonomous Republic of Tyva after the collapse of the Soviet regime (3) (see Lindquist 2011).
Resorting to shamanic agencies: Filling in for the failure of the official institutions in a Siberian periphery (Tyva Republic, Russia)
First, the religious subject of spirit possession can speak specifically to both Christianity and shamanism in South Korea.
Uncomfortable proximity: perception of Christianity as a cultural villain in South Korea
"It is who we become that changes the world, not what we do," is very much the credo of shamanism. To empower that becoming is the goal of this book.
Walking in Light; The Everyday Empowerment of a Shamanic Life
Throughout, this volume assumes that shamanism adapted to accommodate Christianity, recognizing in the European religious framework aspects of meaning-making with which it was willing to relate.
Inuit Shamanism and Christianity: Transitions and Transformations in the Twentieth Century
Even his reference to being sent back, seen in the world of Middle-earth as a reference to the Valar or perhaps even Eru, can be accommodated to a shamanic system that locates a monotheos at the top of the "ladder of spirit powers," a supreme being distant from the human world, or a demiurge, both less distant and less powerful than the monotheos, but involved in the initiation of the shaman (Glosecki, Shamanism 33).
Totemic reflexes in Tolkien's Middle-earth
The editors claim that judging "them by their fruit is the key to entering into dialogue with shamanism" (9).
Shamanism and Christianity: Religious Encounters among Indigenous Peoples of East Asia
Jones remarked, The field of shamanism has grown rapidly since the 1970s, yet until now there has been no comprehensive bibliography on the phenomenon available for people to consult.
Bauu Press Celebrates the Publication of a Comprehensive Bibliography on Shamanism
His dissertation, debunked as a work of fiction by academicians and the Yaqui tribe, was nevertheless published as The Teachings of Don Juan, galvanizing a shamanism movement in the U.S.
Should Non-Natives Practice Indigenous Religions?
This is not a religious facility nor do we prostalize the "religion" of shamanism as shamanism is not a religion.
Musical instruments from gourds
Shamanism has existed since the beginning of time as a spiritual practice, philosophy, and system of healing.
The shamanic journey: tapping the spiritual wisdom within
Tedlock has not just read a lot; she had read a lot for years, traveling the world participating in shamanic rituals and initiating the international scholarly discussion of shamanism. In short, she commands her material; she knows the history of the scholarship, where it went wrong, where it was rethought, and why.
The priests were women
When I started dreaming in Mohawk and studying shamanism, some of my fierce Scottish ancestors started walking through my dreams, basically saying, "Look here laddie, we know a few things too.
Dreaming the soul's path: interview with Robert Moss for New Life Journal (Part 2)