1. the part of the vertebrate body where the arm or a corresponding forelimb joins the trunk: the pectoral girdle and associated structures
2. the joint at the junction of the forelimb with the pectoral girdle
3. the strip of unpaved land that borders a road
4. Engineering a substantial projection or abrupt change in shape or diameter designed to withstand thrust
5. Photog the portion of the characteristic curve of a photographic material indicating the maximum density that can be produced on the material
Collins Discovery Encyclopedia, 1st edition © HarperCollins Publishers 2005

A projection or break changing the thickness or width of a piece of shaped wood, metal, or stone.

of man, the segment of the upper extremity closest to the trunk.

The shoulder is bounded above by the shoulder joint and below by the elbow joint. The base of the shoulder is formed by the humeral bone, which has a body, an upper joint surface (caput, or head) to unite with the shoulder blade, and a lower joint surface (trochlea of the humerus) to unite with the bones of the forearm. The part of the bone under the head is called the neck of the shoulder. The shoulder bone is surrounded by longitudinally situated muscles—biceps and brachialis in front and triceps in back. The muscles are covered by a layer of connective tissue, subcutaneous fatty tissue, and skin. Deep in the soft tissues of the muscles are the blood vessels and nerves—the humeral artery and veins and the radial, ulnar, and median nerves. Superficial nerves, arteries, and veins are situated in the subcutaneous tissue.

Traumata of the shoulder include injuries to muscles, tendons, nerves, and blood vessels, as well as fractures—most commonly of the neck of the humerus.

[′shōl·dər]
(anatomy)
The area of union between the upper limb and the trunk in humans.
The corresponding region in other vertebrates.
(design engineering)
The portion of a shaft, a stepped object, or a flanged object that shows an increase of diameter.
(engineering)
A projection made on a piece of shaped wood, metal, or stone, where its width or thickness is suddenly changed.
(geology)
A short, rounded spur protruding laterally from the slope of a mountain or hill.
The sloping segment below the summit of a mountain or hill.
A bench on the flanks of a glaciated valley, located at the sharp change of slope where the steep sides of the inner glaciated valley meet the more gradual slope above the level of glaciation.
A joint structure on a joint face produced by the intersection of plume-structure ridges with fringe joints.
(graphic arts)
That part of a plate or type that extends beyond the actual printing surface.
McGraw-Hill Dictionary of Scientific & Technical Terms, 6E, Copyright © 2003 by The McGraw-Hill Companies, Inc.

1. A projection or break made on a piece of shaped wood, metal, or stone, where its width or thickness is suddenly changed. Also called ear, elbow.
2. The surface bordering a road, esp. where a vehicle can be parked in emergency.
3. The angle of a bastion included between the face and the flank of a fortification. Also called shoulder angle.
McGraw-Hill Dictionary of Architecture and Construction. Copyright © 2003 by McGraw-Hill Companies, Inc. 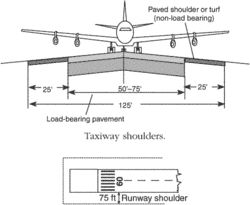 An area adjacent to the edge of a pavement so prepared as to provide a transition between the pavement and the adjacent surface (ICAO).
An Illustrated Dictionary of Aviation Copyright © 2005 by The McGraw-Hill Companies, Inc. All rights reserved

Feedback
Flashcards & Bookmarks ?
Please log in or register to use Flashcards and Bookmarks. You can also log in with
Flashcards ?
My bookmarks ?
+ Add current page to bookmarks
Mentioned in ?
References in classic literature ?
When the waiter had felt my fast cooling tea-pot with the palm of his hand, and had looked imploringly at me, and had gone out, Drummle, careful not to move the shoulder next me, took a cigar from his pocket and bit the end off, but showed no sign of stirring.
View in context
After each repulse, when the old wolf sheered abruptly away from the sharp-toothed object of his desire, he shouldered against a young three-year-old that ran on his blind right side.
View in context
Michael sprang away again, and was numbly aware of an ancient joy as he shouldered Jerry who shouldered against him as they ran side by side.
View in context
"No, I don't throw stones," she was saying, in answer to something, "though I can't understand it," she went on, shrugging her shoulders, and she turned at once with a soft smile of protection towards Kitty.
View in context
He came quite close to the officer and laid a paw upon one of the man's shoulders, studying his face intently for a long moment, then came the expression of disappointment accompanied by what was almost a human sigh, as he turned away to peer in the same curious fashion into the faces of the mate and the two sailors who had arrived with the officers.
View in context
With this idea in mind she turned to search for some means of putting it into execution; but her first view of the interior of the cabin brought a shriek of terror to her lips, and like a frightened child the huge woman ran to bury her face on her mistress' shoulder.
View in context
But he was receiving the blows on his gloves and shoulders, rocking back and forth to the force of them like a tree in a storm, while the house cheered its delight.
View in context
He rushed, as though attempting the old shoulder trick, but at the last instant swept low to the snow and in.
View in context
Now when the son of Lycaon saw him scouring the plain and driving the Trojans pell-mell before him, he aimed an arrow and hit the front part of his cuirass near the shoulder: the arrow went right through the metal and pierced the flesh, so that the cuirass was covered with blood.
View in context
Three times the young reporter sprang at Ed Handby and each time the bartender, catching him by the shoulder, hurled him back into the bushes.
View in context
At midnight when the mate touched him on the shoulder, in the moment of awakening and before he was awake Van Horn did two things automatically and swiftly.
View in context
The shoulders have known no ignobler burden than iron mail, and they will not stoop."
View in context