Adjacent flight strips are photographed so that there is a lateral overlapping of strips. It is known as lateral overlap or side overlap. This overlap amounts to 15 to 35% but is generally 30%. In a multicamera installation, the cameras are adjusted to provide a 10% overlap between the prints of adjacent cameras. Also called a sidelap. See overlap. 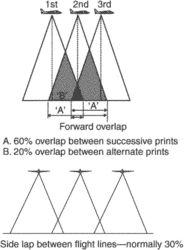 The overlap between photographs in adjacent parallel flight lines. The normal side overlap is 30%. Also called a lateral overlap or a sidelap. See overlap.
An Illustrated Dictionary of Aviation Copyright © 2005 by The McGraw-Hill Companies, Inc. All rights reserved

Feedback
Flashcards & Bookmarks ?
Please log in or register to use Flashcards and Bookmarks. You can also log in with
Flashcards ?
My bookmarks ?
+ Add current page to bookmarks
Mentioned in ?
References in periodicals archive ?
Using 60 percent forward and sidelap, the resulting aerial triangulation solution is extremely strong because each passpoint is measured on as many as nine different photographs."[8]
Constructing GIS base maps from existing data sources