sidereal year, time required for the earth to complete an orbit of the sun relative to the stars. The sidereal year is 365 days, 6 hr, 9 min, 9.5 sec of mean solar time (see solar time). It is 20 min longer than the tropical year because of the precession of the equinoxes; for this reason, the sidereal year does not stay in step with the seasons.
The Columbia Electronic Encyclopedia™ Copyright © 2022, Columbia University Press. Licensed from Columbia University Press. All rights reserved.

The time taken by the Earth to complete one revolution around the Sun with reference to a background star or stellar group, which is regarded as fixed in position. It is thus the interval between two successive passages of the Sun, in its apparent annual motion around the celestial sphere, through a particular point relative to the stars. It is equal to 365.256 36 days and is about 20 minutes longer than the tropical year.
Collins Dictionary of Astronomy © Market House Books Ltd, 2006

A sidereal year is the time it takes Earth to complete an orbit of the Sun relative to the fixed stars. The length of a sidereal year is 365 days 6 hours 9 minutes and 9.54 seconds, which is slightly longer than a solar year.

[sī′dir·ē·əl ′yir]
(astronomy)
The time period relative to the stars of one revolution of the earth around the sun; it is about 365.2564 mean solar days.
McGraw-Hill Dictionary of Scientific & Technical Terms, 6E, Copyright © 2003 by The McGraw-Hill Companies, Inc.

Measurement of the sidereal year.

Left wing down. Nose remains on heading. Flight path to the left of the heading.

The ball of the slip indicator is inside the turn indicating that it is an unbalanced turn. 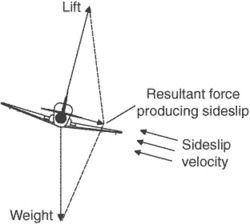 The period of one complete revolution of the earth around the sun with respect to a fixed point, 365 days 6 h 9 min and 9.5534 s in the year 1900, and increasing at a rate of 0.0001 s annually. Because of the precession of the equinoxes, this is about 20 min longer than a tropical year.
An Illustrated Dictionary of Aviation Copyright © 2005 by The McGraw-Hill Companies, Inc. All rights reserved