any of a class of naturally occurring and extremely widespread minerals; any of the naturally occurring chemical compounds with a complex silicon-oxygen radical. Silicates constitute more than 75 percent of the earth’s crust (with quartz, approximately 87 percent) and more than 95 percent of all igneous rocks. The class includes approximately 500 mineral species, among them such important rock-forming minerals as feldspars, pyroxenes, amphiboles, and micas.

Modem classification of silicates. Classification is based on crystallochemical data, which synthesize the results of chemical andX -ray diffraction studies of the structure of silicate minerals.

The basic structural unit of all silicates is the tetrahedral silicon-oxygen radical [SiO4]4-. An important characteristic of silicates is the ability of two or more silicon-oxygen tetrahedrons to combine (polymerization) by means of a common oxygen atom. The nature of this combination becomes a factor in the classification of silicates. In addition, the classification takes into account the composition of radicals (Si, Al, B, Be, Ti, Zr, U), the composition of cations (K, Na, Ca, Mg, Fe, Mn, Al), the presence and character in silicate composition of water or hy-droxyl groups, and the presence of accessory anion groups.

Structure. The five classes of silicates, which are differentiated according to the way in which the silicon-oxygen tetrahedrons are combined, are nesosilicates, cyclosilicates, inosili-cates, phyllosilicates, and tectosilicates. 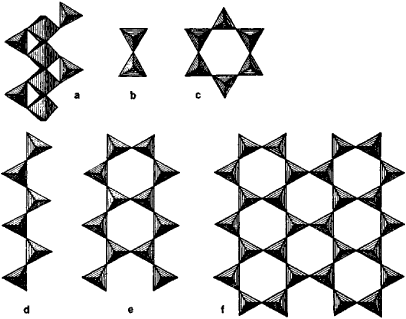 The simplest and most widely distributed inosilicates are composed of continuous chains of silicon-oxygen tetrahedrons, the vertices of which are connected to form [SiO3]2- chains or [Si4O11]6- double chains (Figure l,d and e). Inosilicates include the pyroxene, amphibole, and ramsayite, Na2[Ti2Si2O6]O3, groups.

Phyllosilicates are characterized by continuous sheets of silicon-oxygen tetrahedrons that extend in two directions and form infinite two-dimensional radicals. The formulas of the radicals depend on the spatial arrangement of the silicon-oxygen tetrahedrons in the sheet. The [Si4O10]4- radical (Figure l,f) is typical of sheets composed of hexagonal ring. Here, each of the six silicon atoms of a ring also belongs to two other rings; that is, there are two silicon atoms per ring. Among the phyllosilicates are micas of the muscovite and biotite, K(Mg, Fe2-3)[AlSi3O10]·(OH, F)2, groups, as well as the pyro-phyllite, Al2[Si4O10](OH)2, talc, Mg3[Si4O10]·(OH)2, kaolinite, Al4[Si4O10](OH)8, serpentine, Mg6[Si4O10](OH)8, halloysite, Al4(H2O)4[Si4O10](OH)8, and chlorite groups. Phyllosilicates also include gadolinite, FeY2·[Be2Si2O10]. Among the titanosilicates is astrophyllite, (K, Na)3(Mn, Fe)7[Ti2(Si4Ol2)2]·O2(OH)5, and among the uranosilicates is sklodovskite, (H3O)2Mg [UO2(SiO4)]2·3H2O.

A substantial number of different types of tetrahedron chains, bands, networks, and frameworks have been established in silicate structures.

The composition of the tetrahedral radicals determines whether the silicate is simple, that is, made up of silicon-oxygen [SiO4]4- radicals, or complex. Complex silicates are those containing, in addition to [SiO4]4-, tetrahedral groups of aluminum (aluminosilicates), beryllium (beryllosilicates), boron (borosili-cates), titanium (titanosilicates), zirconium (zirconosilicates), or uranium (uranosilicates). There are also silicates of Al, Be, Ti, and Zr, in which these elements play the role of cations, such as Mg and Fe. Here, the elements combine with silicon-oxygen tetrahedrons not at the vertices but along the ribs or at vertices divided between two tetrahedrons.

The cations forming part of the composition of silicates fall into two groups. Small cations, such as Mg2+, Al3+, Fe2+, Mn2+, and to a certain extent, Ca2+, usually exhibit octahedral coordination (the compounds containing these cations constitute N. V. Belov’s The First Chapter of the Crystal Chemistry of Silicates, 1961). Large cations, which include K+, Na+, Ca2+, Ba2+, Sr2+, and cations of the rare-earth elements, form correspondingly larger coordination polyhedrons. The polyhedrons have eight, nine, or 12 vertices, and the edges are commensurate with the dimensions of [Si2O7]6- groups (these compounds are associated with The Second Chapter of the Crystal Chemistry of Silicates), not of single [SiO4]4- tetrahedrons.

A characteristic feature of silicates is isomorphism, particularly widespread among cations; as a result, series of solutions in silicates, either continuous or within wide substitution limits, are common, as are isomorphic admixtures. Therefore, even expanded silicate formulas, which take into account the main isomorphic substitutions, are still incomplete because of the extreme complexity of true silicate composition. The distribution of isomorphic cations in the silicate structure depends on temperature and can be determined by X-ray diffraction analysis or according to Mössbauer and infrared spectra. This dependence enables silicates to be used as geothermometers.

The silicate structure is characterized by such diverse forms of hydrogen inclusion as hydroxyl groups, water of crystallization, zeolitic water, and interlayer adsorption water. These inclusions are studied by means of nuclear magnetic resonance, thermoanalysis, and infrared spectroscopy. In all silicate classes, there are groups with accessory anions (O2-, F-, CI-, OH-, S2-) and radicals (SO42-, CO32-).

Further complications in silicate structure are associated with such phenomena as substitutional transformation (especially Al═Si in aluminosilicates and Mg═Fe in olivines, pyroxenes, and amphiboles), polytypes, mixed-layer intergrowths (in phyllosilicates), polymorphic transformations (for example, andalusite═disthene═sillimanite), decomposition of solid solutions, and the formation of electron-hole centers.

Properties. The properties of silicates are for the most part determined by the type of silicon-oxygen tetrahedron. Cleavage is imperfect in nesosilicates and cyclosilicates; it is perfect and dependent on the orientation of silicon-oxygen groups in inosilicates, phyllosilicates, and tectosilicates. Hardness is generally 5.5-7, except for phyllosilicates, in which it drops to 1-2; density is approximately 2,500-3,500 kg/m3. The color of most silicates is determined by iron ions: Fe2+ imparts a green color; Fe3+, brown, red, or yellow; and Fe2+ with Fe3+, blue and other colors. However, the characteristic color of individual groups is dependent on Ti3+, V4+, Cr3+, Mn2+, Co2+, Ni2+, and Cu2+ ions and on the combinations of these ions with, for example, iron ions. In certain minerals, color is determined by the electron-hole centers. Color is often associated with microscopic inclusions of colored minerals.

The optical properties of silicates, such as refraction and optical orientation, are of great importance to silicate diagnosis. These properties can be measured using the Fedorov stage or the immersion method.

Origin. The origin of silicates is extremely diverse: they are formed during magma crystallization as well as during metamorphic and metasomatic processes. More rarely, silicates are formed in hydrothermal veins. Large silicate crystals are formed in pegmatites.

The physicochemical characteristics of silicate formation under natural conditions are determined by a paragenetic analysis of mineral associations, taking into account the data obtained from carefully studied phase diagrams of silicate systems. Weathering brings about the destruction of most silicates and is accompanied by the formation of sedimentary rocks, the leaching out of basic compounds, and the liberation of silica, as well as by the emergence of hydrous aluminum silicates from aluminosilicates and the formation of clay minerals, nontronite, gar-nierite, iron oxides, and carbonates.

Silicates (plagioclases, olivine, pyroxenes) are also the principal minerals in lunar rocks and are present in meteorites. It is supposed that olivine and olivine’s more compact modification with a spinel structure constitute nearly all of the earth’s mantle.

Use. Silicates are among the most important minerals. Of special importance are the silicate minerals in lithium and beryllium ores, the ores of dispersed elements, and silicate nickel ores. Nepheline deposits provide complex concentrates for the extraction of aluminum, potash, and soda. Silicates make up a large part of nonmetallic minerals (feldspars, micas, asbestos, talc, zeolites, garnets, bentonite clays, refractory clays) and gems (emerald, aquamarine, topaz, chrysolite, tourmaline).

The study of silicates as the principal minerals of the earth and moon, containing many valuable elements either as basic components or admixtures, is an important trend in modern mineralogy and is closely associated with geochemistry, litholo-gy, and geophysics, as well as with the study of the material composition of mineral deposits.

[′sil·ə·kət]
(inorganic chemistry)
The generic term for a compound that contains silicon, oxygen, and one or more metals, and may contain hydrogen.
(mineralogy)
Any of a large group of minerals whose crystal lattice contains SiO4 tetrahedra, either isolated or joined through one or more of the oxygen atoms.
McGraw-Hill Dictionary of Scientific & Technical Terms, 6E, Copyright © 2003 by The McGraw-Hill Companies, Inc.

An insoluble metal salt; occurs in concrete, cement, brick, glass, clay, and many other materials.
McGraw-Hill Dictionary of Architecture and Construction. Copyright © 2003 by McGraw-Hill Companies, Inc.

a salt or ester of silicic acid, esp one of a large number of usually insoluble salts with polymeric negative ions having a structure formed of tetrahedrons of SiO4 groups linked in rings, chains, sheets, or three dimensional frameworks. Silicates constitute a large proportion of the earth's minerals and are present in cement and glass
Collins Discovery Encyclopedia, 1st edition © HarperCollins Publishers 2005

Feedback
Flashcards & Bookmarks ?
Please log in or register to use Flashcards and Bookmarks. You can also log in with
Flashcards ?
My bookmarks ?
+ Add current page to bookmarks
Mentioned in ?
References in periodicals archive ?
The composition of the poly(sodium acrylate )/sodium silicate hydrogels is shown in Table 2.
Synthesis and Characterization of Cross-Linked Poly(Sodium Acrylate)/Sodium Silicate Hydrogels
"Type I and Type II portland cements comprise both dicalcium and tricalcium silicates," explains CoolCure developer and Silicone Solutions President David Brassard, who is commercializing the admixture through a subsidiary, New Technology Solutions LLC.
Admixture extracts CSH binding value, tempers heat-prone free lime
One of the series of grouting experiments injects cement slurry and another series injects cement-sodium silicate slurry.
Comparative Study of Soil Grouting with Cement Slurry and Cement-Sodium Silicate Slurry
Particle size is assumed to play a role in this case since new silicate cements have been prepared with calcium silicate nanoparticles.
Tricalcium silicate-based cements: properties and modifications
Recently, a variety of calcium silicate based sealers have been introduced, and interest in the single-cone obturation technique using calcium silicate-based sealer has been increased due to improved biocompatibility [8,16,18] and dimensional stability [19] compared with conventional sealers.
Different Setting Conditions Affect Surface Characteristics and Microhardness of Calcium Silicate-Based Sealers
The bands indicating Si functional groups in silicate mineral phases in the original ash appear between 400 and 1200 [cm.sup.-1].
Self-cementing properties and alkali activation of enefit280 solid heat carrier retorting ash
In the present study, three basic powders have been used which are dicalcium silicate ([C.sub.2]S), tricalcium phosphate ([C.sub.3]P) and zinc oxide (ZnO).
[beta]-Dicalcium Silicate Cement Modified with [beta]-tricalcium Phosphate: In vitro Bioactivity and Mechanical Strength
In greenhouse, the effect of potassium silicate application on twospotted spider mite, T.
Effects of potassium silicate application on papaya plants in the twospotted spider mite population/Efeitos da aplicacao de silicato de potassio em plantas de mamoeiro sobre a populacao do acaro-rajado
"Then these silicate materials that were dissolved at the surface would start to separate out and fall back to Earth in what we call a silicate rain," Don Baker, an Earth scientist at McGill University, said in a statement released Friday.
Earth's Crust Material May Have Rained Down From A Steamy Atmosphere
The production market share of liquid sodium silicate in China is analyzed by LSS type.
China Liquid Sodium Silicate (LSS) Market to Grow Substantially, Driven by Rising Awareness of Water Purification
In this experiment, calcium silicate hydrates were prepared with carbide residue and white carbon black.
The Internal Recycle Reactor Enhances Porous Calcium Silicate Hydrates to Recover Phosphorus from Aqueous Solutions
Anatomy and micromorphometric analysis of leaf Catasetum x apolloi Benelli & Grade with addition of potassium silicate under different light sources
Erratum