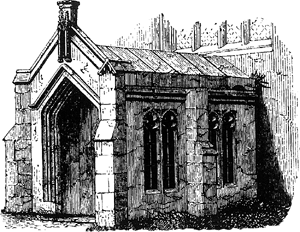 porch
1. An exterior structure that shelters a building entrance.
2. An exterior structure that extends along the outside of a building; usually roofed and generally open-sided, but may also be partially enclosed, screened, or glass-enclosed; it is often an addition to the main structure; also called a veranda, galerie, or piazza; if set within the building structure, it is said to be an integral porch.
3. A small vestibule inside the front door of a 17th-century colonial American house, usually containing a steep stair leading to the loft space above. Also See carriage porch, double-decker porch, double-tiered porch, engaged porch, full-façade porch, full-width porch, gabled porch, inset porch, integral porch, lattice porch, portale, projecting porch, raised porch, shed-roof porch, sleeping porch, storm porch, two-tiered porch, wrap-around porch.
McGraw-Hill Dictionary of Architecture and Construction. Copyright © 2003 by McGraw-Hill Companies, Inc.

Feedback
Flashcards & Bookmarks ?
Please log in or register to use Flashcards and Bookmarks. You can also log in with
Flashcards ?
My bookmarks ?
+ Add current page to bookmarks
Mentioned in ?
References in periodicals archive ?
In summer, when the cabin heats up, the couple heads out to the 150-square-foot sleeping porch (above and opposite, top right).
THE ESCAPE ARTISTS: A REAL ESTATE DEAD-END DROVE A COUPLE TO THE HILLS--AND TO A HISTORIC CABIN
The sleeping porch confirms that the rewards of the working-class pastoral ethos are largely items of bourgeois leisure, and this passage is perhaps more accurately an example of a middle-class pastoral since the Merserve's have by now successfully scaled the social ladder.
The working-class pastoral of Zora Neale Hurston's Seraph on the Suwanee
Natural flooring in the form of slate tiles was also chosen for the sleeping porches and entrances to each home, and no-VOC paints were used throughout the project.
Green homes + green space = green community: New Life Journal's Green Home Experts Board takes a look at Hudson Street's charming and conscious cottages
developer Frederick Engstrum, the 13,290-square-foot gated compound, situated on two acres in the Franklin Village/Los Feliz neighborhood, features mahogany paneling, Batchelder fireplaces, a billiards room, chef's kitchen and numerous terraces, patios and outdoor spaces (replete with trails, ponds and waterfalls), including a sleeping porch with Murphy beds.
Craft corner
A sleeping porch was one of Becki's top priorities during the renovation.
Old Town Allure: A Baton-Rouge-based interior designer joumeys across state lines for relaxing refuge with family and friends
Off the bedroom is a sleeping porch, an architectural feature popular in the early decades of the 20th century.
`Happy woodland' by the sea; Horticulture, history at Blithewold Mansion
The girl's bedroom upstairs opens to another indoor-outdoor jewel: a secret sleeping porch, itself a blend of contemporary styling and Craftsman shingles and beams.
Coastal Craftsman: our Orange County Idea House updates a classic style for modern living
Long a part of cowboy and camping traditions, it achieved architectural expression in the late 19th and early 20th centuries with the rise of the sleeping porch; Sunset published an early story on it in 1915.
Dream time: create an outdoor sleeping platform to take advantage of balmy summer nights. (Home)
Soon to reopen after a renovation, the lodge offers overnight guests their choice among several themed bedrooms and a cozy enclosed sleeping porch, along with home-cooked meals.
Where in Mississippi is ... Osyka? This jewel of a town is a hidden treasure on the state's southwestern border
A third of the rear veranda is enclosed as a sleeping porch. The 10-foot-wide porches extend the living space considerably.
Making a home in the country
A small room in the southeast corner of the house is what Sara calls her "nest." This room that once had four window openings (three remain) was originally a sleeping porch and is now a cozy place of solitude.
The house that touched the sky: a hilltop home in Meridian still bears traces of its first life as a country club
Converting a narrow sleeping porch into an extension of a small bath could have created a tunnel-like room.
Bright and roomy in just 5.5 by 9 feet