stream of ionized hydrogen—protons and electrons—with an 8% component of helium ions and trace amounts of heavier ions that radiates outward from the sun at high speeds. The continuous expansion of the solar coronacorona,
luminous envelope surrounding the sun, outside the chromosphere. Its density is less than one billionth that of the earth's atmosphere. The corona is visible only at the time of totality during a total eclipse of the sun.
..... Click the link for more information.  into the surrounding vacuum of space carries away from the sun about 1 million tons of gas per sec; this blows out like a wind through the solar system. During the days of quiet sunspotsunspots,
dark, usually irregularly shaped spots on the sun's surface that are actually solar magnetic storms. The spots are darker because the temperature of the spots is lower than that of the surrounding photosphere (the visible surface of the sun).
..... Click the link for more information.  activity the wind at the sun has an approximate density of 1 billion atoms per cc and a temperature of about 1 million degrees Fahrenheit. During relatively quiet periods, the wind moves outward from the sun at velocities of 220 to 440 mi (350 to 700 km) per sec (averaging about 1 million mph/1.6 million kph). Near the earth it has a density ranging from 3 to 6 atoms per cc, a velocity of 450 mi (700 km) per sec, and a temperature of about 1,300&degF (700&degC); during periods of greater sunspot activity it shows corresponding increases in density, temperature, and velocity—reaching speeds of 2 million mph (3.2 million kph). The increased velocity is attributed to acceleration caused by magnetic waves spiraling from the sun. The wind is believed to extend out to between 100 and 200 AU (1 AU is the mean distance between the earth and the sun), far beyond Pluto (at 39 AU), where it is dispersed in the interstellar gases. Information from the Voyager space probes about the region known as the heliosheath, where the solar wind is slowed to subsonic speeds and no longer pushes outward, indicates that it is turbulent, marked by a magnetic bubble froth produced by the interaction of the solar wind and the interstellar medium.

Many effects result from the solar wind. The characteristic that a cometcomet
[Gr.,=longhaired], a small celestial body consisting mostly of dust and gases that moves in an elongated elliptical or nearly parabolic orbit around the sun or another star. Comets visible from the earth can be seen for periods ranging from a few days to several months.
..... Click the link for more information.  tail always points away from the sun is explained by the pressure of the wind pushing it out. The intensity of the cosmic rays in the inner part of the solar system is reduced by the magnetic fields carried on the wind, which tend to deflect the rays, thus providing a shield against that radiation. The interaction of the wind with the earth's magnetic field is responsible in part for such phenomena as aurorasaurora borealis
and aurora australis
, luminous display of various forms and colors seen in the night sky. The aurora borealis of the Northern Hemisphere is often called the northern lights, and the aurora australis of the Southern Hemisphere is known as the southern
..... Click the link for more information.  and geomagnetic storms.

The flow of energetic charged particles – mainly protons and electrons – from the solar corona into the interplanetary medium. The thermal energy of the ionized coronal gas is so great that the Sun's gravitational field cannot retain the gas in a confined static atmosphere. Instead, there is a continuous, near-radial, outflow of charged particles into interplanetary space. This highly tenuous plasma carries mass and angular momentum away from the Sun. The expansion is controlled by the Sun's magnetic field. The speed is low in the inner corona but rapidly becomes supersonic and reaches anywhere between 200 and 900 km s–1 at one astronomical unit, i.e. in the vicinity of the Earth's orbit. The density of the plasma decreases with increasing distance from the Sun, and at the Earth's orbit is only about eight particles per cm3.

Two forms of the solar wind are readily recognizable: a slow-moving low-density flux (< 400 km s–1), and high-speed streams. The latter are thought to form the normal state and originate in areas of relatively weak divergent (and therefore primarily unipolar) magnetic field. The emission is greatly increased over coronal holes and the long-term stability of such regions may cause recurrent enhancement over several solar rotations. Similar long-lived jets are apparently emitted from the polar regions. Confinement by magnetic fields in the corona results in the slow-moving flow, and this is greatest around the maximum of the sunspot cycle. In addition, transient mass ejections occur during flares and in some of the more frequent but less energetic active filaments/prominences (see coronal transients).

The Sun's magnetic field is transported by the expanding plasma and becomes the interplanetary magnetic field, the lines of which are wound into spirals by the Sun's rotation (see magnetohydrodynamics). The region of expanding solar wind, or heliosphere, is bounded (at roughly 100–200 AU) by the heliopause.

In essence the solar wind is the continuously expanding solar corona. The pressure of the heated gas causes a steady hydrody-namic outflow of the corona with a gradually increasing speed. At the base of the corona (—10,000 km from the surface of the sun), the particles have a radial velocity of the order of hundreds of meters per second; at a distance of a few radii from the sun, the speed reaches the speed of sound in the plasma (100–150 km/sec); and at a distance of 1 astronomical unit (at the earth’s orbit), the speed of the protons in the plasma is 300–750 km/sec. Near the earth’s orbit the solar-wind plasma temperature, as determined from the thermal component of the particle velocities (from the difference between the particle velocities and the average flow velocity), is ~104°K in quiet periods of the sun and can be as high as 4 × 105°K in active periods. The solar wind contains the same particles as the solar corona, that is, primarily protons, electrons, and helium nuclei (from 2 to 20 percent).

Depending on the state of solar activity, the proton flux near the earth’s orbit ranges from 5 x 107 to 5 x 108 protons/cm2-sec, and the proton density ranges from a few particles to several tens of particles per cubic centimeter. It has been established by means of interplanetary space probes that, up to Jupiter’s orbit, the particle flux density in the solar wind is inversely proportional to the square of the distance from the sun. The energy carried into interplanetary space each second by the solar-wind particles is estimated at 1027-1029 ergs; it may be noted that the energy of the sun’s electromagnetic radiation is ~4 × 1033 ergs/sec. The amount of mass lost by the sun to the solar wind in a year is ~2 × 10~14of the mass of the sun.

The solar wind carries away loops of lines of force of the solar magnetic field, since the lines of force are “frozen in” the outflowing coronal plasma (seeMAGNETOHYDRODYNAMICS). The combination of the sun’s rotation with the radial motion of the solar-wind particles gives the lines of force a spiral shape. At the earth’s orbit the magnetic field strength of the solar wind ranges from 2.5 × 10–6 to 4 × 1(H oersted. In the plane of the ecliptic the field has a sector structure; in each sector the field is directed either away from or toward the sun (Figure 1). In 1963 and 1964, a period of low solar activity, four sectors were observed that lasted 1½ years. As the activity increased, the field structure became more dynamic, and the number of sectors increased. Figure 1. Sector structure of the interplanetary magnetic field, as found by the American satellite IMP I 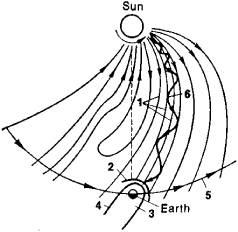 Since the sun is a more or less ordinary star, it is natural to assume that other stars also have an outflow of matter like the solar wind. Stellar winds more powerful than the solar wind have been found, for example, for hot stars with a surface temperature of ~30,000°-50,000°K.

The term “solar wind” was proposed in 1958 by the American physicist E. Parker, who worked out the foundations of the hy-drodynamic theory of the solar wind.

[′sō·lər ′wind]
(geophysics)
The supersonic flow of gas, composed of ionized hydrogen and helium, which continuously flows from the sun out through the solar system with velocities of 180 to 600 miles (300 to 1000 kilometers) per second; it carries magnetic fields from the sun.
McGraw-Hill Dictionary of Scientific & Technical Terms, 6E, Copyright © 2003 by The McGraw-Hill Companies, Inc.

Feedback
Flashcards & Bookmarks ?
Please log in or register to use Flashcards and Bookmarks. You can also log in with
Flashcards ?
My bookmarks ?
+ Add current page to bookmarks
Mentioned in ?
References in periodicals archive ?
Currently, Earth's space agencies study solar winds through the data collected by spacecraft that are directly embedded in them.
NASA Targeting Sun In New Mission To Study Solar Winds
It's possible that meteor impacts initiate the necessary chemical reactions, but many scientists believe that the solar wind is the primary driver.
Ingredients for Water Could Be Made on Surface of Moon, A Chemical Factory
The data revealed that electrons within the solar wind that encounter the bow shock temporarily accelerate to an extremely high speed, causing the electron stream to destabilize and break down after just 90 milliseconds.
STUDY LOOKS AT MECHANISM THAT SLOWS SOLAR WIND
* The Wide-field Imager for Solar Probe Plus, which will make three-dimensional images of the solar wind.
Parker Heads To The Sun
"This mission will be our front-line warning system to save our satellites from solar winds and its effect.
Nasa solar probe crucial in UAE's space missions
The Solar Probe Plus, set to launch in July 2018, will dive into the Sun's atmosphere nearly 6.5 million km from the surface--that's within Mercury's orbit--to investigate what drives solar winds. These are clouds of highly charged particles released from the Sun's outer atmosphere--the corona.
How do you plunge a craft into the Sun?
The space weather observations allow researchers to watch how the behaviour of the Sun and the solar wind-an unbroken supersonic flow of charged particles from the sun-changes over time and how the Earth's magnetic field responds to solar wind variations.
New findings to boost space weather forecast
Outside the heliosphere lies the interstellar medium, with plasma that has different speed, density, and temperature than solar wind plasma, as well as neutral gases.
NASA's IBEX observations pin down interstellar magnetic field
Venus's only protection from the solar wind is the charged outer layer of its atmosphere called the ionosphere.
Venus being bombarded by planet-sized space weather explosions
Remote-sensing observations of the solar wind have been conducted for more than 3 decades at the Solar-Terrestrial Environment Laboratory (STEL) of Nagoya University, using the interplanetary scintillation (IPS) method.
Three-dimensional exploration of the solar wind using observations of interplanetary scintillation
The solar wind rushes outwards from the raging inferno that is our Sun, but from then on the wind should only get cooler as it expands beyond our solar system since there are no particle collisions to dissipate energy.
-WARWICK -Magnetic Turbulence Trumps Collisions to Heat Solar Wind