1. a low-ranking member of the Mafia or other organized crime ring
2. Zoology
a. an individual in a colony of social insects, esp ants, that has powerful jaws adapted for defending the colony, crushing large food particles, etc.
b. (as modifier): soldier ant
Collins Discovery Encyclopedia, 1st edition © HarperCollins Publishers 2005

a serving member of an army. In its original sense the term meant a ‘hired man’, reflecting the fact that in premodern states, with some exceptions (e.g. Roman), rather than being conscripted to a citizen army, soldiers were recruited to the personal service of rulers or warlords on a more ad hoc basis. Compare STANDING ARMY.
Collins Dictionary of Sociology, 3rd ed. © HarperCollins Publishers 2000
The following article is from The Great Soviet Encyclopedia (1979). It might be outdated or ideologically biased.

(2) In the broad sense, a warrior, a military man, or a military veteran.

(3) In the figurative sense, a person who has devoted himself to a cause, for example, a soldier of the revolution.

The term “soldier” originally meant a mercenary warrior who was paid for his service; it appeared in Italy in the 15th century and later gained currency in Western Europe. In Russia, the term (soldat) appeared in the 17th century with the formation of infantry regiments of the new order, modeled on Western European armies. In the regular Russian Army beginning in the 18th century, a recruit received the rank of soldier after a specified time of service. Serfs conscripted under the system of compulsory service recruitment (18th and first half of the 19th century) were emancipated and passed into the soldiers’ estate (soldatskoe soslovie), which included the soldiers’ wives and children.

After the abolition of serfdom in 1861 and the introduction of the compulsory military service system in 1874, the soldiers’ estate ceased to exist, and personnel of the lower ranks—from private to acting officer—were no longer officially called soldiers; the term “soldier” was retained only in the expression “new soldier” (molodoi soldat) to designate recruits who had not yet completed the program of basic training.

After the February Revolution of 1917, the designation “lower rank” was replaced with the rank of soldier in accord with the March 5 order of the military authority. Withthe formation of the Red Army, low-ranking enlisted men were given the rank of krasnoarmeets (“Red Army soldier”) beginning in January 1918. In July 1946 the category of soldier, which included the ranks of private and private first class, was introduced in the Soviet armed forces (seeMILITARY RANKS). 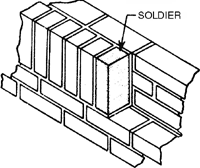 soldier, 1
1. A brick that is laid on end, i.e., positioned vertically with its narrower face showing on the wall surface; compare with sailor.
2. Same as soldier pile.

1. In excavation work, a vertical member which takes the side thrust from horizontal sheeting or from walings and which is supported by struts across the excavation.
2. A vertical member used to prevent the movement of formwork; is held in place by struts, bolts, or wires.
McGraw-Hill Dictionary of Architecture and Construction. Copyright © 2003 by McGraw-Hill Companies, Inc.

Feedback
Flashcards & Bookmarks ?
Please log in or register to use Flashcards and Bookmarks. You can also log in with
Flashcards ?
My bookmarks ?
+ Add current page to bookmarks
Mentioned in ?
References in classic literature ?
Now, instead of a common soldier he had become a noble lord, and the people told him about all the grand doings of the town and the King, and what a beautiful Princess his daughter was.
No one except the King may go in or out, for it is prophesied that she will marry a common soldier, and the King cannot submit to that.'
View in context
However, the tall soldier seemed suddenly to forget all those fears.
Turning he saw that it belonged to the tattered soldier. "Ye 'd better take 'im outa th' road, pardner.
View in context
You'd look fine," said a corporal, chaffing a thin little soldier who bent under the weight of his knapsack.
Each time Prince Nesvitski tried to move on, soldiers and carts pushed him back again and pressed him against the railings, and all he could do was to smile.
View in context
When they came to the stairs, the soldier ran on before the princesses, and laid himself down; and as the twelve sisters slowly came up very much tired, they heard him snoring in his bed; so they said, 'Now all is quite safe'; then they undressed themselves, put away their fine clothes, pulled off their shoes, and went to bed.
Then the king called for the princesses, and asked them whether what the soldier said was true: and when they saw that they were discovered, and that it was of no use to deny what had happened, they confessed it all.
View in context
"I expected this blow" said the Soldier, sulkily; "but I can bear it.
"But, for my part, not being a soldier, I am fond of danger.
View in context
When the people saw the officer and beheld the threatening attitude with which the soldiers fronted them, their rage became almost uncontrollable.
View in context
"I cannot bear it!" said the pewter soldier. "I have shed pewter tears!
View in context