in psychology: see defense mechanismdefense mechanism,
in psychoanalysis, any of a variety of unconscious personality reactions which the ego uses to protect the conscious mind from threatening feelings and perceptions.
..... Click the link for more information. .
The Columbia Electronic Encyclopedia™ Copyright © 2013, Columbia University Press. Licensed from Columbia University Press. All rights reserved. www.cc.columbia.edu/cu/cup/

Any component, member, or part that juts out from a building; in masonry construction, stones or bricks that are set forward off the general wall surface to provide a rugged or rustic appearance.

In the described type of projection, which is called a central projection, an important role is played by the choice of the center of projection S. A number of difficulties arise when points of a given plane Π are projected on the plane Π′ as in Figure 2. Π contains points that have no image in Π′. Such is the case for the point B when the projection line SB is parallel to Π′. To eliminate this difficulty, which is due to the properties of Euclidean space, elements at infinity, also called ideal elements, are 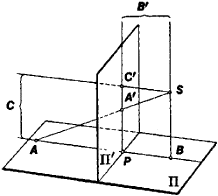 added to the space. In other words, the parallel lines BS and PA′ are assumed to intersect at a point at infinity B′. This point may then be considered as the image of the point B in Π′. Similarly, the point at infinity C is the preimage of the point C (see Figure 2). Thus, one-to-one correspondence defined by means of central projection can be established between the points of Π and the points of IT by introducing elements at infinity. Such a correspondence is called a perspective collineation.

The special type of parallel projection in which the plane Π is perpendicular to the direction of projection is widely used in drawing. Such a projection is called orthogonal. 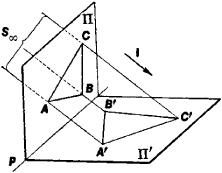 Central and parallel—in particular, orthogonal—projections are widely used in descriptive geometry, and such different types of images as perspective images and axonometric images are obtained. Special types of projections on a plane, a sphere, or other surfaces are used in, for example, geography, astronomy, crystallography, and topography. Thus, cartographic projections include such types as gnomonic and stereographic projections.

in psychology, the perception of one’s own mental processes as those of an external object, resulting from the unconscious transfer of internal impulses and feelings to that object. Projection plays an important role in the formation of the psyche in early childhood, when a child cannot clearly differentiate between himself and the external world. It is also the basis of archaic and anthropomorphic ideas about the world that characterize the early stages of development of human consciousness.

The onset of a number of mental diseases (paranoia, phobia, mania) is associated with pathological forms of projection. In these cases, perception of the external world is severely distorted, while the illusion of control over one’s own behavior is preserved. The mechanism of projection is used diagnostically in projective tests, such as the Rorschach test, to detect hidden motivations and stimuli.

Although many aspects of the personality theory formulated by Sigmund Freud have been rejected by contemporary analysts, Freud was nevertheless responsible for a significant number of insights into human nature that have been generally accepted. Among these insights are the Freudian “defense mechanisms,” one of which is projection. In projection, a certain urge we are repressing is projected onto another person or group of people. A familiar example is the sexually repressed person who perceives other groups of people (e.g., racial minorities) as being obsessed by sex, whereas in actuality it is the repressed individual who is obsessed by sex. A roughly similar process takes place in dreams.

According to Freud, dreams provide an avenue for the expression of normally repressed desires while simultaneously disguising and censoring our real urges. In this view, the purpose of dreams is to allow us to satisfy in fantasies the instinctual urges that society judges to be unacceptable, such as the urge to go to bed with every attractive member of the opposite sex. If, however, we were to dream about actually having intercourse, the emotions evoked by the dream would wake us up. So that our sleep is not continually disturbed by such dreams, the mind modifies and disguises the content of our dreams so that strong emotions are not evoked. For example, if a man is attracted to someone who is unavailable for sexual relations, he might dream about taking a train ride through a tunnel while seated next to the woman.

[prə′jek·shən]
(mapping)
A system for presenting on a plane surface the spherical surface of the earth or the celestial sphere; some of these systems are conic, cylindrical, gnomonic, Mercator, orthographic, and stereographic. Also known as map projection.
(mathematics)
The continuous map for a fiber bundle.
Geometrically, the image of a geometric object or vector superimposed on some other.
A linear map P from a linear space to itself such that P ° P is equal to P.
(psychology)
Ascribing one's motives to someone else to disguise a source of conflict in oneself.
McGraw-Hill Dictionary of Scientific & Technical Terms, 6E, Copyright © 2003 by The McGraw-Hill Companies, Inc.

1. In masonry, stones which are set forward of the general wall surface to provide a rugged or rustic appearance.
2. Any component, member, or part which juts out from a building.
McGraw-Hill Dictionary of Architecture and Construction. Copyright © 2003 by McGraw-Hill Companies, Inc.

In cartography, any systematic arrangement of parallels and meridians portraying a quasispherical planetary surface on a plane of a map. See Mercator map projection, Lambert conformal conic map projection, and international modified polyconic projection.
An Illustrated Dictionary of Aviation Copyright © 2005 by The McGraw-Hill Companies, Inc. All rights reserved

1. the representation of a line, figure, or solid on a given plane as it would be seen from a particular direction or in accordance with an accepted set of rules
2.
a. the process of showing film on a screen
b. the image or images shown
3. Psychol
a. the belief, esp in children, that others share one's subjective mental life
b. the process of projecting one's own hidden desires and impulses
4. the mixing by alchemists of powdered philosopher's stone with molten base metals in order to transmute them into gold
Collins Discovery Encyclopedia, 1st edition © HarperCollins Publishers 2005

A device that projects TV onto a white or silver fabric screen that is wall, ceiling or tripod mounted. It uses the same types of technologies as data projectors, which accept computer output, but projection TVs are designed to process standard and high-definition TV signals. Many units can do both.

Front-projection TVs are used in home theaters, and high-end units can display an excellent image on 8-foot and 10-foot screens. When built into the room, the screen may be fixed on the wall or dropped from the ceiling by remote control. The projector is either ceiling hung or mounted high up on the opposite wall. For projection technologies (CRT, LCD, etc.), see rear-projection TV. See data projector.

Front Projection Screen Size Can Be Changed
Front-projection TVs can change their screen size by replacing the screen and moving the unit closer or farther away. In contrast, screens in rear-projection units are fixed in size.

(1) The primary component (the screen) in an LCD monitor or TV. The term panel is widely used in the LCD manufacturing industry. See LCD.

(3) An earlier type of data projection system that required an overhead projector. Also called a "projection panel," it accepted output from the computer and displayed it on a transparent LCD screen placed on top of the projector. See data projector.

An earlier large-screen TV set that has employed one of several technologies for generating the image. Rear-projection TVs (RPTVs) were developed to extend the size of a TV screen beyond the CRT TV, which for all practical purposes maxed out at 36". Introduced in the 1970s and very popular throughout the 1980s and 1990s, at the end of 2012, Mitsubishi, the only remaining vendor of RPTVs, ceased production of its DLP-based 82" and 92" sets (for a novel rear-projection device, see SPUD).

Although RPTVs were still bulky, no CRT TV could have been built with as large a screen. Using mirrors and lenses, the projected image was flipped up and over rather than straight toward the screen.

The Largest Screen for the Money
Early rear-projection systems suffered from a narrow viewing angle. Because the screen itself was a lens, standing up or walking off to the side dramatically changed the brightness. Although newer sets had wider viewing angles and were the only large-screen TVs available for many years, they were nowhere near as visually dazzling as the flat TVs that followed. See viewing angle.

Rear vs. Front Projection
RPTVs were a fixed size, whereas front projectors can change their screen dimension by changing the external screen and repositioning the unit (see front-projection TV). See microdisplay, plasma, LCD and video/TV history.