shock waveshock wave,
wave formed of a zone of extremely high pressure within a fluid, especially the atmosphere, that propagates through the fluid at a speed in excess of the speed of sound.
..... Click the link for more information.  produced by an object moving through the air at supersonic speed, i.e., faster than the speed of sound. Since sound is a mechanical disturbance that propagates through the air, there is a limit to its speed. An object such as an airplane, moving through the air, generates sound. When the speed of the object reaches or exceeds the speed of sound, the object catches up with its own noise; at higher speeds, it forces the sound ahead of itself faster than the noise would ordinarily travel. The piled-up sound takes the form of a violent shock wave called a sonic boom propagating behind the object. Sonic booms occasionally have mechanically destructive effects in addition to their role as noise pollutants.
The Columbia Electronic Encyclopedia™ Copyright © 2013, Columbia University Press. Licensed from Columbia University Press. All rights reserved. www.cc.columbia.edu/cu/cup/

An audible sound wave generated by an object that moves faster than the speed of sound (supersonic object). The sonic boom forms because the air is pushed away faster than the air molecules can move. The displaced air becomes highly compressed and creates a very strong sound wave, referred to as a compressional head shock or bow shock. At the back of the supersonic object the air has to fill the void left as the object moves forward; in this case, the gas becomes rarefied and a rarefractional tail shock develops. These shock waves are the main components of a sonic boom, and they are generated the entire time that an object flies faster than the speed of sound, not just when it breaks the sonic barrier. See Shock wave

Sonic booms may be natural or generated by human activity. A natural sonic boom is thunder, created when lightning ionizes air, which expands supersonically. Meteors can create sonic booms if they enter the atmosphere at supersonic speeds. Human sources of sonic booms include aircraft, rockets, the space shuttle during reentry, and bullets.

Sonic booms are commonly associated with supersonic aircraft. The shock waves associated with sonic booms propagate away from the aircraft in a unique fashion. These waves form a cone, called the Mach cone, that is dragged behind the aircraft. The illustration shows the outline of the Mach cone generated by an F-18 fighter aircraft flying at Mach 1.4. The schlieren photographic technique was used to display the sonic boom, which is normally invisible. The half-angle of the cone is determined solely by the Mach number of the aircraft, Θ = arctan (1/M), 36° for M = 1.4. The shock waves travel along rays that are perpendicular to the Mach cone (see illustration). As the Mach number increases, Θ becomes smaller and the sound travels almost directly downward. See Mach number, Schlieren photography 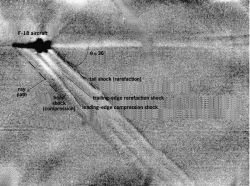 The typical peak pressure amplitude (or overpressure) of a sonic boom on the ground is about 50–100 pascals. A sonic boom with 50 Pa (1 lbf/ft2 or 0.007 psi) overpressure will produce no damage to buildings. Booms in the range of 75–100 Pa are considered disturbing by some people. Occasionally there is minor damage to buildings from sonic booms in the range of 100–250 Pa; however, buildings in good condition will be undamaged by overpressures up to 550 Pa. Very low flying aircraft (30 m or 100 ft) can produce sonic booms of 1000–7000 Pa. These pressures are still about five times less than that needed to injure the human ear, but can lead to damage to buildings, such as the breaking of glass windows and the cracking of plaster. Although sonic booms are not dangerous, they can evoke a strong startle response in people and animals.

[′sän·ik ′büm]
(acoustics)
A noise caused by a shock wave that emanates from an aircraft or other object traveling at or above sonic velocity.
McGraw-Hill Dictionary of Scientific & Technical Terms, 6E, Copyright © 2003 by The McGraw-Hill Companies, Inc. The bangs heard when shock waves generated by a transonic or supersonic aircraft strike the ears of an observer on the ground. When an aircraft is flying at a speed faster than the speed of sound, shock waves form on the aircraft. These shock waves radiate out from the aircraft in the form of a cone. When the cone passes over the ground, the pressure difference between the pressure inside the shock wave and the pressure of the surrounding air causes the explosion-like sound.
An Illustrated Dictionary of Aviation Copyright © 2005 by The McGraw-Hill Companies, Inc. All rights reserved

Feedback
Flashcards & Bookmarks ?
Please log in or register to use Flashcards and Bookmarks. You can also log in with
Flashcards ?
My bookmarks ?
+ Add current page to bookmarks
Mentioned in ?
References in periodicals archive ?
I heard the sonic boom few years ago and it wasn't the same as that."
Could a secret spy jet be the explosive Could a secret spy jet truth behind mystery booms? Series of thunderous noises heard over Coventry and Warwickshire excites conspiracy theorists..
Well, according to information provided by the FFA the sonic boom in Seattle was produced by two fighter jets dispatched from Portland after it was discovered a small airplane had trespassed the presidential airspace (within 8 miles of Air Force One)
Fighter jets produce Sonic Boom in Seattle
A SERIES of massive sonic booms caused by a Eurofighter Typhoon warplane sparked an earthquake scare in Anglesey yesterday.
WALES: IS THAT AN EARTHQUAKE ON ANGLESEY? Oh no, it's just a Eurofighter breaking sound
Why does Superman create a sonic boom when he flies, but most airplanes do not?
Superman's secrets exposed: how does Superman get all his powers? One physicist tells all
The UN has confirmed the majority of patients seen at its clinics as a result of sonic booms were under 16 years old and suffering from symptoms including temporary loss of hearing, anxiety attacks, muscle spasms and bedwetting.
Ten years on ..
Northrop Grumman's Integrated Systems sector, in co-operation with the Defense Advanced Research Projects Agency (Darpa) and Nasa, recently demonstrated the flight of a fighter with a fuselage design that reduces the impact of sonic booms. A flight conducted in August showed that by modifying an aircraft's shape the intensity of the sonic boom can be greatly reduced.
Quite please, Sonic Boom in progress
"When are we going to hear the sonic boom?" Evelyn Husband (left) asked as she waited in Florida for the space shuttle Columbia to return with her astronaut husband, Rick.
"When are we going to hear the sonic boom?" Evelyn Husband asked as she waited in Florida for the space shuttle Columbia. (Post People)
Increasing the velocity into the transonic range -- say 40 fps under the speed of sound -- it begins to make more sound as it passes through the air As it "breaks" or passes the sound barrier, it creates a sonic boom just as an aircraft does and continues to make it as long as its velocity is above the speed of sound.
Magic sub-sonic ammo? (Handgun Hunting)
Could we fully appreciate a glorious pop music masterpiece like Donna Summer's "Last Dance" without the bellowing sonic boom of something like, well, The Ethel Merman Disco Album?
Disco wrecking ball: who recorded Ethel Merman with a disco beat? Could it be ... Satan?
This sonic boom can shatter windows and fray nerves.
Surviving a weak economy: coming out stronger through integrated cost reduction. (Techtrends from Deloitte & Touche)
The 20-year-old, from Bermondsey, in South London, entered the Big Brother 3 house like a sonic boom and already its online team are struggling to cope with her loud and constant chatter.
Chatterbox Jade must go.. official
Within one or two minutes a powerful sonic boom, or pair of booms, rattled buildings as far as 150 kilometers (nearly 100 miles) from the meteor's flight path.
Canadian daylight fireball