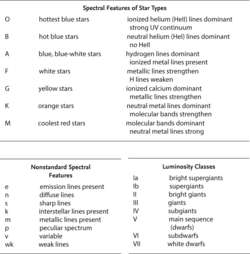 (spectral classes) The different groups into which stars may be classified according to the characteristics of their spectra, principally the absorption lines and bands resulting from the presence of particular atoms and molecules in the star. Spectral lines of the various elements and compounds have widely different strengths in stars of different temperatures: this is the basis of the current classification. In the Secchi classification made in the 1860s by the Italian Angelo Secchi, stars were divided into four groups based on the visual observation of spectra. The subsequent development of photographic spectroscopy allowed a much more precise division. The Harvard classification was introduced by astronomers at Harvard Observatory in the 1890s and used in subsequent volumes of the Henry Draper Catalog. It was developed into its present form in the 1920s by E.C. Pickering, Annie J. Cannon, and others.

The original scheme was based on the strength of the hydrogen Balmer absorption lines in stellar spectra (see hydrogen spectrum), the order being alphabetical from A to P: A stars had the strongest hydrogen lines. Some letters were later dropped and the ordering rearranged to correspond to a sequence of decreasing surface temperature. The majority of stars can be divided into seven spectral types – O, B, A, F, G, K, M – the order often remembered by the mnemonic ‘Oh Be A Fine Girl (or Guy) Kiss Me’. The principal spectral features of these classes are shown on the graph (above) and listed in Table (facing) and also at separate entries: O stars, B stars, etc. Since temperature and color are directly linked the Harvard classification is also a sequence of colors ranging from hot blue O stars to cool red M stars. Additional classes are the carbon stars (C stars) and the S stars. The spectral types are further subdivided into 10 subclasses denoted by digits 0 to 9 placed after the spectral type letter, as with A5 – midway between A0 and F0. These subdivisions are based on a variety of complex empirical criteria, mainly the ratios of certain sets of lines in a spectrum, and may be further subdivided, as with O9.5. Other spectral characteristics, such as the presence of emission lines, are indicated by an additional small letter placed after the spectral type, as with M5e.

It was realized in the 1890s that stars of a particular spectral type could have widely differing luminosities and several luminosity classifications were developed. The currently used MK system was first published in 1941 by W.W. Morgan and P.C. Keenan of Yerkes Observatory: stars of a given spectral type are further classified into one of six luminosity classes, denoted by Roman numerals placed after the spectral type, as with G2 V, and indicating whether the star is a supergiant, giant, subgiant, or main-sequence star; subdwarfs and white dwarfs are also sometimes considered as luminosity classes. All these classes occupy distinct positions on the Hertzsprung–Russell diagram. Stars of a similar temperature but different luminosities must differ in surface area and consequently in surface gravity and atmospheric density. These differences produce spectral effects that are used to differentiate between the luminosity classes. A major effect is the pressure broadening of spectral lines, which increases as the atmospheric density and pressure increase (and radius decreases): spectral lines of a bright supergiant are much narrower than those of a main-sequence star of the same spectral type. The spectra of a set of standard stars are used in assigning spectral type and luminosity class to a star.

Feedback
Flashcards & Bookmarks ?
Please log in or register to use Flashcards and Bookmarks. You can also log in with
Flashcards ?
My bookmarks ?
+ Add current page to bookmarks
Mentioned in ?
References in periodicals archive ?
Some of their features allow us to evaluate changes in the star's fundamental parameters compared to those at the visual minimum (spectral type B1, [T.sub.eff] = 22000 [+ or -] 5000 K, log L/[L.sub.[dot encircle]] = 5.5 [+ or -] 0.2, [3]).
Confirmation of the luminous blue variable status of MWC 930
The V-Rc colour index of 0.326 as measured by TB, as well as that of 0.315 derived from 2MASS (see remarks about Table 2, above) indicate a blended spectral type of around F2 and temperature ~7000 K.
CU Hydrae--a neglected bright eclipsing binary star
Our attempt to measure simultaneously data from the 1st and 2nd grating orders will work for certain spectral types. Scanners took typically 6-9 standards/night and required about 10 minutes for each scan.
Stellar astrophysics with undergraduate students
The second half of the report deals with the progress that has already been made towards the resolution of the problem of calibration, particularly the studies aimed at obtaining an initial list of normal stars with reliable spectral type and good visible photometry and that have a high density on the sky.
Mid-Infrared spectrophotometric calibration for the new generation of large telescopes: A solution to the problem of calibrating data reliably
All this information enabled astronomers to link the stars' distances with their apparent brightnesses to calculate their intrinsic brightnesses, and also measure their surface temperatures (or, at least, their spectral types).
The H-R diagram's 100th anniversary: this year we celebrate the centennial of one of astronomy's cornerstone achievements
All these values suggest a spectral type near F0 if the star is unreddened, however, to give the observed V magnitude a main sequence star of this spectral type would lie at a distance of some 1500 parsecs.
VSX J003909.7+611233: a new slowly pulsating B (SPB) star in Cassiopeia?
Other articles survey the current state of research in topics that include astrobiology, sungrazing comets, digital image reconstruction, new spectral types L and T, high-velocity white dwarfs and galactic structure, standard photometric systems, mega-masers and galaxies, and galactic winds.
Annual Review of Astronomy and Astrophysics; v.43, 2005
Moreover, there are a hundred or more spectral types of pigment with distinct peaks to chose from.
Visual pigment types and quantum-catch ratios: implications from three marine teleosts
Five of the sky's 20 brightest stars have spectral types between B0 and B3--hotter than Rigel or Regulus.
Northern hemisphere's sky: Splendid Spica: there's more than meets the eye to Virgo's sole bright star
It's a nearby double orange dwarf, magnitudes 4.2 and 6.2, spectral types K0V and K4V, current separation 6.1".
The nearest star for northerners: Barnard's star is the closest known thing to the solar system after Alpha Centauri
Through my 105-mm refractor at 122x, I see Izar's snug primary and secondary as gold and white, respectively, which matches their spectral types of K0 and A0.
The first plowman: Bootes is home to one globular cluster and many great galaxies
Typically, stars with later spectral types (those redder than the Sun) are relatively brighter at NIR wavelengths than earlier (bluish and white) stars.
The ONAG from innovations foresight: the digital revolution (and the ONAG) gives us a new way to guide our astrophotos