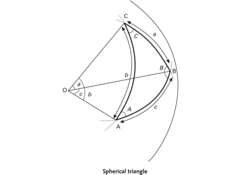 A triangle on the surface of a sphere formed by the intersections of three great circles (see illustration). The arcs BC, AC, and AB form the sides of the spherical triangle ABC. The lengths of these sides (a , b , and c ), in angular measure, are equal to the angles BOC, COA, and AOB, respectively, where O is the center of the sphere. This assumes a radius of unity. The angles between the planes are the spherical angles A, B, and C of the triangle.

The relationships between the angles and sides of spherical triangles are extensively used in astrometry. The three basic relationships are the sine formula:

For a spherical right-angled triangle, in which one angle, say C, is equal to 90° so that sin C = 1, cos C = 0, the formulae are much simplified. They are also simplified if the sides of the triangle are small so that, say, sin a tends to a and cos a to 1–a 2/2. As a , b , and c approach zero the formulae reduce to those used in plane geometry. The formulae may be extended by replacing the sides and angles by the supplements of the corresponding angles and sides, respectively. Thus

sin A = sin a, cos A = –cos a
Collins Dictionary of Astronomy © Market House Books Ltd, 2006
The following article is from The Great Soviet Encyclopedia (1979). It might be outdated or ideologically biased.

a geometric figure formed by arcs of three great circles connecting any three points on a sphere in pairs.

[′sfir·ə·kəl ′trī‚aŋ·gəl]
(mathematics)
A three-sided surface on a sphere the sides of which are arcs of great circles.
McGraw-Hill Dictionary of Scientific & Technical Terms, 6E, Copyright © 2003 by The McGraw-Hill Companies, Inc.