see spinningspinning,
the drawing out, twisting, and winding of fibers into a continuous thread or yarn. From antiquity until the Industrial Revolution, spinning was a household industry. The roughly carded fiber was at first held in one hand and drawn out and twisted by the other hand.
..... Click the link for more information. .

A turned-wood architectural element, produced on a lathe, and used as a banister or ornamental spindlework on porches and other locations.

the principal operating member of slubbing, spinning, and twisting machines in textile production. The spindle serves to twist the product of the spinning and to wind it (slubbing, yarn, cord, and so on) onto a reel, spool holder, or bobbin.

The hand spindle appeared in countries of the ancient Orient. Machines with spindles came into use in the second half of the 18th century. A distinction is made between spindles for natural fibers (cotton, wool, or linen) and chemical fibers. A spindle is a long, relatively thin, and flexible steel shaft of complex geometric form. It has two bearings, which as a rule are located on its lower part—roller and ball bearings and sliding step bearings. The upper part of the spindle is equipped with a cap whose configuration is determined by the form of packaging of the product.

The majority of spindles are rotated by a flexible transmission (a belt or strap); some are driven by helical wheels. The spindle for spinning chemical fibers rotates by means of an individual, high-frequency electric motor whose rotor is seated on the spindle. Braking of the spindle, which is necessary to remove a worked bobbin or to fix a break in the yarn, is accomplished by special brakes (mechanical drive) or by countercurrent (electrical drive). Spindles are usually attached to the beam of a machine by means of special nuts, gaskets, and springs; some spindles can be turned around by means of special arms. All modern spindles have a damper device, which decreases shaft vibration during rotation. The frequency of rotation of spindles varies in processing various fibers from 2,500 to 16,000 or more rpm.

A serial spindle for spinning natural fibers is shown in Figure 1. A paper holder or wooden spool is fitted tightly on the upper part of the shaft; the yarn winds onto it in the form of a cop. On the way to the spindle, the thread passes over a runner that slides along an immovable ring around the spindle. When the spindle rotates, the yarn is pulled and causes the runner to move along the ring, thus twisting the yarn and winding it onto the holder.

Soviet specialists have developed an original spindle for spinning-twisting machines, which has made it possible to combine spinning, slubbing, roving, twisting, and winding of two threads (Figure 2). The hollow shaft of the spinning-twisting spindle rotates on two ball bearings enclosed in rubber rings. The rings are enclosed in a housing consisting of two halves. The holder for the yarn taken from the spinning machine is seated on the upper end of the spindle; the lower end of the yarn goes through an opening in the shaft. The strand of yarn enters the interior canal of the spindle from the drawing instrument. When the spindle rotates, the yarn from the holder runs along the flange of the shaft canal and causes the strand to rotate around its axis, converting it into yarn. Throwing occurs at the top of the spindle; on the way from the top of the spindle to the winding reels two threads of yarn are twisted in reverse direction, and then the thread is wound on a bobbin.

An electric spindle for the formation—sometimes incorrectly called spinning—of viscose fibers is shown in Figure 3. The rotor of a three-phase asynchronous bipolar electric motor is rigidly mounted on a bushing. In order to transmit rotation frequencies on the order of 6,000-9,000 rpm to the spindle, the electric motor is fed a higher-frequency current (100-200 hertz) obtained from special converters. The viscose fiber enters the well through a thread guide that moves back and forth and, under the influence of centrifugal force, it is laid out in a spiral line on the wall of the well. Twisted yarns are obtained in the same way on various types of centrifugal spindles for natural fibers. In spinning chemical fibers, there is a tendency to create electrical spindles using ball bearings with packed lubricating grease, which is changed once every one or two years. Spindles with a rigid drive rotated by a screw coupling have come into use to a certain extent for spinning wool. Their principal advantage is the stability of the rotation frequency of the shaft (constancy of the twist of the yarn), which is necessary in order to obtain high-quality yarn. Spinning machines with spindles that have irregularly shaped caps on the ends of their shafts are also used in order to decrease the number of breaks in the yarn. The caps diminish the ball of thread that forms during twisting, which leads to lowering the tension of the yarn and to breakage. 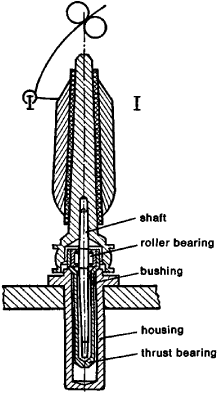 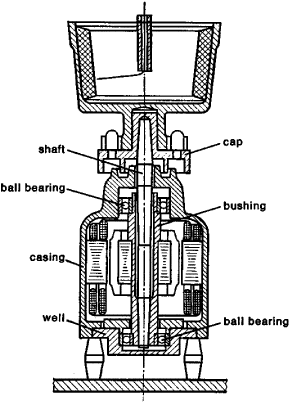 Double-twist spindles are used in the production of heavy threads for carpets, belting, cord, and rope. Such spindles are twice as productive as ordinary spindles, but their construction is complicated.

In the USSR and abroad, work is under way to substitute light oil for lubricating grease and roller bearings for sliding bearings, to increase the rotation frequency of the spindle and the quantity of bundles produced, to use sliding bearings made of special materials that require no lubricants and to use air bearings, and to increase the reliability and durability of spindles. A theory of spindle vibration has been developed by Soviet scientists.

the operating shaft of a metal-cutting machine tool. Either the tool (milling cutter, drill, grinding wheel, or the like) or the workpiece being machined may be attached to the spindle. Great demands are placed on a spindle with respect to rotational precision, which significantly affects the accuracy of machining. Thus, spindles are mounted on precision rolling-contact bearings or plain bearings; the spindles of internal grinding machines that exhibit particularly high rotation speeds (up to 100,000 rpm) are mounted on gas-lubricated plain bearings. The spindle may use a gear or belt drive, or it may be driven directly by a built-in electric motor or compressed-air turbine.

[′spin·dəl]
(cell and molecular biology)
A structure formed of fiberlike elements just before metaphase that extends between the poles of the achromatic figure and is attached to the centromeric regions of the chromatid pairs.
(design engineering)
A short, slender or tapered shaft.
(navigation)
A spar serving as a beacon.

1. A slender rod or pin on which anything turns, as the shaft to which a doorknob is attached.
2. On a lock mechanism, the bar connected with the knob or lever handle that passes through the hub of the lock or otherwise engages the mechanism to transmit the knob action to the bolt(s).
3. In woodworking, a short turned part as in a baluster.

1. a rod or stick that has a notch in the top, used to draw out natural fibres for spinning into thread, and a long narrow body around which the thread is wound when spun
2. one of the thin rods or pins bearing bobbins upon which spun thread is wound in a spinning wheel or machine
3. any of various parts in the form of a rod, esp a rotating rod that acts as an axle, mandrel, or arbor
4. a measure of length of yarn equal to 18 hanks (15 120 yards) for cotton or 14 400 yards for linen
5. Biology a spindle-shaped structure formed by microtubules during mitosis or meiosis which draws the duplicated chromosomes apart as the cell divides
6. a less common name for a hydrometer
7. a tall pole with a marker at the top, fixed to an underwater obstruction as an aid to navigation
8. a device consisting of a sharp upright spike on a pedestal on which bills, order forms, etc., are impaled

The rotating shaft in a disk drive. In a regular "fixed disk drive," the recording platters are attached to the spindle. In a removable disk cartridge, the spindle remains within the drive. Laptops use spindle designations to indicate the number of built-in drives. For example, a two-spindle machine contains a hard drive and a second bay for an optical drive. Sometimes the term is used merely as a synonym for disk drive; for example, "adding more spindles will alleviate the congestion."

Feedback
Flashcards & Bookmarks ?
Please log in or register to use Flashcards and Bookmarks. You can also log in with
Flashcards ?
My bookmarks ?
+ Add current page to bookmarks
TheFreeDictionary presents:
Write what you mean clearly and correctly.
Mentioned in ?
References in periodicals archive ?
You can start by moving the hand holding the singles around the shaft, but after you get a few wraps on top of each other to anchor the singles, it'll be easier to twist the spindle itself to wind up the singles.
As your hands get better at drafting smoothly, you'll be able to let your spindle hang from the yarn you're creating and spin continuously.
Spinning a Yarn
From the spindle properties described in the previous sections, we can propose that a spindle should be detected as follows:
(iv) local or synchronized event over the scalp: due to its focal apparition in deeper area, the spindle can also appear at scalp level as a superposition of several independent events.
Sleep Spindles as an Electrographic Element: Description and Automatic Detection Methods
Comparison of the Spindle Features between the First and the Last Part of the NREM Time.
In the controls, the time occupied with central spindle sequences increased towards the end of the night, whereas the sequence time of the patient groups did not change during the night (Figure 3).
CPAP Treatment Partly Normalizes Sleep Spindle Features in Obstructive Sleep Apnea
A potential limitation of our study is that it is restricted to the examination of benign sclerosing lesions, but, as discussed above, the immunohistochemical staining patterns of metaplastic carcinomas and benign spindle cell lesions of the breast have been well described by others.
The explanation for aberrant keratin expression in the stromal spindle cells of these benign sclerosing lesions is unclear.
Keratin Expression Patterns in Stromal Cells of Benign Sclerosing Lesions of the Breast: A Potential Diagnostic Pitfall
When a spindle was cut into two fragments using glass microneedles, each fragment regained its original spindle shape and microtubule density within five minutes of cutting (Figure 3).
These results demonstrate that spindle size is correlated with microtubule amount, and that spindle shape and microtubule density are dynamically maintained and unaffected by the physical intervention of 'cutting.'
Waseda University Team Sheds Light on Self-organization of Biological Structures
Failure to do so will cause the carbide of the center groover to hit the body of the other cutters and may result in the center groover bending when the set is tightened on the spindle.
Troubleshooting cutter problems
Staresina along with Scott Cairney at the University of York, UK, suspected that experimental reactivation of memories might lead to a surge of sleep spindles in a sleeping person's brain.
Cueing New Information in Sleep Improves Memory