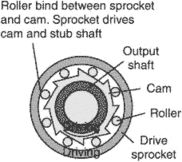 Freewheeling unit disengaged, in auto-rotation position.
A mechanical clutch used in reciprocating engines and direct-shaft turbine engines. It helps remove the load of the rotor when the engine is being started. In helicopters, it allows the engine to drive the rotor, but when the engine power is reduced, or the engine fails, the clutch allows the rotor to freewheel and prevents it from driving the engine. When the clutch is partially engaged, the RPM needles are split, and when it is fully engaged, the needles are married.
An Illustrated Dictionary of Aviation Copyright © 2005 by The McGraw-Hill Companies, Inc. All rights reserved

Feedback
Flashcards & Bookmarks ?
Please log in or register to use Flashcards and Bookmarks. You can also log in with
Flashcards ?
My bookmarks ?
+ Add current page to bookmarks
References in periodicals archive ?
According to Vernay et al.'s research [7, 8], the motions between the sprags and races are pure rolling with no relative motions in most work time, and the friction state of interaction in sprag clutch belongs to the static friction phase with no lubrication.
Based on Newton's second law, the differential equations of the motion can be derived and describe the dynamic behavior of multiarc sprag clutch during engagement.
To verify the effectiveness of the proposed model, the parameters and operating condition of Vernay's model are adapted, and a comparative analysis of the sprag clutch is carried out.
However, slip in initial engagement lasts only half thousandth of a second when the sprag clutch initially engages and has little effect on the torque transmitted [7, 8].
Based on the proposed model of multiarc sprag clutch, the dynamic behavior focusing on edge contact and stick-slip are investigated during preload engaging.
To understand the dynamic behavior of multiarc sprag clutch, a new multiarc sprag clutch is proposed to consider the geometry and interaction in this paper.
Based on the improved model, the calculated torsional stiffness has better agreement with FEM results than the previous model, and the dynamic behavior of the sprag clutch reveals the contact stress concentration throughout the engagement.
Using the method, the calculated torsional stiffness of multiarc sprag clutch has good agreement with FEM results, and the change rate of it presents the discontinuity at the junction points of circles.
(3) The alternate friction model considering stationary and rate-dependency friction is formulated and applied in the contacts of both the inner race and outer race, increasing a degree of revolution for the whole model of the sprag clutch. Due to the slip in contacts, the sprags may disengage with the races in the condition of high torsional vibration excitation with respect to preload, and serious wear would be caused in the condition of low torsional vibration excitation with respect to preload, when the maximum friction coefficient is toward its lower limit.
(4) The proposed model of multiarc sprag clutch is effective to reflect the dynamic behavior during engagement, especially the edge contact and stick-slip.
The following is the comparison of the torsional stiffness of multiarc sprag clutch through three different calculation methods of the local deformation: Hertzian contact theory, the slice method, and FEM.
Lowen, "A mathematical model of an overrunning sprag clutch," Mechanism and Machine Theory, vol.
An Analytical Model of Multiarc Sprag Clutch considering Geometry and Internal Interaction during Engagement
Encyclopedia browser ?
Full browser ?
CITE
Site: Follow: Share:
Open / Close