[′stag·ər]
(communications)
Periodic error in the position of the recorded spot along a recorded facsimile line.
McGraw-Hill Dictionary of Scientific & Technical Terms, 6E, Copyright © 2003 by The McGraw-Hill Companies, Inc. 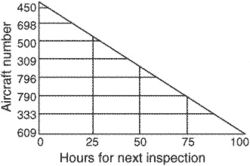 A typical stagger chart.
i. The distance between the leading edge of the lower wing of the biplane and the projection of the leading edge of the upper wing onto the chord line of the lower plane. If the top wing is in advance of the lower, it is called positive stagger if behind the lower, it is negative or backward stagger.
ii. A term used in aircraft servicing where the induction of aircraft for servicing is spaced out so that there is an even workload on the agency carrying out the servicing. The induction of aircraft is, thus, staggered.
iii. An alternative EW (electronic warfare) technique to PRF (pulse repetitive frequency) jitter, in which the PRF is varied by various means involving interleaving trains separated by an offset interval.
An Illustrated Dictionary of Aviation Copyright © 2005 by The McGraw-Hill Companies, Inc. All rights reserved

Feedback
Flashcards & Bookmarks ?
Please log in or register to use Flashcards and Bookmarks. You can also log in with
Flashcards ?
My bookmarks ?
+ Add current page to bookmarks
Mentioned in ?
References in classic literature ?
For a few minutes he lay there chattering and laughing, and then, with an awful scream, and before any of his companions could prevent, he staggered to his feet and leaped overboard.
View in context
This idea, growing, appeared to give him strength--a new and revivifying purpose--so that for a time he no longer staggered; but went forward steadily with head erect.
View in context
Maximilian tried to speak, but he could articulate nothing; he staggered, and supported himself against the wainscot.
View in context
La staggered forward, reeled, and fell across Werper in a swoon.
View in context
They all staggered along, Gerald still clutching the dressing-case, and supported on the other side by an excited and somewhat incoherent villager.
They staggered along down the lane, climbing once over a tree which lay across the lane and far into the adjoining field.
View in context
It yielded so suddenly at last, that he staggered back upon me, and I staggered back upon the opposite door, and we both laughed.
View in context
At last I could go no further; I was exhausted with the violence of my emotion and of my flight, and I staggered and fell by the wayside.
View in context
For once in her life Miss Cornelia was undeniably staggered.
View in context
Barnaby was beside him when he staggered to his feet.
View in context
Look at the sailor, called the mincer, who now comes along, and assisted by two allies, heavily backs the grandissimus, as the mariners call it, and with bowed shoulders, staggers off with it as if he were a grenadier carrying a dead comrade from the field.
View in context
Then came pealing through the air a bugle-call that froze my blood - "IT IS I, SOLDIER - COME!" I turned; Cathy was flying down through the massed people; she cleared the parapet at a bound, and sped towards that riderless horse, who staggered forward towards the remembered sound; but his strength failed, and he fell at her feet, she lavishing kisses upon him and sobbing, the house rising with one impulse, and white with horror!
View in context