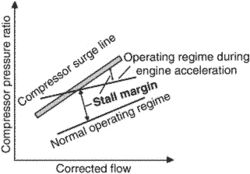 As it pertains to gas turbine engines, it is the parameter that is the difference between the operating RPM and the RPM at which the compressor blades will stall at any altitude and for transient slam acceleration.
An Illustrated Dictionary of Aviation Copyright © 2005 by The McGraw-Hill Companies, Inc. All rights reserved

Feedback
Flashcards & Bookmarks ?
Please log in or register to use Flashcards and Bookmarks. You can also log in with
Flashcards ?
My bookmarks ?
+ Add current page to bookmarks
Mentioned in ?
References in periodicals archive ?
Your target airspeed in turbulence--or when you suspect turbulence--should be 20 to 25 knots below the published VA or VB speed as adjusted for weight, or halfway between the weight-adjusted turbulent air penetration speed and Vsi, whichever provides a greater stall margin.
VA, VB And Negative G: the speed you aim for in turbulence probably isn't adjusted for weight, making it too fast. That's not hard to fix
According to Norm Cotter, full-scale testing of the original J58 compressor revealed the lack of sufficient stall margin at the higher Mach numbers.
However, performance studies done by FRDC engineer Bob Abernethy showed that for a J58 application requiring continuous high Mach number afterburner operation, ducting compressor bleed air directly into the afterburner not only eliminated the stall margin limits, but it also provided better engine performance.
Powering out of trouble
A properly arranged gas injection near the blade tips has proved to increase axial compressor stall margin, leading to a relatively wider operating range and a better operability.
Axial compressors for pipeline compression stations
"To reduce the risk of inadvertent stall/departure resulting in LOC accidents, the GA community should install and use AOA based systems for better awareness of stall margin," said the General Aviation Joint Steering Committee (GA-JSC) panel report focusing on LOC accidents in approach and landing phases.
Not just for jets anymore: new AoA indicators offer accuracy, predictability and easy installation
To solve the high speed stall problem, P&W engineers tweaked the engine turbine vanes to provide greater stall margin. After P&W experts in Hartford had reviewed the data from each test flight, their engineers would further modify the stall margin as appropriate, and we would fly again to perform the same maneuver to evaluate the change to compressor stall boundaries.
We carefully modified stall margins since engine efficiency is highest when operating close to the stall line.
Flight testing at Edwards AFB in the 1950s
was 62 MIAS and 52 MIAS for the clean and dirty configurations respectively, the 90 MIAS OAA display was considered to be too fast, providing too much stall margin. As the Alpha Systems AOA is not biased for flap position, the decision was made to recalibrate the system in the clean configuration at 3100 lbs.
Flying AOA: new-technology angle-of-attack indicators' more accurate and earlier stall warning can help prevent maneuvering and stall/spin accidents
Instead, establish a Vy pitch attitude on leaving the ground, and climb out at a shallower angle for a greater stall margin. * Keep bank angles, which erode climb performance, very shallow.
Overgross! Even a small amount of weight in excess of max gross can drastically affect performance. Here's what to expect if you overload your airplane