A column, particularly of structural steel; an upright bar placed between the mullions to strengthen a leaded light.
Illustrated Dictionary of Architecture Copyright © 2012, 2002, 1998 by The McGraw-Hill Companies, Inc. All rights reserved
The following article is from The Great Soviet Encyclopedia (1979). It might be outdated or ideologically biased.

a device for tying animals at such places in buildings as stalls and milking stalls, and sometimes in pastures and pens. A stanchion prevents the animal from moving too far forward or backward, from putting its feet in the feed trough or manure gutter, and from lying down across its stall. 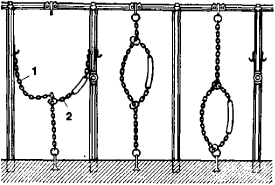 Stanchions are designed for one or several animals and are either vertical or horizontal in construction. The most common type of individual stanchion is the vertical two-ended chain stanchion (see Figure 1), which consists of two sections of chain 155 and 50 cm long with rings on the ends. The long chain is secured to the floor or front wall of the feed trough and suspended vertically from a hook on the stall frame. The short chain is mounted on the long one and put around the animal’s neck. Another type of individual stanchion is the individual cable stanchion. 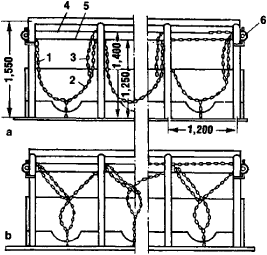 There are two types of group stanchions: chain and yoke stanchions. The most common chain stanchion (see Figure 2) consists of a cylinder and three chains connected to two cables. To tie an animal with such a stanchion, the handle of the cylinder is turned, moving the cables which draw the chain with them. Chain 1 and cable 5 are drawn inside chain 3, forming a collar that moves freely up and down. The stanchion is released by turning the cylinder in the opposite direction, causing the chains to separate and freeing the animal. A group yoke stanchion (see Figure 3) consists of tubular collars secured to slide bars that slide along the horizontal tubing of the stall frame, and of a drive mechanism. When the handle of the drive mechanism is turned, the slide bars move in opposite directions and the 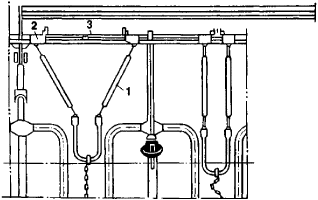 collars open up, permitting the animals to leave the stall at will. Turning the handle of the drive mechanism in the opposite direction brings the arms of the collar closer together, tying the animals in the stall.

1. A prop, upright bar, or piece of timber giving support to a roof, a window, or the like.
2. An upright bar, beam, or post, as of a window, screen, railing, etc.
McGraw-Hill Dictionary of Architecture and Construction. Copyright © 2003 by McGraw-Hill Companies, Inc.

Feedback
Flashcards & Bookmarks ?
Please log in or register to use Flashcards and Bookmarks. You can also log in with
Flashcards ?
My bookmarks ?
+ Add current page to bookmarks
Mentioned in ?
References in periodicals archive ?
You can purchase a metal stanchion for around $150 from companies that sell goat and sheep supplies.
Using a stanchion to feed a rejected lamb
www.CrowdControlExperts.com specializes in pedestrian traffic and crowd control stanchions and systems offering the highest quality and widest variety of Stanchions (Stantions), Barriers, ADA Compliant Posts, Display Posts, Heavy Duty Utility Posts, Single and Dual Line Posts, Belts, Ropes, and other crowd control equipment at the lowest prices.
CrowdControlExperts.com Introduces New Line of Low-Cost Crowd Control Products - PRIME Stanchions
A witness fishing from a nearby sandbar could barely see the approach light stanchions in the water because of the fog.
Riding the beam: when the weathers down, stay on the ILS glideslope. It'll take you where you want to go
Sometimes you could see the small lights on top of the stanchions but most times not.
Don't leave home without it
For roof-top and bridge work applications where's there are no vertical beams, he's designed a stanchion post component.
Putting the clamps on falls
THE GOAL THAT NEVER WAS: Luckless Brian Quailey watches his close range shot hit the stanchion and rebound back into play but what should have been Boro's third goal was not to be as the referee and his assistant thought the ball hit the crossbar and bounced out.
BORO'S HOME ADVANTAGE; FOOTBALL
If you get dairy goats, you'll probably want to build this nifty stanchion to make milking easy for both the milker and the milkee.
Make your own milking stanchion
Referee Mike Riley judged that the ball had hit the stanchion before bouncing back into play - but McGhee believed the linesman's flag prompted his players to react and crowd round the official.
FOOTBALL: MILLWALL FURY; BARNSLEY 1 MILLWALL 1: Lions in mass protest over penalty decision
6 Set the first post on the sand footing and adjust the stanchion until it's plumb and roughly square to the direction of the wall face.
retaining wall
A rechargeable battery option enables free use in stanchion barns or bucket milking plants.
Programmable software customizes EP 70 for milking animals besides cows
SIS viewers yesterday witnessed a horrific incident in the 11.58am race at Sheffield's BAGS meeting when the trap three runner, Smokey Hotpot, ran into a stanchion on the inside of the track on the run-up.
Greyhounds: Sheffield shock
He had to climb down from Sky Sports's purposebuilt stanchion and kick one of the lit flares away before he was able to resume his part in the live broadcast.
Flare thugs target telly van at game; Devlin and Moir admit putting fellow Celtic fans and cameraman in danger