[′stand·iŋ ′wāv]
(physics)
A wave in which the ratio of an instantaneous value at one point to that at any other point does not vary with time. Also known as stationary wave.

(or stationary wave), a wave arising as a result of the interference of two waves propagating in opposite directions. In practice, a standing wave is formed, owing to the superposition of the incident wave and the reflected wave, when a wave is reflected from an obstacle or inhomogeneity. Different parts of a standing wave oscillate in the same phase but with different amplitudes (see Figure 1). In contrast to a traveling wave, there is no net energy flow in a standing wave. 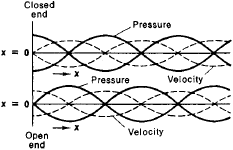 Figure 1. Pressure and velocity distribution in a standing wave in a tube with a closed end and a tube with an open end

Standing waves can arise in, for example, an elastic system, such as a bar or a column of air located inside a tube that is closed at one end and in which traveling waves are produced by the oscillation of a piston in the tube. The traveling waves are reflected from the boundaries of the system, and standing waves are formed in the system as a result of the superposition of the incident and reflected waves. In this case, displacement (velocity) nodes and antinodes are formed along the length of the column. The displacement nodes are planes perpendicular to the axis of the column; in these planes, there are no displacements of air particles but the pressure amplitudes are at a maximum. The antinodes are planes in which the displacements are at a maximum and the pressures are equal to zero. The displacement nodes and antinodes are located in the tube at quarter-wavelength distances. Moreover, a displacement node and a pressure antinode are always formed at the solid wall at the end of the tube. A similar situation is observed if this solid wall is removed, but the velocity antinode and pressure node are then located approximately in the plane of the opening. Standing waves can be formed in any volume with definite boundaries and a sound source, but in this case the standing waves have a more complicated structure.

Any wave process associated with the propagation of disturbances can be accompanied by the formation of standing waves. Standing waves can arise not only in gaseous, liquid, and solid media but also in a vacuum where electromagnetic disturbances are propagated and reflected. Such waves may arise, for example, in electric transmission lines. The antenna of a radio transmitter is often made in the form of a linear dipole or system of di-poles, along which a standing wave is formed. Specific types of standing waves are established in sections of wave guides and in closed, variously shaped volumes used as resonators in microwave equipment. The electric and magnetic fields in electromagnetic standing waves are separated in much the same way as the displacement and pressure in elastic standing waves.

Strictly speaking, pure standing waves can be established only in the absence of damping in the medium and only when there is total reflection of waves from the boundary. Traveling waves, which feed energy to points of energy absorption or emission, are usually present in addition to standing waves.

i. A wave in the atmosphere that remains stationary in a moving fluid. Mountain waves and lee waves are two standing waves normally encountered in flight. See mountain wave.
ii. A stationary wave or wave pattern formed in a vibrating body (e.g., in a turbine disc by reflection).
iii. Stationary voltage existing on an antenna that is caused by two waves traveling in opposite directions along the conductor but which are identical in amplitude and frequency.

Feedback
Flashcards & Bookmarks ?
Please log in or register to use Flashcards and Bookmarks. You can also log in with
Flashcards ?
My bookmarks ?
+ Add current page to bookmarks
TheFreeDictionary presents:
Write what you mean clearly and correctly.
Mentioned in ?
References in periodicals archive ?
where: [E.sub.max] = maximum voltage on standing wave
Switching considerations for microwave test systems: with today's technology, RF switching and signal control are moving out of the realm of mystery and black magic and into the arena of open standards solutions
A related process, in which a laser standing wave focuses neutral atoms onto a resist and the pattern is transferred by etching has also been demonstrated with cesium atoms(6) and metastable neon atoms(7).
Accuracy of nanoscale pitch standards fabricated by laser-focused atomic deposition
The important change I've decided to make based on this typology/methodology/tool of analysis is listing what I consider to be fundamental modes of the standing wave of style.
The Standing Wave Theory of Hallyu
If we assume a three-dimensional standing wave packet, [[PSI].sub.p](r,t) = [q.sub.p] = [q.sub.0p][sin([k.sub.0]r)/[k.sub.0]r] x sin([[omega].sub.0]t).
Interactions in an Acoustic World: Dumb Hole
For Taonga Tu Puoro: Standing Waves in Space, the frequency to be used in the room was found using a tone generator.
Taonga Tu Puoro
Taking each PZT plate as a standing wave source, the travelling wave generated in the stator with four PZT plates can be calculated as:
A hollow cylindrical linear nut-type ultrasonic motor
As a note, this paper will use the word salphasic as a qualifier that denotes a standing wave having a particular pattern--i.e.
Highly Efficient, Zero-Skew, Integrated Clock Distribution Networks Using Salphasic Principles
There are standing wave solutions to (4)-(7) of the form
Remarks on Chern-Simons-Higgs equations in [R.sup.1+1]
Patent Office that covers the development of a speaker enclosure that solves the issue of redirecting destructive standing waves, and provides true to source listening.
Smith Audio Patents Innovative Technique to Redirect Standing Waves
The standing wave solution over beaches at angles [alpha] = [pi]/2n
A fresh look on old analytical solutions for water waves on a constant slope/Lainerunnaku keerukate analuutiliste kirjelduste numbrilise analuusi tehnika
2) High waves with significant amount of power in standing wave mode approach the berm top with the help of rising tide (and mean water level up).
Field observation of morpho-dynamic processes during storms at a Pacific beach, Japan: role of long-period waves in storm-induced berm erosion
Standing waves are formed in the tube when the sound waves propagated in it are reflected at both the open and closed ends.
Innovative use of smart phones: for a sound resonance tube experiment