(stĕr`ēəskōp'), optical instrument that presents to a viewer two slightly differing pictures, one to each eye, to give the effect of depth. In normal vision the two eyes, being a certain distance apart, see slightly different aspects of a scene. The impression of depth is obtained when the brain combines the images. A single photograph shows no more than what one eye would see. In a stereoscope two photographs, taken from positions related approximately as the positions of a person's two eyes, are placed side by side. When a person observes these photographs, his brain combines the separate images from each eye into a single three-dimensional one. Scientists, among them the English physicist Sir Charles Wheatstone in 1838, constructed stereoscopes for use with drawings, but suitable views were not generally available until the development of photography. In 1849, Sir David Brewster, a Scottish physicist, improved the stereoscope and invented the double camera for taking stereoscopic views. Oliver Wendell Holmes invented the kind of stereoscope that, together with a collection of stereoscopic views, became a popular instrument of home entertainment in the United States until the advent of the home phonograph and the radio. The principle of the stereoscope is applied in binocular field glasses and binocular microscopes.
The Columbia Electronic Encyclopedia™ Copyright © 2013, Columbia University Press. Licensed from Columbia University Press. All rights reserved. www.cc.columbia.edu/cu/cup/

An instrument for viewing a stereoscopic pair of photographs three-dimensionally, consisting of two lenses set at the correct distance apart to correspond with the separation of the stereoscopic camera lens.
Illustrated Dictionary of Architecture Copyright © 2012, 2002, 1998 by The McGraw-Hill Companies, Inc. All rights reserved
The following article is from The Great Soviet Encyclopedia (1979). It might be outdated or ideologically biased.

an optical device for the three-dimensional viewing of photographs of landscapes or individual objects. The photographs must be taken from two different points and must overlap in order to reproduce objects in a manner corresponding to that in which they are individually seen by the right and left eyes. All stereoscopes are constructed with regard to the deviation of the rays from common points observed in the photographs in such a way that such points are perceived coincidentally (Figure 1). In some cases, this is achieved by using correspondingly mounted lenses; in other cases, mirrors are used. Stereoscopes 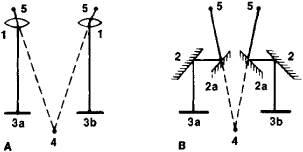 Figure 1. Diagrams of stereoscopes: (A) lens stereoscope, (B) mirror stereoscope; (1) lenses, (2) and (2a) mirrors, (3a) and (3b) identical points on the right and left photographs of a stereopair, (4) point at which the points 3a and 3b are seen stereoscopically as coincident, (5) ocular axes of the observer

are used mainly for aerial photo interpretation. There are more than 100 different designs of stereoscopes. The major types are given in Table 1.

Some tabletop and stationary models, called scanning stereoscopes, are designed to permit rapid sequential viewing of a series of stereoscopic photographs by means of mutual displacements of the bed of the device and of the optical system. Stereomicroscopes are used for especially detailed study of scientific and technical photographs. They provide variable magnification up to 70 × (for a field of view of 2.5–3 mm) and up to 200 × with additional attachments. Pantographic stereoscopes are used in cartography. They are combinations of stereoscopes with variable magnification and optical pantographs. In the USSR and other countries, several models of portable and tabletop stereoscopes are produced as part of a system with measuring accessories (parallax instruments) and drafting attachments.

[′ster·ē·ə‚skōp]
(optics)
An optical instrument in which each eye views one of two photographs taken with the camera or object of study displaced, or simultaneously with two cameras, or with a stereoscopic camera, so that a sensation of depth is produced.
McGraw-Hill Dictionary of Scientific & Technical Terms, 6E, Copyright © 2003 by The McGraw-Hill Companies, Inc.

A handheld viewer that provides the illusion of a 3D image by using two 2D images (stereo images). Dating back to the 1890s and only for still images, stereoscopes were the first attempts at going beyond 2D. For more details about 3D, see 3D visualization, anaglyph 3D, polarized 3D, active 3D, lenticular 3D, parallax 3D and 3D glasses.

Feedback
Flashcards & Bookmarks ?
Please log in or register to use Flashcards and Bookmarks. You can also log in with
Flashcards ?
My bookmarks ?
+ Add current page to bookmarks
Mentioned in ?
References in periodicals archive ?
Through the stereoscope, Victorians were able to see 3-D images of Rievaulx in its changing guises, overtaken by nature, as a pasture for sheep and later shrouded in scaffold as workmen worked to reclaim the site from the surrounding countryside.
romantic ruins host display of 3-D slides
To further study the hemostatic mechanisms of BSMPs, we observed blood/BSMP aggregation formation under a stereoscope (Figures 3(a) and 3(b)).
Bletilla striata Micron Particles Function as a Hemostatic Agent by Promoting Rapid Blood Aggregation
Big House Publishing's Krista Retto comments, "Our deal with Stereoscope is super exciting.
Big House Publishing and Stereoscope Music Scandinavia Announce Sub-Publishing Deal
As we worked together to catalogue his stereoscope collection, we discussed the numerous affinities between the technical aspects of the photographic medium and the formal techniques of Caillebotte's paintings which he summarized in his 2004 book Impressionism: Paint and Politics (Hauppauge, NY: Nova Science Publishers, 2004).
Looking through the Parisian Window: Caillebotte, Zola, and the Post-Haussmann Interior
Measurement of SL to the nearest 0.1 mm was conducted with a Leica MZ6 stereoscope (Leica Microsystems Inc., Buffalo Grove, IL) calibrated against a stage micrometer.
Age, growth, and recruitment of larval and early juvenile Atlantic croaker (Micropogonias undulatus), determined from analysis of otolith microstructure
AlSalah asked her brother Lotfi, an architect, to help design a contemporary stereoscope that would enable people to view the photographs at the locations where they were originally taken.
Glimpses of Beirut in 1915
The Brewster stereoscope uses two convex lenses of focal length 10-15 cm and 6.5 cm apart.
3-D pictures in science
49) Malin continues his historical study into this early 20th century period by exploring the connection between human feeling and the stereoscope, "a binocular viewing apparatus through which two nearly identical, side-by-side photographs produce a single 'three-dimensional' image" (p.
Brenton J. Malin, Feeling Mediated: A History of Media Technology and Emotion in America
Though we think of 3D as 21st century technology, 100 years ago there was a craze for three dimensional photographs which could be viewed through a device called a stereoscope.
We were bombed but all I got was peat. Images if it was bodies rocks& metal? TONY ROBINSON BLASTED IN WWI TRENCH ATTACK
The surface was observed using a stereoscope before and afterim- mersion.
SACRIFICIAL PROTECTION METHOD DURING DISINFECTION TO AVOID CORROSION
Photographs of specimens were taken by a stereoscope Carl Zeiss III with a PaxCam III digital camara.
Species of Sphenophorus (Coleoptera: Dryophthoridae) associated with golf courses in Mexico