(străt`əsfēr), second lowest layer of the earth's atmosphereatmosphere
[Gr.,=sphere of air], the mixture of gases surrounding a celestial body with sufficient gravity to maintain it. Although some details about the atmospheres of other planets and satellites are known, only the earth's atmosphere has been well studied, the science of
..... Click the link for more information. . The level from which it extends outward varies with latitude; it begins c.5 1-2 mi (9 km) above the poles, c.6 or 7 mi (c.10 or 11 km) in the middle latitudes, and c.10 mi (16 km) at the equator, and extends outward c.20 mi (32 km). It is a zone of dry, thin air, cold and clear, with a horizontal temperature gradient, that, in its lower level, is the reverse of that near the earth's surface. In polar regions the temperature is −40&degF to −50&degF (−40&degC to −46&degC), but near the equator it ranges from −80&degF to below −100&degF (−62&degC to below −74&degC); in the middle latitudes it remains steady at about −67&degF (−55&degC).

The stratified variations in temperature were deduced from the behavior of sound waves transmitted through the atmosphere, which travel faster in warm air than in cold air. Weather balloonsweather balloon,
balloon used in the measurement and evaluation of mostly upper atmospheric conditions (see atmosphere). Information may be gathered during the vertical ascent of the balloon through the atmosphere or during its motions once it has reached a predetermined maximum
..... Click the link for more information.  carrying electronic equipment are launched to ascertain conditions in the stratosphere; information on this atmospheric layer is also acquired from earth-orbiting satellites.

Within the stratosphere at altitudes of 12 to 30 mi (19–48 km) is the ozone layerozone layer
or ozonosphere,
region of the stratosphere containing relatively high concentrations of ozone, located at altitudes of 12–30 mi (19–48 km) above the earth's surface.
..... Click the link for more information. . Its capacity to intercept most of the sun's ultraviolet rays is fundamental to the maintenance of life on the earth. Without this filtering effect, the sun's full radiation would destroy animal tissue, but sufficient ultraviolet radiation reaches the earth to support the activation of vitamin D in humans. Elevated temperatures found in the ozone layer result from its absorption of radiant energy.

Measurements of Antarctica's ozone layer have registered a consistent seasonal "hole," or thinning, in the layer above the South Pole since 1985, and since then similar thinnings have been found over other areas of the world. There is evidence that the ozone is being broken down by chlorine atoms that are released when sunlight breaks up substances such as chlorofluorocarbonschlorofluorocarbons
(CFCs), organic compounds that contain carbon, chlorine, and fluorine atoms. CFCs are highly effective refrigerants that were developed in response to the pressing need to eliminate toxic and flammable substances, such as sulfur dioxide and ammonia, in
..... Click the link for more information.  (CFCs). Montreal ProtocolMontreal Protocol,
officially the Protocol on Substances That Deplete the Ozone Layer, treaty signed on Sept. 16, 1987, at Montreal by 25 nations; 197 nations are now parties to the accord.
..... Click the link for more information.  and its amendments now ban these substances and have set time limits on the production of others that may also affect the ozone layer.

At heights of 20–30 km, nacreous clouds are sometimes found; they apparently consist of ice crystals or supercooled droplets of water. The lower stratosphere at about 20–25 km has an increased content of aerosol particles, particularly sulfate particles from volcanic eruptions. Because of the low turbulent exchange and the absence of the washing out by precipitation, the aerosol particles have a longer lifetime here than they do in the troposphere. By increasing the atmospheric albedo, this aerosol layer of the stratosphere leads to a drop in air temperature at the earth’s surface; the decrease is particularly marked after large explosive eruptions of volcanoes.

[′strad·ə‚sfir]
(meteorology)
The atmospheric shell above the troposphere and below the mesosphere; it extends, therefore, from the tropopause to about 33 miles (55 kilometers), where the temperature begins again to increase with altitude.
McGraw-Hill Dictionary of Scientific & Technical Terms, 6E, Copyright © 2003 by The McGraw-Hill Companies, Inc. 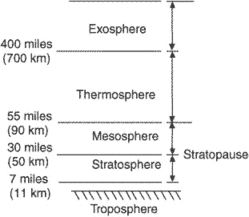 The layer of the atmosphere extending from the tropopause to a height of about 30 miles (50 km). The layer is characterized by a vertical isotherm (equal temperature) in the lower atmosphere followed by a temperature that increases with the height. This increase is most noticeable where the average temperature is just below 0°C. Ozone is present in a small quantity in the stratosphere.
An Illustrated Dictionary of Aviation Copyright © 2005 by The McGraw-Hill Companies, Inc. All rights reserved

the atmospheric layer lying between the troposphere and the mesosphere, in which temperature generally increases with height
Collins Discovery Encyclopedia, 1st edition © HarperCollins Publishers 2005

Feedback
Flashcards & Bookmarks ?
Please log in or register to use Flashcards and Bookmarks. You can also log in with
Flashcards ?
My bookmarks ?
+ Add current page to bookmarks
Mentioned in ?
References in periodicals archive ?
Today, there no longer is any doubt about the impact of large numbers of aircraft flying in the stratosphere. Nonetheless, planes already are flying there -- subsonic planes.
Behind the contrail curtain
Then, too, chlorine gas and hydrogen chloride are both extremely reactive compounds; they are likely to react with other materials in the lower atmosphere and be destroyed before they rise high enough to enter the stratosphere. But freons are commercially valuable specifically because they are so chemically inert; the only thing that effectively breaks them apart is hard radiation, such as the ultraviolet rays in the stratosphere.
Trees and volcanoes cause smog! (More myths from the "Wise Use" movement)
Fluorine can only reach the stratosphere as part of a CFC molecule.
Ozone depletion: myth vs. measurement
Increases of ozone at upper altitudes in early October, carried there by winds, occurred above the ozone destruction in the lower stratosphere.
Ozone hole still not on path of recovery
The bright lights did not phase Schumaker as he entered the HPT Stratosphere main event, where he outlasted the likes of Scotty Nguyen, Hoyt Corkins, Kathy Leibert, Dennis Phillips, Eli Elezra, and many other notable players.
Free Poker Network Awards $10,000 Heartland Poker Tour "Dream Package"
While it has been known for decades that large wildfires can create or enhance thunderstorm clouds, leading to what are called pyrocumulonimbus clouds, only recently have scientists discovered that the clouds can boost smoke into the stratosphere. Once in this layer of the atmosphere--immediately above the troposphere, where most of Earth's weather happens--the smoke can be caught by jet stream winds and carried long distances, says Mike Fromm, a meteorologist at the Naval Research Laboratory in Washington, D.C.
Smoke from a distant fire: burning forests can send aerosols into the stratosphere and around the world
That's because air circulation in the stratosphere causes gases from the tropics to circle around Earth and move toward the poles.
Cool blast
Officially, this is a styling exercise, but just as the B-King concept from 2001 is heading to production in 2006, the Stratosphere could become a showroom reality.
High hopes for Stratosphere!
The new attraction at the top of the Stratosphere Hotel and Casino shoots riders out 900ft above the Las Vegas Strip, then spins them around facing the ground at 40mph.
Height of Insanity
HOLLYWOOD Stratosphere Entertainment has acquired North American rights to first-time director Kevin Jordan's ultra low-budget film, "Goat on Fire and Smiling Fish."
Stratosphere inks `Goat' trio