The contouring of a body to reduce its resistance (drag) to motion through a fluid.

For fluids with relatively low viscosity such as water and air, effects of viscous friction are confined to a thin layer of fluid on the surface termed the boundary layer. Under the influence of an increasing pressure, the flow within the boundary layer tends to reverse and flow in an upstream direction. Viscosity tends to cause the flow to separate from the body surface with consequent formation of a region of swirling or eddy flow (termed the body wake; illus. a). This eddy formation leads to a reduction in the downstream pressure on the body and hence gives rise to a force opposite to the body motion, known as pressure drag. See Wake flow 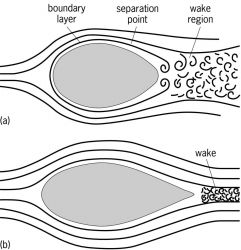 In general, streamlining in subsonic flow involves the contouring of the body in such a manner that the wake is reduced and hence the pressure drag is reduced. The contouring should provide for gradual deceleration to avoid flow separation, that is, reduced adverse pressure gradients. These considerations lead to the following general rules for subsonic streamlining: The forward portion of the body should be well rounded, and the body should curve back gradually from the forward section to a tapering aftersection with the avoidance of sharp corners along the body surface. These conditions are well illustrated by teardrop shapes (illus. b).

At supersonic speeds the airflow can accommodate sudden changes in direction by being compressed or expanded. Where this change in direction occurs at the nose of the body, a compression wave is created, the strength of which depends upon the magnitude of the change in flow direction. Lowering the body-induced flow angle weakens this compression shock wave. When the flow changes direction again at the midpoint of the body, the air will expand to follow the shape of the body. This change in direction creates expansion waves. At the tail of the body the direction changes again, creating another compression or shock wave. At each of these shock waves, changes in pressure, density, and velocity occur, and in this process energy is lost. This loss results in a retarding force known as wave drag. See Shock wave

Bodies which are streamlined for supersonic speeds are characterized by a sharp nose and small flow deflection angles. Because the intensity of the shock wave and the drag level is dependent upon the magnitude of the change in flow direction, the width or thickness of the body should be minimal. See Boundary-layer flow

[′strēm‚līn·iŋ]
(design engineering)
The contouring of a body to reduce its resistance to motion through a fluid.
McGraw-Hill Dictionary of Scientific & Technical Terms, 6E, Copyright © 2003 by The McGraw-Hill Companies, Inc.

Feedback
Flashcards & Bookmarks ?
Please log in or register to use Flashcards and Bookmarks. You can also log in with
Flashcards ?
My bookmarks ?
+ Add current page to bookmarks
Mentioned in ?
References in periodicals archive ?
Horizons presented streamlining as an idiom uniquely suited to contain the seeming paradox of style and function.
Both natural and mechanical: the streamlined designs of Norman Bel Geddes
Pointing out that meaningful streamlining of tax administration can only occur through the simplification of the tax law, Mr.
TEI gives e-filing frosty reception: TEI discusses e-filing mandate, 2004 Act Guidance, and other key issues during Washington liaison meetings; files comments on Canada's Technical Tax Bill; and testifies at IRS Oversight Board hearing
Some corporate executives see the Armed Forces as a prime target for such streamlining. "The military has some real structural advantages," says Dayton Ogden, chairman of Spencer Stuart & Associates, a Stamford, Conn., executive search firm.
Military pinstripes: all hoopla aside, the Armed Forces are getting serious about learning from business
Streamlining tools such as lean manufacturing, six sigma and theory of constraints have become commonplace in a range of industries.
Enhancing capabilities and streamlining processes at Zeon Chemicals
According to the Congressional Research Service CRS Report for Congress: Environmental Streamlining Provisions in the Transportation Equity Act for the 21st Century Status of Implementation, "Numerous stakeholders have expressed long-standing concerns about delays and increased costs for major highway construction projects, which are often attributed to the environmental review process required by the National Environmental Policy Act (NEPA, P.L.
The road to streamlining: An indepth look at the NEPA process and ways to expedite it
Although analyst estimates show OfficeMax, which is based in Shaker Heights, Ohio, has reduced charges by streamlining its operations, the company struggled, losing 16.72%, going from $5.74 to $4.78 since recommendation.
Still searching for bargains: Howard Morris' focus on value couldn't fend off the bear market. (Stock Update)
Each starts with a "Streamlining" -- a firm push from the wall or a dive from the blocks, a flutter kick, plus an underwater glide.
Swim!bike!run! Organization for the high school triathlon. (Track & Field)
To "annihilate all unnecessary bureaucracy." (Alas, good men and women before him have espoused the dream.) Yes, it's all about streamlining technology and business processes, but translated, says the new president, that means: delegation, empowerment, and action.
Death to bureaucracy! (Editor's Note)
The bones of the ankles and feet also took on a paddle shape, and individual digits were closely packed within a streamlining envelope of soft tissue.
Sea dragons: big news about ichthyosaurs, which cruised ancient oceans while dinosaurs ruled the land
provides "collaboration without complication" for construction project managers, streamlining supply chain and contractor management by maintaining all project documents and communications on a secure, open platform.
IRONSPIRE ENHANCES PRIMESITE PROJECT MANAGEMENT SYSTEM
This includes streamlining the organization and modernizing our approach to business information.
A planning guidance for the security cooperation community
Nokia has not given a figure for how much it hopes to save from the streamlining.
Nokia to streamline logistics operations