(strĕp'tōmī`sĭn), antibioticantibiotic,
any of a variety of substances, usually obtained from microorganisms, that inhibit the growth of or destroy certain other microorganisms. Types of Antibiotics
..... Click the link for more information.  produced by soil bacteria of the genus Streptomyces and active against both gram-positive and gram-negative bacteria (see Gram's stainGram's stain,
laboratory staining technique that distinguishes between two groups of bacteria by the identification of differences in the structure of their cell walls. The Gram stain, named after its developer, Danish bacteriologist Christian Gram, has become an important tool
..... Click the link for more information. ), including species resistant to other antibiotics, e.g., some streptococci, penicillin-resistant staphylococci, and bacteria of the genera Proteus and Pseudomonas. Originally isolated in 1947 by Albert Schatz, a graduate student working in Selman A. WaksmanWaksman, Selman Abraham
, 1888–1973, American microbiologist, b. Priluka, Russia, grad. Rutgers (B.S. 1915), Ph.D. Univ. of California, 1918. He went to the United States in 1910 and was naturalized in 1916.
..... Click the link for more information. 's laboratory, streptomycin is effective against tubercle bacilli and has long been a mainstay of tuberculosistuberculosis
(TB), contagious, wasting disease caused by any of several mycobacteria. The most common form of the disease is tuberculosis of the lungs (pulmonary consumption, or phthisis), but the intestines, bones and joints, the skin, and the genitourinary, lymphatic, and
..... Click the link for more information.  therapy. Because streptomycin-resistant tubercle bacilli emerge during treatment, the antibiotic is usually used in combination with one or more of the drugs isoniazidisoniazid
, drug used to treat tuberculosis. Also known as isonicotinic acid hydrazide, isoniazid is the most effective antituberculosis drug currently available. The drug inhibits or kills the tubercle bacilli that cause the disease.
..... Click the link for more information. , ethambutol, and aminosalicylic acid, and isoniazid is now the treatment of choice for prevention of tuberculosis and for active cases. Streptomycin acts by inhibiting protein synthesis and damaging cell membranes in susceptible microorganisms. Possible side effects include injury to the kidneys and nerve damage that can result in dizziness and deafness.

an antibiotic produced by fungi of the genus Actinomyces (Streptomyces). Streptomycin was first obtained in 1944 from A. griseus by the American scientist S. A. Waksman and his colleagues. Chemically, streptomycin is an aminoglycoside antibiotic; in acid hydrolysis, the molecule breaks down into streptidine (A; see formula) and streptobiosamine (B). Chemically, streptidine is the hexatomic cyclic alcohol inositol substituted by two guanidine groups. Streptobiosamine is a disaccharide containing a methylamino group. Streptomycin has the properties of a base; it dissolves readily in water and is virtually insoluble in organic solvents. It easily forms salts with various acids. The molecular weight is 581.6. In a dried state, streptomycin remains active for more than two years. 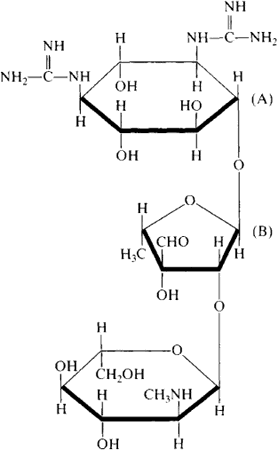 A broad-spectrum antibiotic, streptomycin is active against tuberculosis bacteria and the pathogens of plague, tularemia, brucellosis, and dysentery. It is also active against Escherichia coli, staphylococci, streptococci, pneumococci, gonococci, and menin-gococci but is not active against fungi, protozoans, anaerobic microbes, spirochetes, rickettsiae, or viruses. Attaching itself to ribosomes in the bacterial cell, streptomycin interferes with the reading of the genetic code and inhibits the biosynthesis of protein. The primary mechanism of streptomycin’s effect has not been definitely established. Since with the clinical use of streptomycin strains of resistant bacteria are formed, the antibiotic is used in combination with other compounds. Streptomycin is most effective in the treatment of tuberculosis; it is also used in treating meningitis, endocarditis, whooping cough, gonorrhea, and many other diseases. The most serious side effects arising from prolonged use of streptomycin are vestibular disorders and impairment of hearing.

[‚strep·tə′mīs·ən]
(microbiology)
C21H39O12N7 A water-soluble antibiotic obtained from Streptomyces griseus that is used principally in the treatment of tuberculosis.
McGraw-Hill Dictionary of Scientific & Technical Terms, 6E, Copyright © 2003 by The McGraw-Hill Companies, Inc.

Feedback
Flashcards & Bookmarks ?
Please log in or register to use Flashcards and Bookmarks. You can also log in with
Flashcards ?
My bookmarks ?
+ Add current page to bookmarks
Mentioned in ?
References in periodicals archive ?
They found that penicillin and streptomycin at a final concentration of 0.1 g [L.sup.-1] each significantly reduced bacterial growth within two hours.
A review on the effects of antimicrobials use in cultures of planktonic organisms: a procedure for ecological experiments
Resistance to one drug only was observed and highest resistance of 4.6% was observed in streptomycin and lowest of 1.9% in ethambutol as shown in Table-2.
Drug Resistant Tuberculosis: Pattern Seen among Patients Visiting Mayo Hospital, Lahore
In our study, we used combination of local analgesia, anti-inflammatory and streptomycin, an antibiotic, in patients with KOA.
Localized Injection of Streptomycin, Kenacort and Lidocaine combination for Symptomatic Pain Management of Knee Osteoarthritis
The highest resistance frequencies to the antibiotics tested in both methods were observed to streptomycin and ampicillin.
Methods for the evaluation of antibiotic resistance in Lactobacillus isolated from fermented sausages/Comparacao de metodos para avaliacao de resistencia microbiana em Lactobacillus isolados de embutidos fermentados
IPM was done for isoniazid (0.2 [micro]g/ml), rifampicin (40 [micro]g/ml), ethambutol (2 [micro]g/ml) and streptomycin (4 [micro]g/ml).
Incidence of various clinico-morphological variants of cutaneous tuberculosis and its drug susceptibility pattern-Delhi based study
Bottger, "Molecular basis of streptomycin resistance in Mycobacterium tuberculosis: alterations of the ribosomal protein S12 gene and point mutations within a functional 16S ribosomal RNA pseudoknot," Molecular Microbiology, vol.
Phenotypic and Genotypic Analysis of Multidrug-Resistant Mycobacterium tuberculosis Isolates from Sudanese Patients
Among the four known anti-TB drugs investigated in this study (rifampicin, streptomycin, amikacin, and ciprofloxacin), the highest activity was registered by rifampicin at 0.81 [micro]g/mL, followed by streptomycin at 1.10 [micro]g/mL.
In Vitro Susceptibility of Mycobacterium ulcerans Isolates to Selected Antimicrobials
Distribution of tetracycline and streptomycin resistance genes and class 1 integrons in Enterobacteriaceae isolated from dairy and nondairy farm soils.
COMPARATIVE ANTIBIOTIC RESISTANCE PROFILE OF THE MULTIDRUG RESISTANT E.COLI ISOLATED FROM COMMERCIAL AND BACKYARD POULTRY
Amino glycosides including streptomycin have been found to cause modulation of the release of excitatory neurotransmitters from primary afferent nerve terminals.
PAIN RELIEF IN NEUROPATHIC PAIN-A COMPARISON BETWEEN 0.5% BUPIVACAINE AND 0.5% BUPIVACAINE STREPTOMYCIN COMBINATION
tuberculosis streptomycin rpsL43 rpsL88 dot blot hybridization PCR- RFLP
The Prevalence of Common Mutations in rpsL Gene Associated with Resistance to Streptomycin in Random and Multiple Drug Resistant Isolates of M. tuberculosis from Pakistan
The test was performed for the following antibiotics and amounts: ampicillin, 10 [micro]g, imipenem, 10 [micro]g, gentamicin, high content, 30 [micro]g, streptomycin, high content, 300 [micro]g, vancomycin, 5 [mucro]g, linezolid, 10 [micro]g, quinupristin/dalfopristin, 15 [micro]g, trimethoprim/sulfamethoxazole, 25 [micro]g, and tigecycline, 15 [micro]g (disks were purchased from Oxoid, UK and Becton Dickinson, USA).
Occurrence of high-level aminoglycoside resistance (HLAR) among enterococcus species strains
Almost right in the middle of the 20th Century, the first ever, almost proper, randomized controlled trial (RCT) was realized (4); it showed that streptomycin was more effective than traditional treatment, which was not much more than tender loving care, in treating tuberculosis of the lung.
A personal account of the evidence for evidence-based medicine