being, having, or travelling at a velocity below that of sound

[¦səb′sän·ik]
(acoustics)
infrasonic
(physics)
Of, pertaining to, or dealing with speeds less than acoustic velocity, as in subsonic aerodynamics. 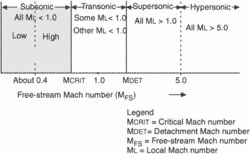 A flight in which the airflow over the aircraft structure is moving at a speed that is less than the local speed of sound.

Feedback
Flashcards & Bookmarks ?
Please log in or register to use Flashcards and Bookmarks. You can also log in with
Flashcards ?
My bookmarks ?
+ Add current page to bookmarks
TheFreeDictionary presents:
Write what you mean clearly and correctly.
Mentioned in ?
References in periodicals archive ?
It would operate subsonically, at about 60,000 feet in altitude for missions lasting as long as three days.
Solutions to Self-Jamming Sought. (Washington Report)
The pilot was forced to carry on the flight subsonically instead of at its normal cruising speed of 1,300 mph.
BRITISH SCARE WAYS!; Concorde has always been the dream plane for champagne celebs...so why are the scared stars refusing to fly on it?
(The subsonic leg avoids overland sonic boom signatures.) Various market studies conducted in the United States, Europe, and Japan indicate that the average mission for the airplane may be approximately 3500 nautical miles, with 750 of the miles (21 percent) flown subsonically. While the split between supersonic and subsonic flight hours will depend on a particular airline's route structure, careful consideration of the impact of the propulsion system installation on both supersonic and subsonic cruise performance is likely to be critical to the operational success of the aircraft.
Installing a propulsion system in the HSCT