[′grau̇nd‚wȯd·ər]
(hydrology)
All subsurface water, especially that part that is in the zone of saturation.
McGraw-Hill Dictionary of Scientific & Technical Terms, 6E, Copyright © 2003 by The McGraw-Hill Companies, Inc.

Freshwater found beneath the Earth’s surface, usually in aquifers, that supply wells and springs.
Illustrated Dictionary of Architecture Copyright © 2012, 2002, 1998 by The McGraw-Hill Companies, Inc. All rights reserved
The following article is from The Great Soviet Encyclopedia (1979). It might be outdated or ideologically biased.

the underground water in the first permanent water-bearing stratum below the earth’s surface. It is formed chiefly as a result of the seepage of atmospheric precipitation and water from rivers, lakes, reservoirs, and irrigation ditches. In places groundwater reserves are replenished by water moving upward from deeper strata (for example, by water from artesian basins), as well as by the condensation of water vapor.

Since groundwater is not usually covered with rocks impermeable to water and since the water-permeable layer is not always filled to capacity, the surface of the groundwater is free and not under pressure. In some places where there is a local water-resistant cover, the groundwater acquires local pressure (the magnitude of the pressure is determined by the groundwater level in the adjacent areas that do not have a water-resistant cover). When a borehole or an excavated well reaches the groundwater, its level (the so-called water table) is set at the depth where the groundwater was found. The areas of the feeding and spread of groundwater coincide. As a result, the conditions under which groundwater is formed and its regime possess features that distinguish it from deeper artesian water. Unlike the latter, groundwater is sensitive to all atmospheric changes. The surface of groundwater varies from season to season, rising in wet seasons and falling in dry periods. The yield, chemical composition, and temperature of groundwater also vary. Near rivers and other bodies of water, changes in the level, rate of flow, and chemical composition of groundwater are determined by the hydraulic relation between the groundwater and the surface water and the letter’s regime. The flow of groundwater over a long period of time is roughly equal to the amount of water entering by percolation. Intensive processes of percolation and of underground flow, accompanied by leaching of the soil and rocks, develop in a moist climate. Readily soluble salts-chlorides and sulfates-are removed from the soil and rocks. Prolonged water exchange results in the formation of fresh groundwater mineralized only by the relatively poorly soluble salts (mostly calcium hydrocarbonate). No underground flow occurs in arid, warm climates (in dry steppes and semidesert and desert regions) owing to the short duration and small amount of atmospheric precipitation, as well as to the poor drainage of the region. In these regions evaporation is dominant on the expenditure side of the groundwater balance, and the water becomes saline.

The differences in the conditions under which groundwater is formed determine the zonation of its geographical distribution, which is closely related to the zonation of the climate and soil and plant cover. Fresh (or slightly mineralized) groundwater is common in wooded, forest-steppe, and steppe regions. Salty groundwater predominates on plains in regions where there are dry steppes, semideserts, and deserts; here, fresh water occurs only sporadically.

The most substantial reserves of groundwater are concentrated in the alluvial deposits of river valleys, in the alluvial cones of piedmont regions, and in the shallow masses of fissured and karstic limestones (less commonly in fissured igneous rock).

Because of its relative availability, groundwater is extremely important in the economy as a source of water supply for industries, cities, villages, and populated rural areas. 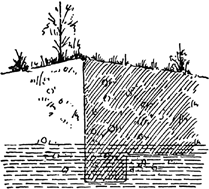 groundwater
Water, near the surface of the ground, which passes through the subsoil.
McGraw-Hill Dictionary of Architecture and Construction. Copyright © 2003 by McGraw-Hill Companies, Inc.

Feedback
Flashcards & Bookmarks ?
Please log in or register to use Flashcards and Bookmarks. You can also log in with
Flashcards ?
My bookmarks ?
+ Add current page to bookmarks
Mentioned in ?
References in periodicals archive ?
Recent data from Mars Global Surveyor suggest that liquid water may exist just below the surface in Tare places on the planet and the 2001 Mars Odyssey will be mapping subsurface water reservoirs on a global scale.
Life on MARS
The studies cited above emphasize the analyses of heat conduction in soils and rocks, ignoring heat convection caused by subsurface water flow.
Disturbances of Temperature-Depth Profiles by Surface Warming and Groundwater Flow Convection in Kumamoto Plain, Japan
According to these values, deep hypoxia conditions have been attributed to the presence of the southern and northern sills, which impede circulation (Sievers & Silva, 2008; Schneider et al., 2014), and to the input of low-oxygen Equatorial Subsurface Waters (EsSw) (Silva & Vargas, 2014).
Deep ventilation event during fall and winter 2015 in the Puyuhuapi Fjord (44.6[degrees]S)
The court, though, said it was clear that the policy excluded losses caused directly or indirectly by subsurface water pressure, which would include the damage to the other property.
Unusual Risks of Pool Ownership
According to a report issued by Ashghal, the authority is working to launch a mega pilot plant for the dewatering of swelling groundwater and subsurface water, to be set up in south Doha and completed in six different phases over five years.
Rising water problematic to Qatar\ s projects
The body is also working to launch a mega pilot plant for the dewatering of swelling groundwater and subsurface water in the country, to be set up in south Doha and completed in six different phases over five years, Al Sharq reported.
Rising water table \ challenging\ Doha construction
For this purpose subsurface water samples were collected and filtered by using glass-fiber membrane filter paper (Whatman GF/C type 47 mm in diameter) at a pressure of 0.7 bars.
Effect of Supplementary Feed Fertilizer and Physico-Chemical Parameters on Pond Productivity Stocked With Indian Major Carps in Monoculture System
Ohio US-based water management products and solutions firm Advanced Drainage Systems Inc (NYSE: WMS) said that US aviation regulator the Federal Aviation Administration has approved polypropylene pipe for subsurface water collection and disposal at civilian airports.
US air regulator OKs polypropylene pipe for civilian airports
Research done on the use of constructed wetlands for the treatment of hydrocarbons in waters Type of Plant(s) Used Configuration contaminant of the plantation Subsurface water Salix babylonica HF contaminated with gasoline-ethanol Wastewaters Typha latifolia HFSS contaminated with - Lemna minor diesel (Control) Subsurface waters Ceratophyllum HFS with hydrocarbons demersum and and cyanide Potamageton spp Effluents from Salix, Phragmites, HFSS aired BTEX refinery Schoenoplectus, and non-aired process Juncus and Cornus.
Fitorremediacion en aguas y suelos contaminados con hidrocarburos del petroleo
Build about 20 miles of horizontal drains to remove subsurface water that causes landslides.
State picks Highway 20 contractor
My stand was in a low, eroded wash, where subsurface water -- a disappearing treasure out here -- may have no permanent surface appearance.
White-tailed deer in Kansas have to be a different breed
"If those plumes are connected with the subsurface water ocean we are confident exists under Europa's crust, then this means that future investigations can directly investigate the chemical makeup of Europa's potentially habitable environment without drilling through layers of ice.
Evidence of Water Vapor Venting Off Jupiter Moon