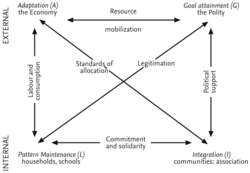 the four-fold set of functional ‘problems’ identified by PARSONS (1953), and deriving from Bales (1950), in which any system of action and all social systems and societies are seen as required to cope with the following (see Fig. 34):