1
1.
a. the warmest season of the year, between spring and autumn, astronomically from the June solstice to the September equinox in the N hemisphere and at the opposite time of year in the S hemisphere
b. (as modifier): summer flowers
2. the period of hot weather associated with the summer

2
1. a large horizontal beam or girder, esp one that supports floor joists
2. another name for lintel
3. a stone on the top of a column, pier, or wall that supports an arch or lintel
Collins Discovery Encyclopedia, 1st edition © HarperCollins Publishers 2005

[′səm·ər]
(astronomy)
The period from the summer solstice to the autumnal equinox; popularly and for most meteorological purposes, it is taken to include June through August in the Northern Hemisphere, and December through February in the Southern Hemisphere.
McGraw-Hill Dictionary of Scientific & Technical Terms, 6E, Copyright © 2003 by The McGraw-Hill Companies, Inc. springer, 1: S
1. The impost or place where the vertical support for an arch 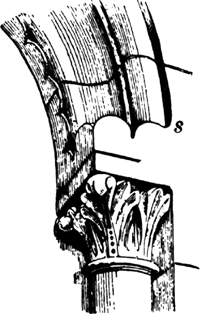 summer, 4: S
1. A horizontal beam supporting the ends of floor joists or resting on posts and supporting the wall above; also called a summertree.
2. Any large timber or beam which serves as a bearing surface.
3. The lintel of a door or window; a breastsummer.
4. A stone laid on a column and serving as a support for construction above, as in the construction of an arch.
McGraw-Hill Dictionary of Architecture and Construction. Copyright © 2003 by McGraw-Hill Companies, Inc.

String manipulation and pattern matching language by Klint & Sint at CWI in the late 1970s. It was recently used as the input and implementation language for the Dataflow Compiler Project at CWI.

Feedback
Flashcards & Bookmarks ?
Please log in or register to use Flashcards and Bookmarks. You can also log in with
Flashcards ?
My bookmarks ?
+ Add current page to bookmarks
Mentioned in ?
References in classic literature ?
If I can find a publisher for it it will probably be out next summer or fall."
View in context
Now, it is known that in the shallow sea on the Arctic coast of America the bottom freezes, [19] and does not thaw in spring so soon as the surface of the land, moreover at greater depths, where the bottom of the sea does not freeze the mud a few feet beneath the top layer might remain even in summer below 32 degs., as in the case on the land with the soil at the depth of a few feet.
View in context
May herself could not understand his obscure reluctance to fall in with so reasonable and pleasant a way of spending the summer. She reminded him that he had always liked Newport in his bachelor days, and as this was indisputable he could only profess that he was sure he was going to like it better than ever now that they were to be there together.
In the hot summer light his floridness seemed heavy and bloated, and but for his erect square- shouldered walk he would have looked like an over-fed and over-dressed old man.
View in context
A summer on the loftiest height, with cold fountains and blissful stillness: oh, come, my friends, that the stillness may become more blissful!
View in context
Harling, did you ever hear about what happened up in the Norwegian settlement last summer, when I was threshing there?
`What would anybody want to kill themselves in summer for?
View in context
This they have done unmurmuringly and alone; and now, far and wide, flower blessings fall upon them, and the summer winds bear the glad tidings unto those who droop in sorrow, and new joy and strength it brings, as they look longingly for the friends whose gentle care hath brought such happiness to their fair kindred.
IN a quiet, pleasant meadow, Beneath a summer sky, Where green old trees their branches waved, And winds went singing by; Where a little brook went rippling So musically low, And passing clouds cast shadows On the waving grass below; Where low, sweet notes of brooding birds Stole out on the fragrant air, And golden sunlight shone undimmed On al1 most fresh and fair;-- There bloomed a lovely sisterhood Of happy little flowers, Together in this pleasant home, Through quiet summer hours.
View in context
Let the court not be paved, for that striketh up a great heat in summer, and much cold in winter.
View in context
But her musings did not stop here, for she was wise enough to think that by a good and merciful adjustment this must be human nature, and that the old sexton, with his plans for next summer, was but a type of all mankind.
She took a Bible from the shelf, and read; then, laying it down, thought of the summer days and the bright springtime that would come--of the rays of sun that would fall in aslant, upon the sleeping forms--of the leaves that would flutter at the window, and play in glistening shadows on the pavement--of the songs of birds, and growth of buds and blossoms out of doors--of the sweet air, that would steal in, and gently wave the tattered banners overhead.
View in context