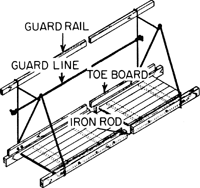 swinging scaffold
A scaffold which is suspended by ropes or cables from a block and tackle attached by roof hooks; can be raised or lowered to any height.
McGraw-Hill Dictionary of Architecture and Construction. Copyright © 2003 by McGraw-Hill Companies, Inc.

Feedback
Flashcards & Bookmarks ?
Please log in or register to use Flashcards and Bookmarks. You can also log in with
Flashcards ?
My bookmarks ?
+ Add current page to bookmarks
Mentioned in ?
References in periodicals archive ?
Located within the Innova Industrial Park, the 12,000-square-foot building features two classrooms with capacity for 25 students each, plus a large open-concept training area with 30-foot-high ceilings for scaffolding, fork trucks and suspended swing stage (work platform) programs.
Carpenters' union opens Thunder Bay training centre
Among selected trunk muscles, RA and EO muscles were active in all subjects in the entire gait cycle, while MF was active in 100% of subjects during loading response and pre-swing stages and in 90% of subjects in terminal swing stage during the over-ground walking (Figure 1).
The activation pattern of trunk and lower limb muscles in an electromyographic assessment; comparison between ground and treadmill walking
For buildings higher than 300 feet, workers use a swing stage attached to a steel cable, Mr.
Washers fly high in bright, shining job
First Coast Scaffold is a Jacksonville, Florida, based commercial and industrial scaffolding company providing a line of system scaffolding, frame scaffolding, swing stages, safety equipment and accessories.
Brace Integrated Services Acquires Florida Scaffolding Firm
I guarantee our mailboxes in Ohio and other swing stages will be deluged.
7 trends to watch in direct mail marketing
Our findings showed that there were significant differences between MS and healthy adults in the relative phase coordination between knee and ankle joints at heel contact and mid stance stages, but not at toe off and mid swing stages of the gait cycle.
Intra-limb coordination in gait pattern in healthy people and multiple sclerosis patients
In particular, the four swing stages are described clearly enough to practice in the most confined space and come replete with a helpful commentary: "Once you have learned these four simple positions and the guiding principles behind the swing, the essentials of the swing are in place."
Golf: Must-haves to keep one shot ahead of the rest; BOOK REVIEWS
Lift equipment or swing stages are normally necessary to perform inspection, material sampling, and water-testing activities.
Exterior wall maintenance: know the basics. Look long-term. Keep it simple