Radar, airborne or satellite-borne, that uses special signal processing to produce high-resolution images of the surface of the Earth (or another object) while traversing a considerable flight path. The technique is somewhat like using an antenna as wide as the flight path traversed, that being the large “synthetic aperture,” which would form a very narrow beam. Synthetic aperture radar is extremely valuable in both military and civil remote-sensing applications, providing surface mapping regardless of darkness or weather conditions that hamper other methods.

Resolution is the quality of separating multiple objects clearly. In radar imaging, fine resolution is desired in both the down-range and cross-range dimensions. In radar using pulses, down-range resolution is achieved by using broad-bandwidth pulses, the equivalent of very narrow pulses, allowing the radar to sense separate echoes from objects very closely spaced in range. This technique is called pulse compression; resolution of a few nanoseconds (for example, 5 ns = 5 × 10-9 s gives about 0.75 m or 2.5 ft resolution) is readily achieved in modern radar.

Cross-range resolution is much more difficult to achieve. Generally, the width of the radar's main beam determines the cross-range, or lateral, resolution. For example, a 3° beam width resolves targets at a range of 185 km (100 nautical miles) only if they are separated laterally by more than 100 m (330 ft), not nearly enough resolution for quality imaging.

However, surface objects produce changing Doppler shifts as an airborne radar flies by. In side-looking radar (see illustration), even distant objects actually go from decreasing in range very slightly to increasing in range, producing a Doppler-time function. If the radar can sustain high-quality Doppler processing for as long as the “footprint” of the beam illuminates the scene, these Doppler histories will reveal the lateral placement of objects. In fact, if such processing can be so sustained, the cross-range resolution possible is one-half the physical width of the actual antenna being used, a few feet perhaps. Furthermore, this resolution is independent of range, quite unlike angle-based lateral resolution in conventional radar.

Many synthetic aperture radars use other than just a fixed side-looking beam. Spotlighting involves steering the beam to sustain illumination for a longer time or to illuminate a designated scene at some other angle. The principles remain unchanged: fine resolution in both down-range and cross-range dimensions (achieved by pulse compression and Doppler processing, respectively) permits imaging with picture cells (pixels) of remarkably fine resolution. Many synthetic aperture radars today achieve pixels of less than 1 m (3 ft) square. 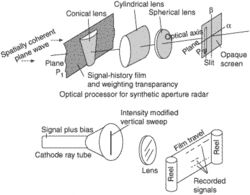 Recording of SAR signal on photographic film with the aid of a CRT (cathode ray tube).
An airborne radar that produces an image of the scene that is similar to, but not identical with, an optical photograph. A cross-range resolution obtained from a Doppler frequency, along with range resolution, forms the basis of a synthetic aperture radar. The image seen by radar is not the same as observed by optical devices. Radar and optical images differ because of a large difference between the frequencies involved; optical frequencies are approximately 100,000 times higher than radar frequencies. The SAR can operate from long range and through clouds or other atmospheric effects that limit optical and infrared imaging sensors. The resolution of a SAR can be made independent of range, an advantage over passive optical imaging, where the resolution worsens with increasing range. Range resolution is a function of antenna-beam width, whereas azimuth resolution is a function of pulse width. Synthetic aperture radars that map areas of the earth's surface with resolutions of a few feet or meters can provide information about the nature of the terrain and what is on the surface. If the radar is stationary and the target is moving, then such a radar is called an inverse synthetic aperture radar (ISAR).

Feedback
Flashcards & Bookmarks ?
Please log in or register to use Flashcards and Bookmarks. You can also log in with
Flashcards ?
My bookmarks ?
+ Add current page to bookmarks
TheFreeDictionary presents:
Write what you mean clearly and correctly.
Mentioned in ?
References in periodicals archive ?
April 2019, Researchers from SRI International have successfully demonstrated new Interferometric Synthetic Aperture Radar (InSAR) capabilities with a radar developed for CubeSat-based earth science applications.
InSAR Market 2019 - Global Sales, Price, Revenue, Gross Margin and Market Share Forecast Report
Xing, C.-W Qiu et al., "Resolution enhancement for inversed synthetic aperture radar imaging under low SNR via improved compressive sensing," IEEE Transactions on Geoscience and Remote Sensing, vol.
High-Resolution ISAR Imaging with Wideband V-FM Waveforms
Sew, "A new unmanned aerial vehicle synthetic aperture radar for environmental monitoring," Progress In Electromagnetics Research, Vol.
An efficient SAR jammer with Direct Radio Frequency Processing (DRFP)
Just as mobile telephones are now miniscule compared to the "bricks' beloved of stockbrokers in the mid-1980s, radar payloads are a fraction of the size of the Northrop Grumman AN/APY-7 synthetic aperture radar that equips the E-8C.This has enabled the migration of the technology on to drones, which are in fact ideally suited to perform the long and arduous flight profiles required to build up a radar image of the ground below.
The drone's synthetic eye
The ASAR (Advanced Synthetic Aperture Radar) sensor is designed to ensure continuity of the ERS SAR instrument.
Synthetic aperture radar interferometry coherence analysis
Now, with the arrival of the synthetic aperture radar (SAR) that can penetrate through clouds, this problem is being resolved.
Satellite remote sensing can improve chances of achieving sustainable health
Their joint initiative involves the matching of multiple radar images of the same site, acquired using instruments such as the synthetic aperture radar aboard ESA's ERS satellite, so that tiny movements are highlighted.
Italy earthquake
Interferometric synthetic aperture radar (InSAR) combines data from images taken from the same point in space at two different times.
Orbiting radar spots old nuclear-test sites
EADS Astrium has recently completed trials of its Airborne Synthetic Aperture Radar (SAR), called the MicroSAR Airborne Demonstrator.
EADS Astrium
We envision SBR will act as the forward eyes for strike platforms and other Intelligence, Surveillance, and Reconnaissance assets by detecting surface movers (Ground Moving Target Indication) and rapidly imaging stationary targets (Synthetic Aperture Radar).
The continuing legacy of space and transformation
DIG will market a version of eCognition in 2002 that will contain advanced synthetic aperture radar (SAR) functionalities allowing users worldwide to quickly extract information from Radarsat-1 for a broad range of applications.
RSI and DIG sign agreement
Raytheon Electronic Systems, El Segundo, Calif., is being awarded a $5,809,196 cost-plus-fixed-fee contract to perform a demonstration of a Synthetic Aperture Radar (SAR) System in a dedicated pod on an F-14 aircraft.
Raytheon Electronic Systems