amulet (ămˈyəlĭt), object or formula that credulity and superstition have endowed with the power of warding off harmful influences. The use of the amulet to avert danger and to dispel evil has been known in different religions and among diverse peoples. Like the talisman and the charm, the amulet is believed to be the source of an impersonal force that is an inherent property of the object rather than the manifestation of a deity working through that object (see fetish and taboo). Although amulets are most often worn on the body, hanging from the neck or strapped to the arm or leg, they may also serve as protective emblems on walls and doorways (e.g., the Jewish mezuzah). Sometimes the amulet consists of a spoken, written, or drawn magic formula, such as abracadabra and the magic square, or of a symbolic figure, such as the wheel of the sun god and the Aryan swastika. In many cultures the teeth, claws, and other parts of an animal are believed to communicate their properties to the wearer. Although belief in amulets is very widespread in primitive societies, it has survived in modern civilization. Common superstition has endowed such things as the rabbit's foot with the property of being able to bring good luck. In some modern religious practices, amulets such as the Jewish phylactery and the Christian cross are more strictly related to ritual and serve as personal reminders to the wearers of their relationship to God.
The Columbia Electronic Encyclopedia™ Copyright © 2022, Columbia University Press. Licensed from Columbia University Press. All rights reserved. 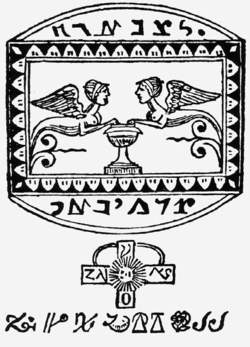 A talisman reputed to have the power of causing the stars to fall from heaven. Courtesy Fortean Picture Library.

The word "talisman" is from the Greek root teleo, meaning "to consecrate." A talisman is a man-made object endowed with magical power, often used for purposes of protection. A rosary, St. Christopher medal, or crucifix are all, in effect, talismans. The most potent of magic is that done for a specific purpose by the person most concerned. Therefore, the normal, store-bought crucifix or St. Christopher medal are too general and nonpersonal to be as effective as they might be. However, as talismans they would certainly be more powerful if constructed from scratch and could be made even more potent by a ritual consecration, as the name implies.

Pierre de Bresche, in Traité des Talismans (1671), said: "A talisman is nothing else than the seal, figure, character, or image of celestial omen, planet, or constellation; impressed, engraved, or sculptured upon a sympathetic stone or upon a metal corresponding to the planet, by a workman whose mind is settled and fixed upon his work and the end of his work without being distracted or dissipated in other unrelated thoughts; on the day and at the hour of the planet; in a fortunate place;

during fair, calm, weather and when the planet is in the best aspect that may be in the heavens, the more strongly to attract the influences proper to an effect depending upon the power of the same and on the virtues of its influences."

De Bresche makes an important point when he says, " . . . by a workman whose mind is settled and fixed upon his work and the end of his work . . . " In other words, in making a talisman, the maker must concentrate on the engraving or drawing he is doing and must also concentrate on the "end" or purpose for which the talisman is being made, to the absolute exclusion of all else.

A talisman can be of any shape and of virtually any material. Many are constructed on parchment or paper. Others are engraved into metal, the metal specifically chosen (as de Bresche mentioned, above) according to the talisman's purpose. For example, silver is the metal of the Moon, so silver would be used to make a talisman for the purposes connected with the Moon: dreams, theft, or merchandise. To go a step further, it should be made on a Monday—the Moon day—and also made in the hour of the Moon, which would be the first hour of the daylight or the nighttime hours (see Planetary Hours).

The metals associated with the days of the week and their properties are as follows:

According to the Hermetic Order of the Golden Dawn, a talisman is "a magical figure charged with the Force which it is intended to represent." It is so charged by inscription and consecration. The inscription can, as mentioned, be written or engraved. For inscriptions written on paper or parchment, the ink is often handmade and the pen is a quill made from a feather. The consecration is completed when the paper is sprinkled with salted water and held in the smoke of burning incense.

What is put on the talisman is the most important part of the ritual. It can be a word or words, or it can be a sigil or traditional design. Many medieval talismans show geometric designs in combination with magical symbols. Following the doctrine that the more energy you put into the making of the talisman, the more powerful it will be, any writing is usually done in one of the magical alphabets, which require a great deal of concentration to use. The sigils can be constructed from such things as magical squares, again giving greater power to their meanings. Great care has to be exercised when constructing magic squares. When drawn on parchment,

the squares should be marked in black ink with the numbers or letters in red ink. All should be drawn with the parchment set up so that the maker's shadow does not fall on the parchment. The red lines should not touch the black anywhere. As with all magical items, it should be appropriately consecrated before use.

The first step in making a talisman is to determine precisely how it will be used. Will it be for protection, to bring love, for healing, to gain power, or for some other purpose? Once the need has been determined, that need must then be reduced to a single sentence. From there, the Witch or magician can decide which of the planets and the days of the week would be most appropriate for that purpose. For example, Tuesday is appropriate for matrimony, while Friday is appropriate for love. Thursday is good for desires. Which of the three would be best suited for the talisman? Will it be affecting a new love, the desire for love, or a state of marriage that already exists?

Once the proper sigil has been determined and applied to the talisman, and it has been personalized for the one who will use it, the object must be consecrated before it can be used. So long as it is worn, it will continue to work and to attract the required forces from the universe.

an object superstitiously believed to possess the power to bring good fortune to its owner. Primitive peoples often placed their faith in talismans—amulets or charms—to compensate for their weakness in the struggle against nature. Vestiges of this faith in talismans have survived in such superstitious or religious practices as placing a horseshoe above the entrance to one’s home, and wearing small icons, crosses, or amulets.

1. a stone or other small object, usually inscribed or carved, believed to protect the wearer from evil influences
2. anything thought to have magical or protective powers
Collins Discovery Encyclopedia, 1st edition © HarperCollins Publishers 2005

Feedback
Flashcards & Bookmarks ?
Please log in or register to use Flashcards and Bookmarks. You can also log in with
Flashcards ?
My bookmarks ?
+ Add current page to bookmarks
Mentioned in ?
References in periodicals archive ?
Initial exploration by Talisman will include surface geochemical sampling and mapping along the north-western extension of the Lucknow Fault as well as further to the east along a north-south trending fault where previous sampling has identified copper anomalism and low-level gold anomalism.
Talisman Mining Ltd - Farm-in to the Lucknow High-Grade Gold Project
No information was previously available about whether or not Syria acquired this electronic defense system; however, the aircraft was recently spotted with the Talisman, which confirmed the Syrian Air Force's use.
Syrian MiG-29 jet equipped with Belarusian airborne defense system
Renault Kuwait encourages its customers to visit the showroom situated in Al Rai and avail of the opportunity to explore a world of exciting features that come with the TALISMAN. For more information on Renault Al Babtain, please visit www.renault-kuwait.com .
Discover the Perfect Blend Between Comfort and High Performance on the Road With the Renault Talisman
The snake, representing protection in Ancient Egypt, is the symbol that holds all talisman charms together.
Azza Fahmy's New Collection Salutes Talismans
Following its unveiling to the media on Monday, the Renault Talisman - along with the Estate version - will be presented at this year's Frankfurt Motor Show, which opens its gates to the public on September 17.
Talisman has close attention to detail
The deal, which is subject to regulatory approval, is expected to close inthe second quarter of 2015, Talisman said in a statement.
Repsol deal to lift energy giant into big league
Wendy McClay, one of two directors at Kenilworth's The Talisman Theatre, said: "You may not know the tunes when you enter the auditorium but you will certainly be humming them by the time you leave.
Musical set to be a howler; PREVIEW
Schlesinger formed Talisman in 1994 and continued rebuilding and marketing shopping centers, such as Roswell Town Center, Roswell, Ga.; Knoxville Marketplace, Knoxville, TN; Towson Marketplace, Towson, MA; and Southland Mall, and Miracle Marketplace, Miami, Fla..
James A. Schlesinger, fashion outlet mall developer, dead at 65
The accolade recognises the firm as one of Talisman Sinopec's key contractors for demonstrating commitment to improving health and safety, environmental or operational integrity performance.
Offshore firm rewarded for safety policy
* The report provides a comparison of Talisman's operations in the Eagle Ford shale on some key parameters with the operations of other key operators in the shale play
Talisman Rumored to be Selling Eagle Ford Assets in South Texas for Upto US$2 Billion
Some observers have pressed Talisman (TSX:TLM) to shed Kurdistan, but CEO Hal Kvisle said the company will take its time to explore its options, one of which could be bringing on new partners to help develop the resource.
Talisman says Kurdistan oil discovery "giant," may seek joint-venture partner