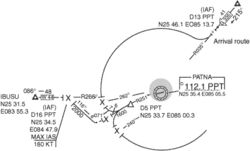 Routes identified in an instrument approach procedure by which aircraft may proceed from the en route phase of a flight to an initial approach fix. Also called terminal routes.
An Illustrated Dictionary of Aviation Copyright © 2005 by The McGraw-Hill Companies, Inc. All rights reserved

Feedback
Flashcards & Bookmarks ?
Please log in or register to use Flashcards and Bookmarks. You can also log in with
Flashcards ?
My bookmarks ?
+ Add current page to bookmarks
Mentioned in ?
References in periodicals archive ?
Some of the benefits of using GPS routing to an ILS rather than conventional navaid-based routing include designing terminal routes for noise abatement, reducing flying miles by eliminating course reversals, and allowing locator outer markers to be shut down, thus saving on maintenance expenses.
The GPS/ILS approach: approaches are usually either completely navaid-based or completely RNAV based. A new approach design combines RNAV routing with a conventional ILS final segment. Ready?
The mobile data terminal routes the data package over the existing voice grade radio system to the FIU, where the signal is converted into a Modbus command and the information goes into the FIU.
MOSCAD In Oil Pipeline Gathering System Application