tetracycline (tĕˌtrəsīˈklēn), any of a group of antibiotics produced by bacteria of the genus Streptomyces. Effective against a wide range of Gram positive and Gram negative bacteria, tetracycline interferes with protein synthesis in these microorganisms (see Gram's stain). It has been used to treat rickettsial bacterial infections such as Rocky Mountain spotted fever, some eye, respiratory, intestinal, and urinary infections, some kinds of acne, and some diseases where the infecting microorganism is resistant to penicillin (see drug resistance). Tetracycline may cause permanent discoloration of developing teeth, and it is not given to pregnant and lactating women and growing children. Because of the development of strains of microorganisms resistant to the tetracyclines, these antibiotics have lost some of their usefulness. Aureomycin is a trade name for the derivative chlortetracycline, and Terramycin is a trade name for oxytetracycline. Omadacycline (trade name Nuzyra) is an antibiotic derived from tetracycline that has been chemically altered to block bacterial resistance.
The Columbia Electronic Encyclopedia™ Copyright © 2022, Columbia University Press. Licensed from Columbia University Press. All rights reserved.
The following article is from The Great Soviet Encyclopedia (1979). It might be outdated or ideologically biased. 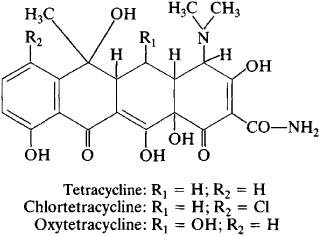 [‚te·trə′sī‚klēn]
(microbiology)
Any of a group of broad-spectrum antibiotics produced biosynthetically by fermentation with a strain of Streptomyces aureofaciens and certain other species or chemically by hydrogenolysis of chlortetracycline.
C22H24O8N2 A broad-spectrum antibiotic belonging to the tetracycline group of antibiotics; useful because of broad antimicrobial action, with low toxicity, in the therapy of infections caused by gram-positive and gram-negative bacteria as well as rickettsiae and large viruses such as psittacosis-lymphogranuloma viruses.
McGraw-Hill Dictionary of Scientific & Technical Terms, 6E, Copyright © 2003 by The McGraw-Hill Companies, Inc.

Feedback
Flashcards & Bookmarks ?
Please log in or register to use Flashcards and Bookmarks. You can also log in with
Flashcards ?
My bookmarks ?
+ Add current page to bookmarks
Mentioned in ?
References in periodicals archive ?
Under the described experimental conditions standard calibration curves for terbutaline sulphate and tetracycline HCl with eosin Y were constructed by plotting absorbance against concentration (Fig.
The specificity of the method was investigated by observing any interference encountered from the common excipients of the pharmaceutical formulations by measuring the absorbance of solutions containing 2 g/mL-1 terbutaline sulphate and 20 g/mL-1 tetracycline HCl separately and various amounts of diverse species up to 100 fold excess in a final volume of 5 mL.
Effect of excipients for assay of terbutaline sulphate and tetracycline HCl.
Spectrophotometric Determination of Terbutaline Sulphate and Tetracycline Hydrochloride via ion pair Complex Formation Using Eosin Y