[′thər·məl ′shäk]
(mechanics)
Stress produced in a body or in a material as a result of undergoing a sudden change in temperature.
McGraw-Hill Dictionary of Scientific & Technical Terms, 6E, Copyright © 2003 by The McGraw-Hill Companies, Inc.

The strain produced in a material due to sudden changes in temperature.
Illustrated Dictionary of Architecture Copyright © 2012, 2002, 1998 by The McGraw-Hill Companies, Inc. All rights reserved
The following article is from The Great Soviet Encyclopedia (1979). It might be outdated or ideologically biased.

a one-time, uneven change in the temperature of a body that occurs at rapid rates (tens or hundreds of degrees per sec). The term usually refers to cases of rapid heating, but abrupt cooling—for example, when a cold stream of liquid strikes a heated glass vessel—can also be considered thermal shock. In thermal shock caused by brief, swift surface heating, destruction occurs in many cases not in the heating stage but rather during the subsequent cooling, which also takes place at a rapid rate. The decisive factors in thermal shock are the development of a temperature gradient in a very short time (fractions of a second) and the resulting deformations and stresses, which cause a change in shape or break in continuity (formation of cracks) or, in the limiting case, destruction.

When a body is heated rapidly, its outer layers expand, whereas the inner layers, which are left unheated, resist expansion. Compressive stress arises in the more heated layers, and tensile stress in the less heated layers. When the stress reaches the limit of compressive or tensile strength, the material disintegrates. In most materials, compressive strength is greater than tensile strength; therefore, disintegration takes place in the area where tensile stress is operating—that is, a crack forms in the less heated layers and then spreads throughout the body after the cessation of heating. Ceramics, glass, and other brittle materials that conduct poorly are destroyed in this way by thermal shock.

In most cases, the effect of thermal shock on metals and alloys is limited to a change in shape. Because of the high thermal conductivity of such materials, rapid heating does not produce temperature gradients that generate stresses greater than the strength of the material. In addition, because of the inherently great plasticity of metals and alloys, temperature stresses do not exceed the yield point in most cases.

Thermal shock is most dangerous to materials with a high coefficient of thermal expansion, low thermal conductivity, a high modulus of elasticity, a wide range of ultimate strength, and low plasticity. The effect of thermal shock is intensified by the presence of sharp changes in cross section, such as openings or grooves, which concentrate the thermal stresses and render plastic deformation difficult.

The sudden stress produced in a body or in a material as a result of a sudden temperature change.
McGraw-Hill Dictionary of Architecture and Construction. Copyright © 2003 by McGraw-Hill Companies, Inc. 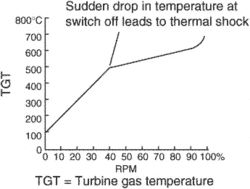 A stress condition occurring in an engine as a result of a rapid change of temperature. When an aircraft is decelerated rapidly, the engine RPM as well as the temperature decay rapidly, resulting in thermal shock.
An Illustrated Dictionary of Aviation Copyright © 2005 by The McGraw-Hill Companies, Inc. All rights reserved

Feedback
Flashcards & Bookmarks ?
Please log in or register to use Flashcards and Bookmarks. You can also log in with
Flashcards ?
My bookmarks ?
+ Add current page to bookmarks
Mentioned in ?
References in periodicals archive ?
It has 24 times higher thermal shock resistance than one of the leading solid-state laser gain materials.
Photonics crystal ball: A new crystal doping technique could enable more powerful lasers
The main objective of this paper is to investigate the evolution and interaction of surface thermal cracks under thermal shock load.
Evolution and interaction of surface cracks under thermal shock load
The company offers accelerated aging, distribution simulation, package strength, integrity, physical shock, thermal shock, vibration, compression, unitized load testing, leakage and other validation services at both locations.
DDL grows testing capacity
In application process, they have to support the high temperature difference or the thermal shock due to the high-heat flow produced in reentry and flight, for during the high-speed flight course, the aircraft will have friction with the air and produce the transient state high temperature and high-heat flow [1-4].
Effect of repeated thermal shock on mechanical properties of Zr[B.sub.2]-SiC-BN ceramic composites
For avionics and aerospace systems, the device is the industry's first DLA-approved wet tantalum capacitor to combine a reverse voltage of 1.5 V at +85[degrees]C with improved vibration (sine: 50 g; random: 27.7 g) and thermal shock (300 cycles) capabilities.
Tantalum-cased wet tantalum capacitor features glass-to-tantalum hermetic seal
Fully sealed to IP65 standards, the tablet meets MIL-STD-810F to protect against dust, extreme temperatures, thermal shock, drops to concrete, immersion in water, rain and humidity.
Rugged tablet's touchscreen is viewable indoors and outside
A thermal shock test of the III-V thin-film solar cells was performed 1500 times at temperature cycles of -40[degrees]C~150[degrees]C at a ramp setting of 40[degrees]C/min and a dwell time of 5 min.
Reliability analysis of III-V solar cells grown on recycled GaAs substrates and an electroplated nickel substrate
Fill control, flow dampening, and thermal shock reduction are a few application examples where the Expeditor may improve process performance and prevent damage to equipment.
Valve controller with intermediate control improves plant operation
Bonds display strength greater than 15,000 psi, hold in temperatures ranging from -450 to +400[degrees] F, and are resistant to thermal shock, impact, vibration, and substances such as water, oil, and select fuels.
Thermally conductive epoxy
Ceramic chip capacitors will be placed on the bottom to control for thermal shock.
Wave solder thermal profiling the right methodology will go a long way toward reducing defects
The new label is suitable for direct immersion into liquid nitrogen at-196 degrees Celsius and offers a cohesive bond high enough to withstand thermal shock, eliminating the problem of de-lamination.
Cryogenic label offers performance and economy
The hardened aluminum body will withstand thermal shock in compliance with the rigorous DIN (Deutsche Industrie Norm) and ISO (International Standards Organization) 10109-4 standards for optics.
Minox