direct conversion of heat into electric energy, or vice versa. The term is generally restricted to the irreversible conversion of electricity into heat described by the English physicist James P. Joule and to three reversible effects named for Seebeck, Peltier, and Thomson, their respective discoverers. According to Joule's law, a conductor carrying a current generates heat at a rate proportional to the product of the resistance (R) of the conductor and the square of the current (I). The German physicist Thomas J. Seebeck discovered in the 1820s that if a closed loop is formed by joining the ends of two strips of dissimilar metals and the two junctions of the metals are at different temperatures, an electromotive force, or voltage, arises that is proportional to the temperature difference between the junctions. A circuit of this type is called a thermocouple; a number of thermocouples connected in series is called a thermopile. In 1834 the French physicist Jean C. A. Peltier discovered an effect inverse to the Seebeck effect: If a current passes through a thermocouple, the temperature of one junction increases and the temperature of the other decreases, so that heat is transferred from one junction to the other. The rate of heat transfer is proportional to the current and the direction of transfer is reversed if the current is reversed. The Scottish scientist William Thomson (later Lord Kelvin) discovered in 1854 that if a temperature difference exists between any two points of a current-carrying conductor, heat is either evolved or absorbed depending upon the material. (This heat is not the same as Joule heat, or I2R heat, which is always evolved.) If heat is absorbed by such a circuit, then heat may be evolved if the direction of the current or of the temperature gradient is reversed. It can be shown that the Seebeck effect is a result of the combined Peltier and Thomson effects. Magnetic fields have been shown to influence all these effects. Many devices based on thermoelectric effects are used to measure temperature, transfer heat, or generate electricity.
The Columbia Electronic Encyclopedia™ Copyright © 2013, Columbia University Press. Licensed from Columbia University Press. All rights reserved. www.cc.columbia.edu/cu/cup/

The direct conversion of heat into electrical energy, or the reverse, in solid or liquid conductors by means of three interrelated phenomena—the Seebeck effect, the Peltier effect, and the Thomson effect—including the influence of magnetic fields upon each. The Seebeck effect concerns the electromotive force (emf) generated in a circuit composed of two different conductors whose junctions are maintained at different temperatures. The Peltier effect refers to the reversible heat generated at the junction between two different conductors when a current passes through the junction. The Thomson effect involves the reversible generation of heat in a single current-carrying conductor along which a temperature gradient is maintained. Specifically excluded from the definition of thermoelectricity are the phenomena of Joule heating and thermionic emission. See Electromotive force (emf), Joule's law, Seebeck effect, Thermionic emission, Thomson effect

The most important practical application of thermoelectric phenomena is in the accurate measurement of temperature. The phenomenon involved is the Seebeck effect. Of less importance are the direct generation of electrical power by application of heat (also involving the Seebeck effect) and thermoelectric cooling and heating (involving the Peltier effect).

A basic system suitable for all four applications is shown schematically in the illustration. Several thermocouples are connected in series to form a thermopile, a device with increased output (for power generation or cooling and heating) or sensitivity (for temperature measurement) relative to a single thermocouple. The junctions forming one end of the thermopile are all at the same low temperature TL, and the junctions forming the other end are at the high temperature TH. The thermopile is connected to a device D which is different for each application. For temperature measurement, the temperature TL is fixed, for example, by means of a bath; the temperature TH becomes the running temperature T, which is to be measured; and the device is a potentiometer for measuring the thermoelectric emf generated by the thermopile. For power generation, the temperature TL is fixed by connection to a heat sink; the temperature TH is fixed at a value determined by the output of the heat source and the thermal conductance of the thermopile; and the device is whatever is to be run by the electricity that is generated. For heating or cooling, the device is a current generator that passes current through the thermopile. If the current flows in the proper direction, the junctions at TH will heat up, and those at TL will cool down. If TH is fixed by connection to a heat sink, thermoelectric cooling will be provided by TL. Alternatively, if TL is fixed, thermoelectric heating will be provided at TH. Such a system has the advantage that at any given location it can be converted from a cooler to a heater merely by reversing the direction of the current. 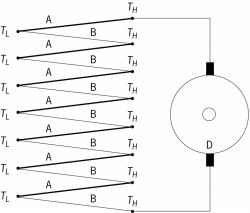 Thermopile, a battery of thermocouples connected in series

Thermoelectric power generators, heaters, or coolers made from even the best presently available materials have the disadvantages of relatively low efficiencies and concomitant high cost per unit of output. Their use has therefore been largely restricted to situations in which these disadvantages are outweighed by such advantages as small size, low maintenance due to lack of moving parts, quiet and vibration-free performance, light weight, and long life.

[¦thər·mō‚i‚lek′tris·əd·ē]
(physics)
The direct conversion of heat into electrical energy, or the reverse; it encompasses the Seebeck, Peltier, and Thomson effects but, by convention, excludes other electrothermal phenomena, such as thermionic emission. Also known as thermoelectric effect.
McGraw-Hill Dictionary of Scientific & Technical Terms, 6E, Copyright © 2003 by The McGraw-Hill Companies, Inc.

Feedback
Flashcards & Bookmarks ?
Please log in or register to use Flashcards and Bookmarks. You can also log in with
Flashcards ?
My bookmarks ?
+ Add current page to bookmarks
Mentioned in ?
References in periodicals archive ?
The denudation percentage [gamma] ([gamma]=50-[X.sub.NP]/4) of the orebody with respect to the total length of mineralization can be calculated using the thermoelectricity parameter: 1-I orebody, 26.5% to 71.5%; 2-II orebody, 61.5% to 76.5%; 2-IV orebody, 37.5% to 58%.
Characteristics of genetic mineralogy of pyrite and quartz and their indicating significance in the Gaosongshan Gold Deposit, Heilongjiang Province, NE China/Caracteristicas de mineralogia genetica de piritas y cuarzos y su importancia en el yacimiento aurifero de Gaosongshan, Provincia de Heilongjiang, al noreste de China
If it was trying to replace coal, wood and gas for households and thermoelectricity and self-generation for industries, did this constitute a strong constraint on market power?
Electricity in Quebec before Nationalization, 1919 to 1939
These energy flows are represented using the thermoelectricity analogy in Figure 1 where the Ts, Rs, Cs, and [??]s represent temperatures, thermal resistances, capacitances, and heat flows, respectively.
Performance of a Residential Building Energy Grey-Box Model Using Localized
Introduction to Thermoelectricity. Springer-Verlag, Berlin.
Coefficient of performance improvement in small thermoelectric refrigerators
This class can be utilized for thin film solar cell, photoelectrochemical hydrogen production, and thermoelectricity production as well as its application as a topological insulator [1-4].
Enhanced photoelectrochemical response from copper antimony zinc sulfide thin films on transparent conducting electrode
Thermoelectricity in metals and alloys, In: Physics for Science and Engineering, vol: 2, 259 pp.
Synthesis and thermopower of vanadium-doped bismuth-based (Bi-2223) high-[T.sub.c] superconductors
Good TE materials must have a high Seebeck coefficient, which enhances thermoelectricity, low electrical resistivity, which minimizes Joule heating, and low thermal conductivity, which sustains a large temperature gradient [2].
Fabrication of metal alloy-deposited flexible MWCNT buckypaper for thermoelectric applications
They cover the basics of heat transfer, experimental and numerical techniques for enhancing heat transfer, different industrial equipment based on heat transfer, porous media, nanofluids, and thermoelectricity.
Advances in industrial heat transfer
"Our discovery that a thermopower wave works best across these tubes because of their dual conductivity turns conventional thermoelectricity on its head.
Iranian Scientist Finds New Way to Generate Power
As the figure of merit (ZT) continues to increase through a continued research effort, the use of thermoelectricity for air cooling has become more feasible.
C[O.sub.2] transcritical vapor compression cycle with thermoelectric subcooler
Sommerfeld also did detailed work on wave mechanics, and his theory of electrons in metals proved valuable in the study of thermoelectricity and metallic conduction.
Suman, Seth. Crafting the Quantum: Arnold Sommerfeld and the Practice of Theory, 1890-1926
"Thermoelectricity makes it possible to cleanly convert heat directly into electrical energy in a device with no moving parts," said lead author Justin Bergfield, a doctoral candidate in the UA College of Optical Sciences.
New way to turn waste heat into power could make cars, factories more efficient